With less than three months until the 2020 election, former Vice President Joe Biden, leads President Trump in national polling. Despite this polling advantage, Peter Howley warns against assuming that Biden is certain to win in November. A combination of pollsters underestimating Trump’s support, the Republicans’ Electoral College advantage, and the possibility of the development a COVID-19 treatment or vaccine before the election could all help Trump to win, he writes.

Recent polls give the now confirmed Democratic presidential nominee, former Vice President, Joe Biden a strong lead over President Trump. The surprising thing is not that Trump’s support has fallen significantly but that it is still so strong. Despite his reckless handling of the coronavirus pandemic where it seems he has treated it more as a public relations problem as opposed to public health crisis, some 42 percent of those polled say they still support Trump. This compares to 48 percent for Biden. This gives Trump a solid base to work from as it is hard to imagine a sitting President who has done more to alienate Moderates at this stage in the election cycle.

The risk Trump’s support is being underestimated

Still with these poll numbers there is every reason to believe that President Trump will be a one term president. That being said, if I was a Democrat I would be far from complacent. While there is always a degree of uncertainty with poll numbers, there is likely to be a systematic bias which works against Trump. Poll numbers understated his support before and may well do so again. One of the reasons for this is social desirability bias which is a ubiquitous problem in survey research. Social desirability bias captures the idea that while people care about giving honest answers in surveys, be they political surveys or otherwise, they also care about looking good. Given Trumps rhetoric, some people may be hesitant to admit their support for Trump to someone else. In a similar fashion, social desirability bias is also one possible reason behind the unreliability of polling numbers surrounding the Brexit referendum in the UK particularly when it came to telephone as opposed to online polls.

Social scientists have long recognised this difficultly when relying on what people say they will do in surveys as an accurate barometer of behaviour. As some illustrative examples, people have been shown to understate alcohol consumption, drug use and number of sexual partners as well as misrepresent voting intentions when candidates embroiled in controversy are running. The motivation being that people want to be seen as complying with social norms and expectations in order to create a favourable impression of themselves. This of course is not a factor for the majority of Trump supporters who are proud to vociferously express their support, but there may be a small minority who will publicly hide their intentions and express that they are actually undecided or indeed Biden supporters to pollsters in order to present a positive image of themselves.

Apart from impression management, an equally important but harder to control for social desirability bias is self-deception which reflects an honest but overly favourable self-image. People may honestly feel that they would never support someone with President Trump’s worldview and report that to pollsters, but perceived economic self-interest even if it is mistaken may hold sway come election night.

A second issue with forming judgements based on aggregate vote share captured by Poll numbers is that it does not take account of the advantage given to Republicans by the Electoral College. In 2016, Trump won the presidency with 3 million fewer votes than Hillary Clinton and something similar happened in 2000 with George W Bush. In one study it has been estimated that Republicans should be expected to win two thirds of Presidential Elections even when they narrowly lose the popular vote. What this means in practice is that Trump may only have to come within a few percentage points of Biden to win.

Perhaps the biggest factor Trump has going for him is that a lot can happen between now and the election. According to a cognitive bias known as the peak-end rule, people judge the experience of an event such as Trumps tenure in office not by the sum total of their experiences, rather how they feel at the most extreme (peak) point and how the experience ended. The peak-end rule explains why film endings are so important to us – a good ending can cloud our judgement of what we experienced throughout the film or vice versa. It is also likely the reason behind Trump’s effort to delay the election. It is difficult to see how he could credibly be suspicious of election fraud when it comes to mail-in ballots, rather he realises that any delay in the election will increase his chances of securing another term. Trump may have difficulty understanding the important difference between COVID-19 fatalities as a proportion of cases and simply the proportion of the American population dying from the disease, but he does display a good intuitive understanding of people’s behaviour.

Cases and death tolls are unfortunately still very high in the US and so Trump will find it difficult to present the American public with good experiences that will cloud their judgement of what has gone before. This won’t stop him from trying however. One possibility is if there is a vaccine or treatment that alters the course of the disease before the election, particularly if it is developed by American scientists. Perhaps uniquely for Trump, any treatment may not have to be very effective for it to have an impact on his support. It just has to be perceived as being effective. As evident in the hydroxychloroquine fiasco, despite the potential for harm, President Trump appears to have no qualms about exaggerating the effectiveness of any purported treatment if it serves his own end.

Perhaps most worryingly, there seems to be plenty of individuals and not just those lacking any credibility such as those who believe a day at the beach will be beneficial for COVID-19, but people in positions of power and influence more than willing to back him up. As a case in point, there are plenty of doctors who should and perhaps do know better still more than willing to back up his dubious claims regarding the benefits of hydroxychloroquine. This is despite the availability of multiple randomised clinical trials which are the gold standard when it comes to testing for treatment effectiveness suggesting no medical benefit. Witness this recent exchange between Laura Ingraham, Dr Ramin Oskoui and Dr Stephen Smith on Fox News as an example.

Biden leads in the polls and Trump has demonstrated reckless ineptitude in the way he has handled the coronavirus pandemic. Even with this in mind, right now, it would unwise to write-off the possibility of him winning another four years in the White House.

Posted In: Elections and party politics across the US | Peter Howley 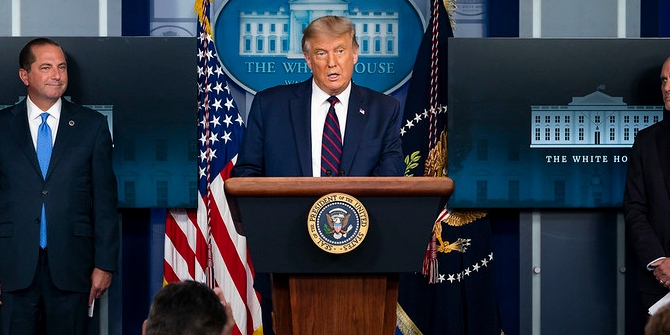