In 2016 one thousand ninety-two civilians were killed by the police in the United States. When civilians die during police encounters they lose not only their right to due process, but also their chance to be counted. Matthew J. Thompson and Chris M. Smith argue that since the fatal police shooting of Michael Brown in August 2014, more is known about fatal police violence than ever before due to an increase not in official government statistics but in citizen crowdsourced data collection.

In his first three months as President, Donald Trump signed executive orders prioritizing officer safety while his Department of Justice proposed ending programs that review the credibility of forensic evidence and investigate patterns of police misconduct and abuse. These positions establish an uncritical, pro law enforcement administration and are considered to be largely symbolic gestures as law enforcement agencies are more directly impacted by local and state budgets and legislation than by federal priority setting. However, what makes the Trump administration’s actions noteworthy is their stark departure from the previous administration’s data driven approach to tackling social problems.

Responding to national concerns over highly publicized deaths of black civilians by police throughout 2014, President Obama launched the White House Police Data Initiative in May 2015. This initiative coordinated 21 police departments from across the country to release existing departmental records and develop standards for transparency, accountability, and effective data analysis. Before this initiative, official national estimates of deaths by police came from the FBI’s Supplementary Homicide Reports, the Bureau of Justice Statistics (BJS) Arrest-Related Deaths Program, and the Centers for Disease Control’s (CDC) National Vital Statistics Program. Independent investigation concluded that these official sources were missing about 50 percent of deaths caused by on-duty police officers.

Undercounting of deaths by police in official data sources arises from different reporting standards by states, issues in classification, voluntary participation by police agencies, and resistance by police departments to making records public. Sociologists and criminologists often incorporate official crime statistics from the BJS, such as the Uniform Crime Reports, into their research, but researchers have largely avoided official data on deaths by police because of the known inherent limitations. At the end of 2015, then Attorney General Loretta Lynch described a BJS pilot program employing multiple computer servers dedicated to scraping news articles and online reports every 24 hours for anything that looked like a fatal encounter between police and civilians. This encouraging program responded to the known limitations of the voluntary FBI and BJS reporting compliance and attempted to incorporate and reproduce big data crowdsourcing initiatives that have taken place in the past three years.

One of the most surprising developments in police violence data collection has been the growth of citizen science and crowdsourced data collection. Early efforts in police violence internet data collection came from the website Fatal Encounters, which attempts to crowdsource and verify reports of all people killed by police officers since January 2000. The British newspaper The Guardian elevated attention to this type of data collection with its database The Counted and similar efforts include The Washington Post with its database Fatal Force. Journalists at these newspapers have crowdsourced data collection to catalog every instance of fatal police violence or fatal police shooting since January 2015. FBI Director James Comey even praised The Guardian’s efforts and admitted that The Counted is a leading national source of information on police violence. Thanks to reporters, for the first time in recent history—as far as we can tell—all civilians killed by police are finally being counted: 1,146 civilians in 2015 and 1,092 civilians in 2016.

Sociologists and criminologists who have been reluctant to use official national data sources on deaths by police are taking these new crowdsourced databases seriously. For example, several new studies using crowdsourced data show that unarmed black civilians are more likely to be shot at and killed by police than unarmed white civilians. However, researchers are still grappling with data limitations: undercounting of civilian deaths by police when local reporters fail to put a news story online, no reporting standards for officer-involved deaths, and missing details of cases such as weapons involved, the level of threat or assault by the civilian, the number of officers at the scene, or even basic demographic information on the civilians and officers. Crowdsourced and journalist generated data, while currently the best national data available, is no substitute for the reach and scope of the BJS or FBI to collect data systematically if given the resources and autonomy. 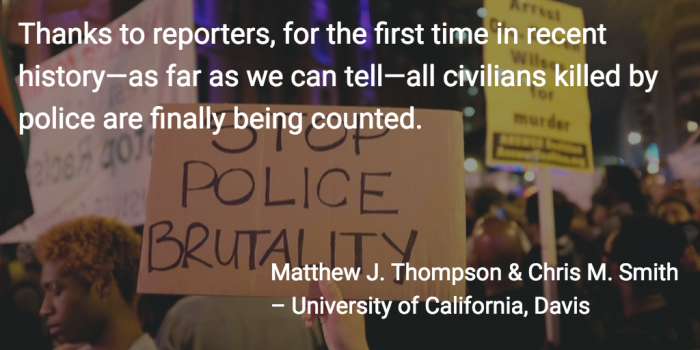 Some researchers have worked directly with local police departments to coordinate records and compile data on deaths by police. Led by Houston, New York City, and St. Louis, city police records are the most complete datasets, as they provide reliable counts of people killed by police as well as comparative instances of nonfatal force. Local law enforcement data also provide details for researchers to examine patterns related to race, crime rates, residential segregation, and more. The Tampa Bay Times recently compiled six years of fatal police shootings records from police agencies across the state of Florida, and its investigation confirmed that black civilians are shot at higher rates than white civilians. Unfortunately, local and state analyses cannot provide strong commentary and evidence of national counts and trends. Collecting comprehensive national data on fatalities by police remains an urgent priority.

The commitment from the Obama administration and members of Congress for improved data collection was encouraging in 2015 and 2016. But, under the Trump administration the fate of these early and incomplete executive and legislative efforts for comprehensive data are now in danger. An executive focus on officer safety does not have to be at odds with ensuring people killed by police get counted. However, federal agencies like the BJS need the independence to advance their improved data collection projects transparently. Without a federal commitment to a coordinated, systematic national database, researchers must continue to rely on an array of state and local efforts, journalists, and a cadre of committed activists holding together a patchwork of databases counting our mounting dead.

“Stop Police Brutality” by ep_jhu is licensed under CC BY-NC 2.0

Chris M. Smith – University of California, Davis
Chris M. Smith is an assistant professor in the Department of Sociology at the University of California, Davis. Chris researches inequality in crime, criminal relationships, and criminal organizations. Chris is currently building a database (PACOTE) on threatening events between police officers and civilians from 2015 that will analyze differences in fatal and nonfatal outcomes.