Much of the media and public debate concerning immigration focuses on illegal border crossers. In this post, Susannah Crockford, who spent two years in Arizona completing ethnographic fieldwork, looks at the motivations behind people who overstay their visas. Unlike the common stereotype of ‘illegal immigrants’, many overstayers come from wealthy, ‘developed’ nations such as Canada and the UK, and contribute to the US economy through work and taxation.

Media reports and political discourse in the US focus on illegal border crossings from Mexico in immigration debates. The term ‘illegal immigrant’ is indelibly associated with people arriving from Central and South America. However, a recent report by the Center for Migration Studies of suggests that 66% of undocumented migrants who arrived in the US in 2014 overstayed their visas. Overstays have exceeded illegal border crossings every year since 2007. The dominant narrative about illegal border crossing is only half the story. Interviews with persons without status collected during my anthropological fieldwork in Northern Arizona (2012-2014) shows a different side of undocumented migration in the US.

Mei was in her early twenties when she overstayed her visa. She described her decision as a “self-fulfilling prophecy”. As a Canadian citizen, she was allowed to enter the US and stay for 6-month periods without a visa. She liked to travel back and forth, working in Canada as a tree trimmer in the summer and then hitchhiking across the US in the winter. However, she kept getting stopped and pulled aside for secondary questioning at the border about her intentions. As a young person with few roots in her home country, such as a permanent job or property, she was suspicious. US immigration law carries the presumption of immigrant intent for non-immigrants attempting to enter. It is up to the person trying to enter to prove they are not intending to stay permanently, usually through pointing to family connections, jobs, and property in their home countries that would give them compelling reason to depart.

Each time Mei was pulled aside at the border, she was aggressively questioned about why she was coming to the US and what she was doing there. She was treated as if she were a criminal. At one point, a Customs and Border Patrol (CBP) agent suggested she was coming to take advantage of American healthcare, a claim Mei found ridiculous since Canada has free healthcare while the US does not. Each time the interrogations got worse. With each return visit, she became more suspicious to the CBP agents. They repeatedly told Mei she was a ‘red flag’. She feared she would be prevented from entering in future.

The first five years of Mei’s life were spent in Japan, then after her parents divorced she moved with her mother to Canada. The family situation was difficult. An only child, she carried her family’s dreams of success as she trained from an early age as a gymnast and trampolinist. At one point an Olympic hopeful, she gave up at the age of fourteen, finding the pressure and intense training too stressful. Later on she dropped out of college, travelling to Cuba, and then to India, where she reunited with her father, a meeting so unsuccessful that she returned to Canada with post-traumatic stress disorder. After travelling back and forth between Canada and the US seasonally for a couple of years, dealing with the stress of crossing the border each time, she reached a point where she felt for certain she would not get let in again. She bought a van and crossed one last time, knowing that this time she would stay. 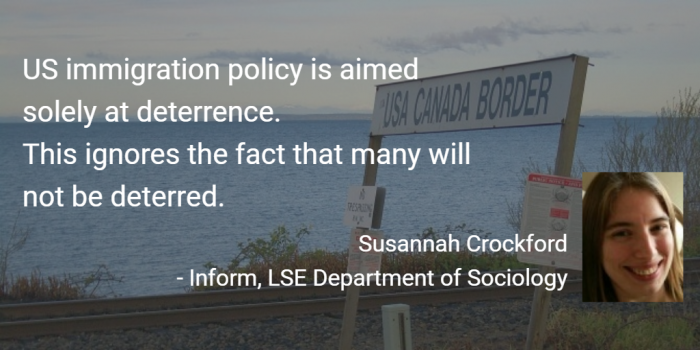 A self-described ‘hobo’, she had been living in Sedona, a small town in Northern Arizona, for three years when I met her. She rented various rooms in different houses throughout the two-year period of my fieldwork, and at one point she lived in her van. For living expenses she worked in a tourist t-shirt store in Sedona, she sold hand-made jewellery at events and online, worked for a gluten-free baker, and had occasional shifts at a hippy clothing store. It was “stupid” to be there, she told me, it was more logical to be in Canada, with the support network of her familiar friends and family, where she would have better job opportunities, free healthcare, and legal status. She commented that if she had been allowed to come back and forth legally every six months she would have been happy with that, but that was apparently only for old rich retired people in her estimation. If she left the country she would have to leave forever, and she did not want to separate from her friends and the town she had grown to love. Arizona was her home now; it was where she felt she was meant to be.

Like Mei, Jack entered the US legally as a tourist, also from a country that participates in the visa waiver program, the UK. This meant he did not have to apply for a visa before travelling to the US. Jack was originally from Edinburgh, he arrived in the US 31 years ago. He overstayed and never legalised his status. He came for three weeks and stayed in San Francisco, then Sacramento, and decided he never wanted to leave. For the last 18 years he lived in Sedona. Making a living as an astrologer, he gave classes, readings, courses, and sold a DVD series of him teaching how to read natal charts. This allowed him to “live between the cracks”, without a social security number, green card, drivers license, car, or welfare benefits. He rented rather than owned his house, on his own with two cats. About ten years ago he remembered there was amnesty for people like him who had been in the US a long time without a criminal record, but the State Department lost his paperwork and nothing came of it. During 2012 he developed a hernia that required an operation, as a person without legal status he was unable to buy health insurance or receive medical assistance beyond emergency care. He saved up $20,000 through work and gifts from friends, and he returned to the UK to get his operation on the National Health Service.

The stories of Mei and Jack suggest that the motivations behind undocumented migration are complex. Both Jack and Mei worked; they did not claim any benefits. However, they did not pay any taxes either. A route to legal status for undocumented migrants could increase tax revenue, allowing them to make a continuing contribution to American society rather than living between the cracks. There is also the chance that the continuing draconian immigration policies of the US government are exacerbating undocumented migration. Mei’s treatment by the CBP led directly to her decision to overstay. US immigration policy is aimed solely at deterrence. This ignores the fact that many will not be deterred.

Recently, I spoke to Mei. I was concerned that the recent increase in immigration sweeps by Immigrations and Customs Enforcement (ICE) would have increased her anxiety. Surprisingly, she told me she felt the best she had in 20 years. Finally, after five years in Sedona she was learning to manage her anxiety. Also, she now feels she has a community around her. She has no anxiety over deportation because she has support from groups formed to protect the undocumented, whereas she used to be on her own. She did a legal training two weeks ago, and has started volunteering as a legal help. She now knew that undocumented migrants have rights, and there are lawyers willing to work pro bono. But, there were raids in Sedona, she told me. This was unheard of in Northern Arizona when I lived there during my fieldwork. An elementary school teacher told her that they occurred in West Sedona, the part of the town with low income housing where many of the local Mexican community reside. Rumours swirled of ICE agents coming in the middle of the night, taking parents of young children, without any sort of warrant. I was surprised that given this circumstance that Mei did not leave. She admitted it was her first instinct is to leave, but she had been able to build lasting supportive relationships in Sedona. It is her home; she is not going to leave.

Susannah Crockford – LSE Department of Sociology
Susannah Crockford is a Research Officer for Inform. She completed her PhD in May 2017 in the Anthropology Department at LSE. She spent almost 2 years living in Northern Arizona, studying religion and political economy. Her fieldwork centred on the small-town of Sedona and the rural area adjacent to the south rim of the Grand Canyon. Previously, she completed degrees at the University of Cambridge and the University of Amsterdam.