Under Donald Trump, US federal drug policy has undergone a fairly dramatic reversal. The Obama administration’s criticisms of the ‘war on drugs’ are gone, replaced by a seeming return to eradication policies in key drug producer countries. John Collins, Executive Director of the US Centre’s International Drug Policy Unit, writes that the Trump administration’s return to unilateral aggressive supply side and law enforcement-based approaches is likely to face significant challenges given the rejection of the ‘war on drugs’ at both home and in Latin America.

In global drug policy, doctrinal change can have major tangible consequences. How a state interprets its policy goals and seeks to implement them can have wide reaching effects. Under the Obama administration, US national drug laws remained more or less stable. However, the implementation of US drug policy domestically and internationally changed perhaps more radically than perhaps any time in the previous century. The Obama Department of Justice deprioritised prosecution of non-violent drug offences, openly criticised the idea of a ‘war on drugs’, painting it, as a war on poor and marginalised communities, and allowed states and local jurisdictions to move ahead with marijuana legalisation in contravention of the Controlled Substances Act.

The Brownfield Doctrine and Backsliding

Further, the State Department, perhaps reacting to pressure from a reformist executive branch, established a new international doctrine based on flexible interpretation of international drug control treaties and non-intervention in peripheral aspects of national drug controls. Under this new ‘Brownfield Doctrine’, named after Ambassador William Brownfield who retired from the US Foreign Service this month, the US overtly eschewed its traditional role as drug war advocate in chief and argued that the international community should be willing to accept that some ‘countries will legalize entire categories of drugs’ while others maintain hard-line approaches.

With the inauguration of President Trump US federal drug policy has undergone a fairly radical reversal. The Department of Justice has reprioritised drug offenses, the administration’s response to the opioid epidemic has been confused, lacklustre and the President has generally resorted to platitudes about discredited supply side fixes and border enforcement. Further his undermining of the Affordable Care Act threatens the greatest tool in the US drug policy toolkit – the expansion of comprehensive evidence-based treatment coverage.

Not all fronts have regressed however. On marijuana Attorney General Jeff Sessions, a staunch drug war hawk, seems thus far to have failed in his effort to roll back federal tolerance of state marijuana legalisation. Although the dynamics are opaque, it seems likely a combination of investor interest, congressional pushback and a fear of tipping pro-legalisation swing states away from Republican candidates. Meanwhile, it seems the likely outcome of a reinvigorated federal war on marijuana would only be an acceleration of the drive towards the removal of federal prohibitions.

Internationally however, it remained to be seen how the new administration would make its presence felt. Observers have quietly noted a multi-frontal push towards traditional eradication policies in key producer countries. This and an increased linking of drugs with insurgency and other defence imperatives point to a reinvigoration of the State Department’s traditionally hawkish Bureau of International Narcotics and Law Enforcement (INL).

The recent testimony by INL head, Ambassador William Brownfield, suggested the opening barrage. He was soon followed with a politically taut, on-message statement by President Trump. Simultaneously the post-drug war policies of President Santos remain under sustained attack within Colombia, particularly from former President Uribe’s right wing Centro Democratico party. They have rubbished the development-orientation of the supply reduction policies in the peace accord and pushed for a rapid return to aerial fumigation in line with recent US demands. The latter has been halted by President Santos following wide criticism of their ineffectiveness, and evidence that the chemical used, glyphosate, was causing cancer in affected communities.

Whatever the institutional drivers, the condemnation of Colombian drug control efforts by President Trump represent a radical doctrinal shift for a number of reasons. First, it represents a return to unstrategic blanket supply side policies which were rubbished by the Obama administration. After decades of escalating interdiction efforts, drug availability continued to rise and prices continued to fall leading many to conclude that the ‘war on drugs’ was not only ineffective, but actively damaging.  As President Santos described it, it was akin to ‘cycling a stationary bike’.

The Trump administration seems set to discard these lessons in favour of a return to aggressive supply side and law enforcement-based approaches. Second, the rumblings within his administration have gone further than drug control imperatives to reject the broad underpinnings of the peace agreement – namely the participation of the FARC in reconstruction and local control efforts. Third, it represents an unvarnished return to traditional US ‘narcodiplomacy’ which many in the region view as a form of policy imperialism. 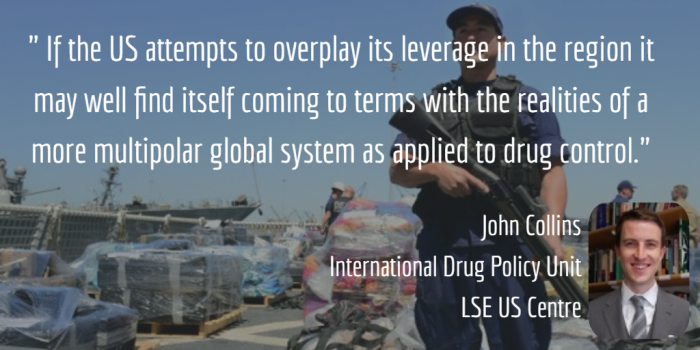 This brand of unilateralism appeared to have been banished under the Obama administration. Indeed, much of the radical shift in global drug discourses over the past decade were at least in part facilitated by broader US regional diplomacy. This sought to roll back on the perceived unilateralism of the George W. Bush administration and thereby foster a sense of collective engagement, underpinned by a new institutionalism. Under this framework bodies such as the Organization of American States (OAS) reinvigorated themselves, often adopting the drug issue as a sort of regional policy unifier.

Further, member states utilised the US ‘openness’ to dialogue by, for the first time ever, roundly castigating the failures of the ‘war on drugs’. Then Vice-President Joe Biden was the first senior US official to visit the region and describe it as a ‘totally legitimate’ debate’ in 2012. Thereafter events in the US accelerated with the legalisation of marijuana in Washington State and Colorado, thereby drastically curtailing US drug war ‘moral authority’. Soon leaders in the region questioned why they should expend resources repressing the economic choices of their farmers, when citizens in the US were seeking to profit from marijuana. The inauguration of the ‘Brownfield Doctrine’ fundamentally represented an acknowledgement of that new political reality.

However, recent rebuttals of the Colombian peace deal and its constituent drug control components represent the beginning of a new hemispheric drug control doctrinal framework as well as a repudiation of much of the peace process which had thus far received relatively warm US support. Further, it represents a return to drug war rhetoric and policies which many thought had been confined to the dustbin of history.

Ultimately Trump’s threat to decertify Colombia tells us more about broader policy directions under the new administration than it does about coca in Colombia. First, the Obama era of reformist drug policy discourses from the highest levels of the US government is clearly at an end. Second, more hawkish drug warriors, marginalised under the Obama administration and subjected to policy formulation that appeared driven by an anti-drug war Department of Justice, have remerged and found a trump White House and Department of Justice more open to their retrograde policies. Third, US policy is often rarely about drugs, but often a function of broader domestic or foreign policy goals. Seeking a more muscular foreign policy as well as fuelling domestic fears and then simultaneously generating perceptions that he is fighting drug gangs, Trump is willing to overlook policy lessons of the past. All of these points are well highlighted by the Trump administration’s attitude towards perhaps the US’ closest regional ally.

With Trump’s statement we are witnessing a return to the rhetoric of the drug war. However, the ability of the US to mandate this vision at home and abroad is drastically curtailed relative to other periods of escalation, such as the 1980s and early 1990s. There is an absolute rejection of the ‘war on drugs’ across the political spectrum in the US, but this is most viscerally observed by the left and Libertarians. Meanwhile, governments in Latin America began to openly reject the strategy almost a decade ago and seem unlikely to accept US dictates that they return to policies they view as having uniformly failed. If the US attempts to overplay its leverage in the region it may well find itself coming to terms with the realities of a more multipolar global system as applied to drug control. Arguing a right of interference in these countries drug control efforts given its role as a consumer country may no longer produce the desired result.

Just like the international ‘system’ of drug control, the US will find itself confronting a region with a desire to find new alternatives beyond simplistic prohibitions. Further, just like Jeff Sessions on marijuana, any attempt by the US to overplay its hand and prevent this may simply expedite the declining influence of US narcodiplomacy in the region.