In a move that has surprised US partners and allies, this week President Trump ordered the withdrawal of US troops based in Syria, citing victory over ISIS. Jasmine Gani writes that while members of the Trump administration have, until now, offered reassurances that the US would remain in Syria, President Trump has been making comments to the contrary since as far back as his 2016 election campaign. She argues that this disconnect illustrates just how easily Trump can override the counsel of his closest advisers to make foreign policy on his own.

The announcement this week that the US would be withdrawing all of its troops from Syria came as a shock not just to analysts, but to its allies and many of Trump’s supporters within the Republican Party as well.

The group most immediately affected by this decision – the Kurdish People’s Protection Units (YPG) and the Kurdish-dominated Syrian Democratic Forces both backed by the US and operating in the country’s Northeast region – were not consulted prior to the announcement yesterday. France, who have been engaged with the US and the UK in the campaign against ISIS, confirmed in a statement that they had not received prior notice; in an official statement, Israel claimed to have been given prior notice and assurances that the US would continue to defend their mutual interests in Syria. But current and former politicians in Israel have been scathing in their criticism of the US ‘surrendering’ to its enemies. Some within Trump’s own party, such as Lindsey Graham and Marco Rubio, were vocal in their dismay at this sudden decision, arguing that this was handing a victory to the Russians, Iranians and to ISIS. Meanwhile it was clear that Jim Jeffrey, the US special representative to Syria, could not have known what was due to be announced by his administration when he gave his keynote speech at the Atlantic Council just a couple of days before, laying out an alternative and, as it turns out, redundant US strategy in Syria.

On one hand observers and allies are right to be surprised by Trump’s decision. Over the course of this year, various members of the administration have all asserted there would be a long-term presence of US troops in Syria, albeit citing different reasons. The outgoing ambassador to the UN, Nikki Haley had to clarify that US troops would not be leaving in the short-term in a statement in April 2018, after Kurdish groups wary of US commitment began talks with Damascus. National Security Adviser John Bolton repeated the same claim in September, but in an apparent shift in US strategy (and one that analysts were keen to run with over the next few months) he stressed the importance of countering the presence of Iran rather than ISIS. This was supported by statements made by Jim Jeffrey, and to some extent by Secretary of Defence Jim Mattis, who sought to downplay the role of Iran but nevertheless agreed the US would remain in Syria to prevent the return of ISIS. As recently as 11 December, Brett McGurk, the Special Presidential Envoy for the Global Coalition to Defeat ISIS, stated in a press briefing: “And if we’ve learned one thing over the years, enduring defeat of a group like this means you can’t just defeat their physical space and then leave”. On one occasion, Trump himself appeared to confirm this longterm policy, stating in October with regards to supporting the Kurds that “We [the US] have to help them. We want to help them.” 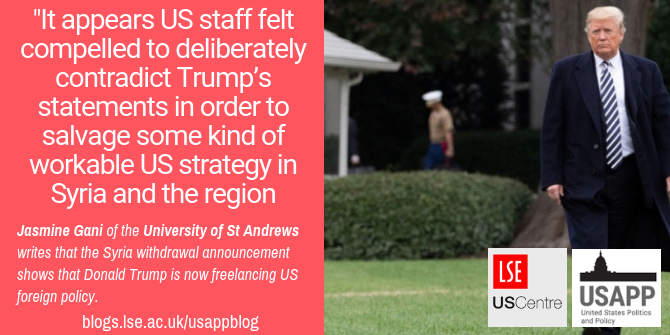 However, despite this attempt by his advisers and policy staff at devising a more consistent Syria policy and a more assured public relations front, the US President himself has more often than not repeated his intention to withdraw troops from Syria, first during his election campaign and once again in April 2018 after US airstrikes in Homs. His decision in June 2017 to terminate a $1 billion CIA program to help the rebels, and his suspension this year of a $200m stabilization fund for humanitarian needs, further showed his disinterest in shaping developments on the ground. In a recent interview with the Washington Post he again repeated the need to withdraw from the Middle East, citing Israel as the only reason why the US would stay.

This highlights the extent to which analysts have paid insufficient attention to repeated signals from the President regarding a likely policy outcome, while giving more weight to statements coming from other departments. Given the unreliability and lack of strategic depth of Trump’s pronouncements, this tendency is understandable; but it contributes to the sense of unpredictability in US foreign policy, when in fact Trump has often signalled controversial policies in earlier, seemingly ad-hoc, statements.

Moreover, what this episode exposes, even more clearly than before, is the dissonance between the President and his senior civilian and military advisers. This level of contradiction cannot simply be put down to policy confusion and poor communication, though both are at play; it appears US staff felt compelled to deliberately contradict Trump’s statements in order to salvage some kind of workable US strategy in Syria and the region. Rex Tillerson’s recent comments on his experience as Secretary of State, in which his role was dominated by the need to correct Trump’s disregard and ignorance of the law, demonstrated the extent to which the President is a liability and an obstruction to coherent policy-making. It is unprecedented for the White House to be in this position in which no senior advisers share its strategic thinking, a position of its own making. The biggest problem for the US, as well as all those who are affected by US policies, is not that senior advisers are dissenting with the president; the greatest cause for concern should be that the president can so easily override every expert counsel he receives – from his security, military, diplomatic and intelligence advisers, as well as his allies abroad – with so little heed to the consequences. Those consequences are not only going to hurt Americans at home, or its allies abroad, but will also have a direct bearing on civilians in those conflicts entangled with the US.