Republican voters will go to the polls on September 26th to select the state’s US Senator to replace Jeff Sessions, who President Trump elevated to the position of US Attorney General. Andrée E. Reeves gives an overview of the runoff race, which pits former state Supreme Court Justice Roy Moore against former Attorney General (and now incumbent US Senator) Luther Strange. She writes that while President Trump has placed his thumb on the scales for Strange, Moore’s supporters are more passionate and he is seen by many as the anti-establishment candidate.

Thanks to a traditionalistic political culture and modern-day culture wars, public humiliation and scandal have plagued all three branches of Alabama government in the last year. In July 2016, former House Speaker Mike Hubbard was convicted and sentenced to four years in prison for felony ethics violations for soliciting money or business from individuals and companies. In September 2016, for the second time, Alabama Supreme Court Chief Justice Roy Moore was removed from office for the rest of his term for ordering probate judges to enforce a statewide ban on same-sex marriages, defying a US Supreme Court ruling. The first time, in 2006, he had refused to remove a 2.6 ton granite monument of the Ten Commandments (that he copyrighted) from the judicial building, in violation of a US Supreme Court order. Then Governor Robert Bentley resigned in April 2017, admitting to violations of campaign and ethics laws. And it just gets worse.

On November 18, 2016, President Donald Trump nominated Alabama’s US Senator Jeff Sessions to be Attorney General. The Senate seat has been controversial for years. Sessions had been a US Attorney and then Attorney General of Alabama. President Ronald Reagan had nominated him for a US District Court Judgeship in 1986, although when doubts surfaced about his civil rights record, the nomination was withdrawn because it stalled in the Senate Judiciary Committee. In 1996 Sessions ran for the US Senate seat vacated by retiring Democrat Howell Heflin, handily defeating Democratic Roger Bedford. Sessions served until President Trump nominated him to be Attorney General. Though the same civil rights concerns were resurrected, the Republican controlled Senate confirmed him 52-47 in February 2017, whereupon Sessions had to resign his Senate seat.

When there is a vacancy in a Senate seat, the default option is for that state’s governor to call a special election. She did, and Alabama held a special primary election on August 15, 2017 to fill Sessions’ vacancy. The purpose of a primary is for each party to choose its candidate who will face the other party’s candidates for public office in the general election. Most states require a simple plurality vote, but, in a practice stemming from Jim Crow days and found only in southern states, Alabama holds runoff primaries when no candidate receives a majority of votes for nomination.  No candidate won a majority in the Republican primary, so the state will hold a runoff election on September 26, 2017 to decide the GOP’s nominee. This race is bellwether of the tack of the Republican party. On December 12, voters will choose either the Republican or the Democrat in the general election, another harbinger of the direction the country is going.

In the Democratic Primary, former US Attorney Doug Jones won his nomination outright over seven opponents. Jones is a standard bearer in his party, with good, establishment Democratic credentials, although in his acceptance speech he pledged to be an independent voice. Much of his appeal stems from his successful prosecution of two Ku Klux Klansmen, 38 years after the fact, for the 1963 murder of four Black children in the bombing of the 16th Street Baptist Church in Birmingham, Alabama. Given recent Republican dominance of statewide offices and much higher turnout amongst Republican primary voters, many people see Democrats as having little chance in December. 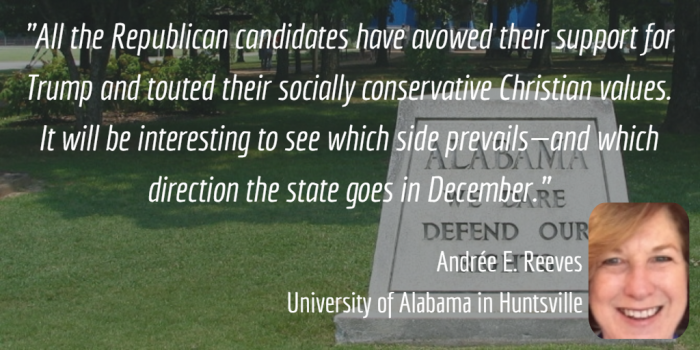 “Alabama dares” by Brent Moore is licensed under CC BY NC 2.0

How we got to where we are now

All the excitement in the 2017 special election primary is on the Republican side and thus needs more explanation. Alabama authorizes its governor to fill vacancies in its US Senate seats by appointment “until his successor is elected and qualified.”

Several prominent Republicans expressed interest in being appointed to the seat. Governor Bentley interviewed 11 people for the job and chose one.

At the time, Bentley was under scrutiny for an affair with a staff member. His 50-year marriage collapsed after his wife used her mobile phone to record “cringe worthy” calls, later made public, that he had made to his mistress. Six foot nine inch tall state Attorney General “Big Luther” Strange was investigating Governor Bentley for allegedly using state resources to cover up the extramarital affair. Starting in spring 2016, the state House of Representatives also considered articles of impeachment of the Governor for “willful neglect of duty,” “corruption in office,” “incompetency” and “offenses of moral turpitude.” The legislature suspended its inquiry in November—at the request of the Attorney General. In February 2017, Governor Bentley chose that same Attorney General, Luther Strange, to fill the US Senate seat vacated by Jeff Sessions.

Bentley then resigned in April 2017, as part of a plea deal on two campaign and ethics charges, both misdemeanors. He was rewarded with a 30-day suspended sentence, 100 hours of public service as a physician (he is a dermatologist), and an order to repay nearly $37,000 in campaign funds. Lieutenant Governor (and former State Treasurer) Kay Ivey was sworn into office the same day.

Twelve Republicans filed to run in the primary. Several are known politicians, but others had mostly local name recognition—and thus no chance. The “Big Three”—Luther Strange, Roy Moore, and District 5 congressional Representative Mo Brooks—competed in the primary. Moore won 60 of 67 counties and 40 percent of the vote. Sitting Senator Strange, backed by President Trump and Senate Majority Leader McConnell, garnered 32 percent. A member of the ultra-conservative House Freedom Caucus, Brooks ran third with 20 percent.

Moore, the twice toppled state chief justice, sometimes called the Ayatollah of Alabama, and arguably the anti-establishment candidate, and Strange, the investigator of his patron’s campaign misdeeds and the darling of the establishment, will face off in the primary runoff.

Moore has significantly less money at his disposal, but ostensibly he needs it less because his supporters are more passionate and therefore more liable to turn out. Evangelicals strongly back Moore, including some big names, including Focus on the Family founder James Dobson, former Alaska governor (and 2008 Vice-Presidential candidate) Sarah Palin, and Fox News host/former Arkansas governor/evangelical pastor Mike Huckabee. Early in the contest, Hollywood tough man Chuck Norris endorsed him. Recently, real life ‘tough men’ Steve Bannon and Sean Hannity threw their weight behind Moore. After losing his own primary battle, Rep. Brooks asked his followers to support Moore. Several other state officials have endorsed Moore.

The Strange team has picked up notable support of its own, including President Trump and Vice President Pence, who are traveling to Alabama to help. Trump’s support for Strange is intriguing, especially since Moore’s evangelical followers voted for Trump in huge proportions. Trump may be rewarding Strange for his loyalty, including support on repealing the Affordable Care Act and confirming Justice Neil Gorsuch. Others argue that Moore does not support Trump’s border wall. Mitch McConnell, senior Alabama Senator Richard Shelby, and the President of the National Christian Foundation of Alabama all support “Big Luther.”

Strange has large sums of money available with which to run attack ads against Moore, thanks to generous corporate support and pledges from McConnell and the Senate Leadership Fund. The National Rifle Association, the National Right to Life Committee, The National Chamber of Commerce, and the Alabama Farmers Federation are among the big interests supporting Strange. The US Chamber of Commerce also backs Strange, whose support tends to be more corporate than Moore’s—and more national.

Tainted as it is, the Alabama Senate primary runoff is indicative of a national struggle over the direction and control of the Republican Party. All the Republican candidates have avowed their support for Trump and touted their socially conservative Christian values. It will be interesting to see which side prevails—and which direction the state goes in December.