Voters in the Yellowhammer State go to the polls tomorrow in a Special Election for one of the state’s US Senate seats. Andrée Reeves gives an overview of the state of the race, and argues that despite the controversies surrounding the Republican candidate, Judge Roy Moore, the Democratic candidate, Doug Jones, is a long shot to win in deeply conservative Alabama.

Even beyond the state’s traditional college football rivalry, Alabama is deeply divided, politically and culturally. In the midst of nationwide scandals over sexual harassment or misconduct by media elites, CEOs, and politicians, Alabama’s Senate race has taken center stage. The national focus on these issues has cast even more light on allegations against one of the state’s candidates. This race has been called a “referendum on the state’s identity.”

The Washington Post’s Robert Costa says the credible allegations against Republican candidate Roy Moore have been getting many Republican voters to “question their own partisan affiliations.” On the flip side of the coin, Republicans are counting on Trump supporters to turn out in droves to support Moore.

The months-long angst over the Alabama special election for a vacant US Senate seat will soon be over. We should know the outcome after the polls close at 7:00 pm on Tuesday, December 12.

As AL.com columnist John Archibald wrote, pretty much the only thing the state’s Republicans and Democrats agree on is that Alabama will be better off when this election is over: “this circus that has made Alabama the center of the tilting political universe, the focus of the world and the butt of all its jokes….”

In a state that was almost entirely Democratic until after President Lyndon B. Johnson signed the Civil Rights Act in 1964, the last time a Democrat won a Senate seat in Alabama was Richard Shelby in 1992. Then the day after the Republicans won control of Congress in the 1994 elections, he switched parties. Also formerly a Democrat, current candidate Roy Moore, by the way, switched to the Republican party in 1992.

Recent polls have flip-flopped between Democrat Doug Jones and Moore since the September 26 Republican primary runoff, and they remain close, albeit some have Moore with a slight edge.

Culture wars are being played out in this election. The 2017 special election features the Alabama equivalent of Donald Trump. “Bombastic and defiant, underfunded, prone to controversial statements (including about Vladimir Putin), and railing against Washington elites, Moore, ironically, may have captured some of the narrative that propelled Trump into the White House.” Supported by the Alt-right, Donald Trump, Steve Bannon, and his Breitbart website, accused pedophile, twice toppled former Alabama Chief Justice Roy Moore, 70, is the Republican man to beat.

The accusations of an adult man pursuing teenage girls have increased support among some of Moore’s strongest backers. Many Republicans simply don’t believe the allegations from three decades ago, preferring to attribute them to liberal Democratic conspiracies. Democrats—and many Republicans—believe the women making the allegations.

Doug Jones, 63, former US Attorney and prosecutor who won convictions of two murderous Ku Klux Klan members, among others, will contest the seat for the Democrats. Because of the outrageous comments and the numerous controversies surrounding Moore, Jones often has been neglected in the national and international media coverage. Moore has earned household name status—or notoriety, while Jones has not. He is just not as well known. “Jones, a career prosecutor who grew up in the highly segregated Deep South, has dedicated his life to fighting racial hatred.” The race has been deemed “a kind of Rorschach Test on loyalty to party politics and women’s rights, overshadowing nearly all talk about policy or Jones’ qualifications.”

Moore has twice run—and won—statewide campaigns for Chief Justice. He outpolled his Democratic opponent, Judge Sharon Yates, by over 9 percent in 2000. His margin in the 2012 election was 3.5 percent, at the same time that Republican presidential nominee Mitt Romney carried the state by more than 20 percent. 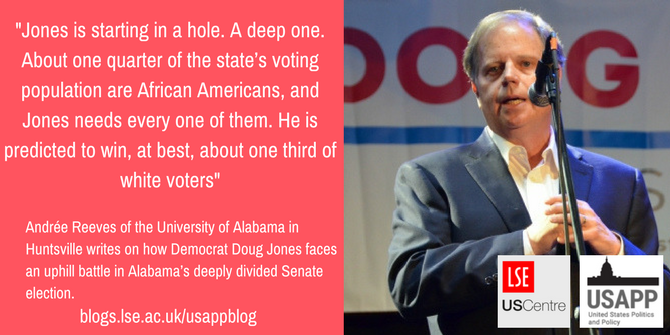 “Doug Jones at Saturn” by Open minded in Alabama is licensed under CC BY NC 2.0

Republicans are deeply conflicted about Moore, who is really the anti-Establishment candidate. The Republican National Committee, which once had cut off Moore’s support, has resumed its funding following the allegations of sexual misconduct, although the National Republican Senatorial Committee has not—and will not. The Senate Leadership Fund, controlled by Senate Majority Leader Mitch McConnell, agreed with NRSC. The establishment Senate Republican leadership has promised an ethics investigation if Moore wins. Former GOP presidential nominee Mitt Romney tweeted, “Roy Moore in the US Senate would be a stain on the GOP and on the nation.”

The Alabama Republican Party, on the other hand, has remained steadfast in its support of Moore. Senator Shelby has not, sending “a clear message to his home state on Sunday when he said on national television that the party could ‘do better’ than elect Roy S. Moore to the state’s other Senate seat in two days.”

Moore has willingly contributed to his own controversial reputation. He “appeared on a conspiracy-driven radio show twice in 2011, where he told the hosts in an interview that getting rid of constitutional amendments after the Tenth Amendment would ‘eliminate many problems’ in the way the US government is structured.” He included the 17th Amendment, which mandates the direct election of senators rather than their appointment by state legislatures. This list also includes the 14th Amendment, which has been the mechanism the courts have used to apply the protections of the Bill of Rights (the first 10 Amendments of the US Constitution) to the states. The 14th Amendment also includes a prohibition of states denying equal protection of the laws.

Recent attention has focused on remarks Moore made in September in a campaign rally in Florence, Alabama, and since resurrected via social media. Few paid much attention at the time. One of the few African Americans present asked Moore when he thought American had been “great.” Moore responded, “I think it was great at a time when families were united—even though we had slavery—they cared for one another….Our families were strong, our country had a direction.” At the same rally, Moore said “reds and yellows fighting,” using derogatory terms for Native Americans and Asians.

In addition to relentless fundraising efforts via telephone and email, both sides have flooded the airways with negative political ads in the last hours before the election.

Moore’s campaign has TV spots shaming Jones for his pro-choice stance on abortion—possibly being the biggest issue, other than party identification. The ad then pictures Jones surrounded by former Democratic presidential nominee Hillary Clinton, Rep. Nancy Pelosi (D-CA), and Sen. Chuck Schumer (D-NY), who have been incessantly vilified by Alabama Republicans and conservative media outlets.  Republican strategists said months ago that they were going to hang Hillary Clinton and Nancy Pelosi around Jones’s neck.

Another ad from the Moore camp calls Jones a “liberal…who is terrible on crime, bad on borders, bad with the military, bed for the Second Amendment.” Trump has reinforced these claims in Tweets.

Some of Moore’s other controversial statements have been demonstrated by the Jones campaign’s revival of a 2007 opinion piece by Moore in which he likens government-funded pre-school, favored by many Democrats, to totalitarian indoctrination, as the Nazis and Stalin practiced. “Any attempt to extend government-controlled education to pre-kindergarten children is another unjustifiable attempt to indoctrinate our youth.”

The Jones campaign, attacking Moore for disturbing conduct, also has run ads where Jones asserts that “men who hurt little girls should go to jail and not the United States Senate.” In addition to highlighting allegations against Moore, that comment referenced Jones’s role in convicting two Ku Klux Klan members for the 1963 church bombing that killed 4 young girls.

Another recent Jones ad brings up the fact that Roy Moore co-authored a legal course instructing students that women should not be allowed to run for office. Moore’s course taught that the Bible forbid women to run from holding elected office and Christians shouldn’t vote for women.”

One controversial piece of Jones’s campaign material is a printed mailer highlighting the allegations that Moore, as an adult in his thirties, pursued teenage girls. The ad also tugs at the uncomfortable race issues still alive in the state. It “depicted an African-American man on the front with his eyebrow raised and the question: ‘Think if a black man went after high school girls anyone would try to make him a senator?’”

Liberal SuperPac American Bridge is running a 15-second digital ad on Facebook targeting Republican voters in the state, explaining how they can avoid voting for both Moore and Jones by using the write-in option to choose Nick Saban, the successful and popular coach of the Crimson Tide, the University of Alabama’s winning football team.

Whereas Jones has been appearing all over the state, Moore himself has almost disappeared in recent days, while his campaign disputes allegations of sexual misbehavior. Observers say that he is not in the spotlight because he does not have to be. He is going to win anyway.

Democrats, on the other hand, need an extraordinary turnout. In special elections, however, turnout is notoriously low. The pro-Jones forces are focusing primarily on African Americans and millennials in an unprecedented get-out-the-vote effort. 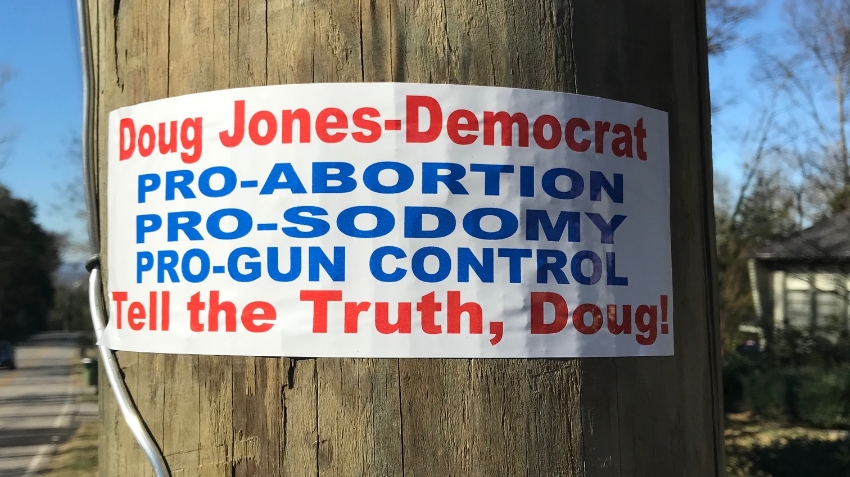 Jones is starting in a hole. A deep one. About one quarter of the state’s voting population are African Americans, and Jones needs every one of them. He is predicted to win, at best, about one third of white voters. Evangelicals comprise nearly half of the state’s voters, and Moore is expected to win most of them, especially given Donald Trump’s overwhelming support in the state. Jones is wooing everyone else, particularly African Americans and Millennials.