The destruction wrought by 2017’s hurricane season has exposed that the southern US is still very vulnerable to such natural hazards. In new research, Alejandro Quiroz Flores examines disaster preparedness across many countries, including the US. He finds that while even autocracies are able to protect their populations, the US still has a poor record on preparedness.

Hurricanes are often disastrous for countries and communities, but they can lead to better disaster protection and preparedness. In the context of storms and other ocean-originated hazards, my research shows that democracies protect their coasts much better than non-democracies. In fact, I show that ocean hazards are so dangerous than even autocrats provide protection when national capitals are close to the coast.

In this light, the recent devastation caused by Hurricanes Harvey in Texas and Irma in Florida present an infuriating puzzle. The US is (very) wealthy, largely democratic, and with a history of destructive natural disasters. Yet coastal communities continue to be destroyed by seasonal storms. Has the US not learnt from past disasters? Have the wrong lessons been applied by local and federal governments?

One thing is certainly true: coasts in the US —and around the world— are overpopulated and from this perspective, Houston, Florida, and Puerto Rico were disasters waiting to happen. In its most recent report, the US National Oceanic and Atmospheric Administration (NOAA) indicated that 39 per cent of the US population – or over 123 million people – lived in coastal shoreline counties, and that an additional 10 million will be living in costal zones by 2020.

Zooming in to Texas and Florida, the vulnerability picture is more dramatic. Both states have a large population living in coastal zones. In fact, Florida is the archetype of the low elevation coastal zone that will be submerged by sea level rise. This means that 14 million people in Florida are likely to be severely affected by seasonal floods and storms in the near future. The equivalent population in Texas is not that large. Yet, Texas has Houston, the 4th largest city in the US with an estimated 2.24 million people. It is also poorer than Florida: 18 per cent of the Texas population lives in poverty, while the national average —the same as Florida— is 13 per cent.

Texas, Louisiana, Florida, and other states in the Gulf of Mexico are quite vulnerable to ocean-originated hazards. Is disaster protection across US states proportional to vulnerability? Although vulnerability is crucial, I expect to see large-scale protection of the entire US coastline simply because the country is wealthy, democratic, and with a history of disasters. Naturally, states with long coastlines should be better protected than states with short ones. However, of two states with similar coastlines, I expect that the more “politically relevant” one will be better protected. There is a large literature on electoral politics and disasters in the US.

“Preparing for Gustav” by The U.S. Army is licensed under CC BY 2.0

Governments implement a large array of protection policies to reduce the vulnerability of coastal communities. The type of protection depends on specific hazards. My own research focuses on the deployment of sea-level stations, which can help determine in real-time whether and to what extent sea level along shores has been altered by events such as hurricanes or tsunamis. Of course, sea-level stations are not the only way of monitoring sea level changes but they represent a lower bound for protection against natural hazards and provide a telling sign of how important coastal communities are in a country.

In my cross-national research, I used data on the number of stations from the Sea Level Station Monitoring Facility, which is coordinated by UNESCO. Here I look at the number of stations used to calculate sea level trends from NOAA’s National Water Level Observation Network. The network operates approximately 210 stations across the US and its territories. Figure 1 presents the number of stations by state in the Continental US and Hawaii for September 28, 2017 and the natural logarithm of the length of a state coast in miles. 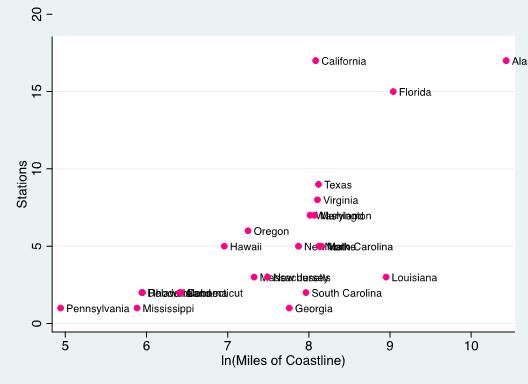 As I expected, Figure 1 suggests that the number of stations increases with the length of a coastline. However, a closer look at the numbers is interesting. For instance, Texas and California have similar coastlines of 3,359 and 3,247 miles respectively. Yet, Texas only has 9 stations while California has 17. Louisiana and Florida also have similar coastlines of 7,721 and 8,436 respectively, but the former only has 3 stations while the latter has 15. Of course, California and Florida have larger populations than Texas and Louisiana but this is precisely what I was expecting—important states, at least reflected by population size, enjoy more protection.

Of course, population is not a perfect indicator of political relevance. If it were, the current situation in Puerto Rico would be completely different. Instead, this island of 2.5 million people and a coastline of 700 miles has only 2 stations. It is therefore not a surprise that the island was ravaged by Hurricane Maria and has received comparatively little attention from the US federal government.

Altogether, people who live in coastal zones, governments at the state and federal levels, as well as the insurance industry, need to reconsider their approach to coastal living and ocean-originated hazards. And they need to do it sooner rather than later—Texas only implemented a state-wide building code in 2001 while Florida implemented it in 2002 in the aftermath of hurricane Andrew. This type of complacency will only cost lives as coastal hazards increase in magnitude and frequency in the near future.