Rail transport is expensive for cities to build and maintain, but many cities have gotten around this by building light rail systems in recent decades. In new research, Kevin Credit examines how businesses are affected by new light rail transit systems. He finds that areas within one mile of stations have nearly 30 percent more retail businesses, 40 percent more services, and almost 90 percent more knowledge firms per block compared to areas farther away which are more reliant on cars. There is, however, a novelty factor – these benefits slowly decline after a new transit system opens.

Over the past thirty years, US cities have spent billions of tax dollars on new rail transit systems. While these light rail and streetcar systems are generally less expensive than the subway systems of the early 20th-century, it is not always clear whether they have been worth the massive public investment that they have garnered. This is especially important to understand, given the fact that many of these new systems have been built in “Sunbelt” cities like Phoenix, Denver, and Dallas that are not as dense as historically transit-oriented cities like New York and Boston. My new research finds that these new light rail systems can be very beneficial for local businesses – if they are near to transit stations.

Researchers have started to identify transit’s benefits for increasing physical activity, reducing traffic congestion, and helping socially-disadvantaged populations become more mobile, but they have spent relatively less time looking at the economic impacts of these systems. Since transit systems concentrate people at particular locations – the stations where everyone boards and exits the train at the same time – we would generally expect the areas around stations to become economically valuable for businesses trying to capitalize on this larger visibility. Even businesses that don’t rely on walk-in customers, like offices, might also benefit from being close to transit stations due to shorter commute times for their employees or the ability of coworkers to socialize over happy hour without having to worry about driving home. Of course, it is not immediately clear whether this logic would hold in a sprawling suburban region like Phoenix.

In fact, business data from 1990-2014 show a statistically-significant increase in the number of retail stores, service businesses (like barbershops and dry cleaners), and offices in the knowledge sector (like architecture firms or lawyers) near stations after Phoenix’s light rail system opened in 2008.

I study this using a “quasi-experimental” method that simulates the conditions of a scientific experiment in the complex real world of urban interactions: business growth is tracked in “control” areas that are not influenced by the construction of the light rail – in Phoenix, typical auto-oriented suburban neighborhoods near highway interchanges – compared to “treatment” areas within one mile of station locations. This unique method provides more confidence that the construction of the light rail actually contributes to the increase in business activity, rather than the other way around. It also allows me to control for a variety of factors that influence both areas over the time period of the study, such as the economic downturn in 2008.

The analysis shows that areas within one mile of stations have 28 percent more new retail businesses, 40 percent more services, and 88 percent more knowledge firms per block than those in the auto-oriented areas further away. And, as the map below shows, these economic benefits are even larger the closer a business is to the station. For business owners, this crystallizes the importance of being located as close to transit stations as possible in order to capture its full economic benefits. 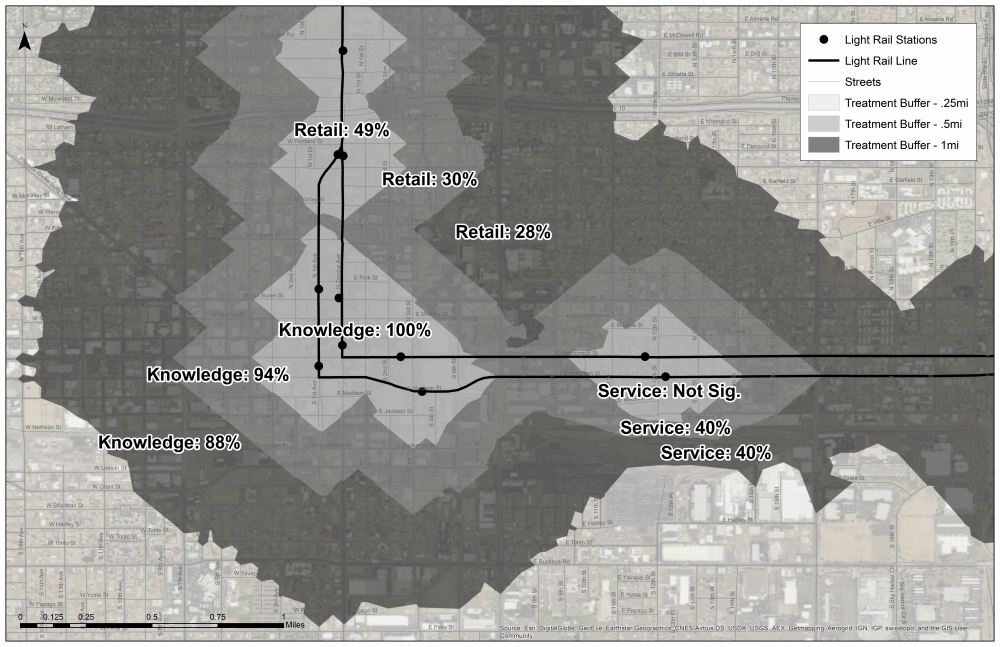 At the same time, the benefit felt by areas around stations in Phoenix tends to decrease after the system opens, at the rate of about 7 percent per year for all three types of businesses, on average. This fact – referred to by researchers as the “novelty factor” – lends support to the idea that transit systems are most valuable when they are brand new, and tend to become less appreciated as the novelty of the new mode wears off and users return to their previous transportation habits.

So, while my work shows that light rail is good for new business activity nearby, urban planners and policy makers in cities like Phoenix also need to develop strategies for ensuring that transit use becomes more than a novelty. Maintaining good service and expanding the system to reach new neighborhoods are both important strategies to foster system viability.

At the same time, additional research on the long-run economic and social impacts of transit development – including whether or not it tends to increase gentrification in nearby neighborhoods – is needed, so that cities can better understand the full range of costs and benefits from transit system construction. Still, for those concerned with the environmental and social costs of the continuing pattern of migration to suburban, auto-oriented cities in the United States, it is encouraging to see some evidence that public transit offers sustainable economic benefits to new business activity as well.

Kevin Credit – Michigan State University
Kevin Credit is a fourth-year Ph.D. candidate in Geography, Environment, and Spatial Sciences at Michigan State University. Broadly, his research is interested in the relationship between urban planning interventions and sustainable economic development outcomes, with a primary focus on the impact of active transportation systems on new business activity. Kevin’s recent work has explored a range of topics in this area, including the impact of public transit construction on adjacent entrepreneurship, the relationship between built environment features and the sales performance of individual businesses, and inner city economic development. This work has appeared in scholarly journals such as Urban Studies, Environment and Planning – B, and Urban Affairs Review.