Each day, much of the political world wakes up and asks “What has Donald Trump tweeted now?” While Trump’s use of Twitter defines his presidency, it was also integral to his 2016 election campaign. Cora Lacatus analysed more than 47,000 tweets and over 500 press releases from Donald Trump, Hillary Clinton and Bernie Sanders from the 2016 election campaign. She finds that Clinton was largely concerned with issues of equality, Sanders was an anti-establishment figure, and that Trump limited his own press releases, curtailing the public’s access to his policies in favor of using Twitter to attack opponent and to push his “America First” rhetoric.

Donald Trump has ensured that Twitter is now inextricably tied to the Presidency of the United States. Over the past 18 months, the social network has become central to political communication, alongside official campaign press releases. Trump, both as presidential candidate, and now as Commander in Chief, has used Twitter to instigate and participate in public debate on politics and policy; on a number of contentious issues, such as immigration, the public debate has turned into controversy. Now, Twitter has become a household name even for people who are not members of the social media network, as President Trump releases his 280-character statements which have become a common source of information for the mainstream media on Washington politics.

During the 2016 presidential election campaign, Twitter was an important medium of official communication with the public for the candidates. Its direct impact on electoral behaviour is hard to measure for a number of reasons, including that only 11 percent of Americans get their news from it, compared to the 50 percent who do via television. However, that Twitter played a major role in official campaign communications and in the promotion of candidates’ political agendas in 2016 is hard to question.

Political campaigns now use Twitter not merely for information sharing, but also for advancing political agendas. The official language of electoral campaigns is instrumental and strategic for promoting a certain ideological position. Nowhere is this as evident as in the most recent US election, during which the main three candidates (Hillary Clinton, Bernie Sanders, and Donald Trump) made strategic use of campaign official press releases and Twitter to legitimise themselves as candidates, to criticise their counter-candidates and to promote populist ideas. The use and promotion of populist ideas predominated in the official campaigns of both Republican and Democratic candidates, regardless of their ideologies.

Our findings rely on the analysis of Twitter data generated by harvesting all of the micro-statements that the three official campaigns issued during January – July 2016. We also included all official press releases available on each candidate’s campaign website. The analysis included 47,108 tweets (6,212 tweets by Clinton, 8,896 tweets by Sanders, and 32,000 tweets by Trump) and 512 press releases (112 by Clinton, under the heading ‘The Briefing”, 270 by Sanders, and 130 by Trump). At the time data collection ended on at the end of June 2016, Clinton had 7.12 million followers on Twitter, while Sanders had 2.66 million, and Trump 9.33 million.

The campaigns of all three presidential candidates in the US elections of 2016 made strategic use of language both in their official press releases and the Twitter-sphere, in order to legitimise their own political agendas and electoral platforms and delegitimise their counter-candidates. Compared to the other two candidates, Bernie Sanders made more than double the number of statements, which were also on average, considerably longer. Hillary Clinton’s campaign used official press releases as vehicles for presenting different aspects of her policy agenda while positioning it as a continuation of the main policies implemented by the Obama administration and in direct opposition to Trump and Sanders’ legislative proposals and political direction. The Clinton campaign made use of Twitter to promote messages that were very similar in nature to the ones promoted in the official statements, covering a wide range of topics and taking clear positions on a large number of issues. A better-known political candidate on the national political scene, the Clinton campaign chose to release fewer press releases and tweets. Qualitatively, however, her campaign covered the widest spectrum of topics and issues, and represented her as a candidate with extensive political and policy experience.

“turbob-pointydon-selfie2” by Oli Goldsmith is licensed under CC BY SA 2.0

Donald Trump’s use of press releases in the first half of 2016 stands in stark contrast with Sanders’, as the campaign issued far fewer statements which often contained only one paragraph alongside an official acknowledgment of support from a public figure. A very limited number of official press statements included detailed descriptions of policy proposals. His use of Twitter contrasts both qualitatively and quantitatively with the other two candidates’ communication strategies. Trump made much more extensive use of this medium to reach out to voters and also had over 30 percent more followers than Hillary Clinton and close to 60 percent more than Bernie Sanders. Trump’s tweets were predominantly critiques, often strident, of other candidates and were far less of a platform to promote his policy positions. In other words, his minimal use of press releases allowed Trump to limit the public’s access to clear and elaborate policy positions as well as the strategies to implement them in the event of a successful election result. By favouring Twitter use, his campaign limited communication to short and direct statements that favored personal opinions over official policy positions and strategies. 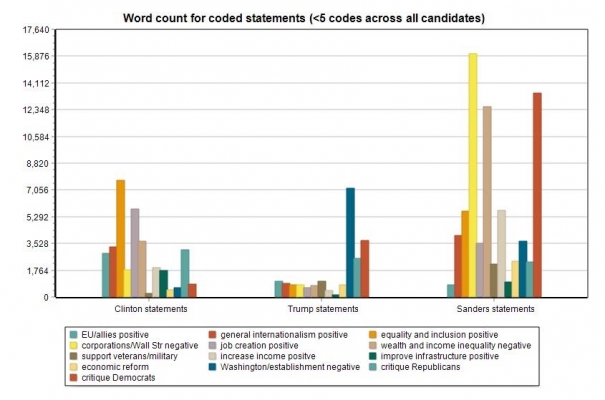 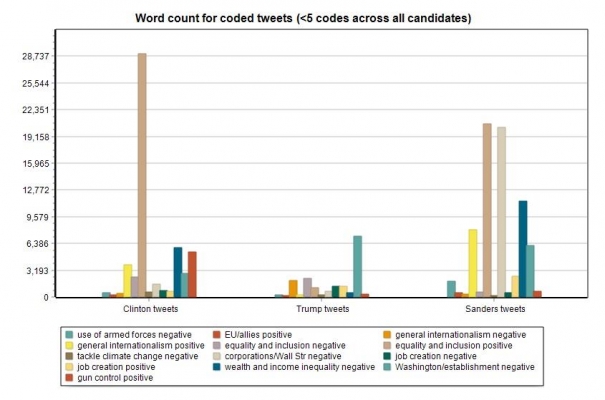 As Figure 2 shows, Clinton gave the protection and promotion of women’s rights, as the equal treatment of women in the work force and in access to healthcare, as well as the rights for the LGBT community, a central role in her campaign. Another dimension covered references to the rights of migrants to integration and support in American society. The strong focus on families and social support for all family members in Clinton’s campaign also incorporated the protection of children born to families with parents that have undocumented status. Another important theme was the need to address wealth and income inequality. Clinton’s campaign saw income and wealth inequality as tied to a low minimum wage, higher taxation of the poor, and fall in of middle class family incomes. She proposed job creation, an increased minimum wage, higher overall incomes, and a taxation system that favored corporations over individuals, as economic solutions to inequality. In addition, in her statements, income and wealth inequality were explained by social determinants of exclusion on the basis of race and gender.

Sanders sought to legitimise himself as a strong presidential candidate by supporting socialist solutions to, amongst other issues, income inequality, the corruption of Washington-based political elites, and economic policies motivated solely by the maximisation of corporate profit. Sanders engaged in limited direct criticism of the other presidential candidates compared to Trump and Clinton in the Twitter-sphere and he adopted a critical approach that was more issue-specific, critiquing both Republican and Democrat candidates and politicians more broadly, when he disapproves of their policies and solutions to social and economic problems. However, the Sanders campaign took a more critical stance on the other two candidates’ in its press releases and, more broadly, advanced a critique of the political establishment in Washington as a central campaign theme. The key solutions he proposed were inter-connected, beginning with the decoupling of the political establishment from corporate interests embodied by the Wall Street and continuing with the increased regulation of banks and financial corporations. In true populist spirit, politicians in both the Democratic and the Republican Parties who belonged to a certain category of corrupt Washington elites were the object of Sanders’ criticism and the main target of his call for systemic transformation. They were painted as being the main actors responsible for social and economic inequality and also the main obstacle in the way of Sanders’ socialist revolution in America.

Unlike the other two candidates, Trump’s campaign relied more extensively on Twitter for its public communications strategy and limited the content of press releases to advertising public events and rallies. A larger number of tweets issued by the Trump campaign were dedicated to defending some aspect of the candidate’s character or behavior from attacks made by the media, opposing candidates, the public, or other politicians. The Trump’s campaign narrative advanced a strong sense of a need to strengthen American protectionism in the face of national security threats such as terrorism, migration, and Islam more broadly is clear in the most prevalent themes amongst the codes with the highest frequency. While not consistently opposed to all types of immigration, Trump made very clear through his tweets his strong opposition to the integration and acceptance of undocumented migration. Stricter controls on migration flows, through legislation, a migration ban, and a wall along the border with Mexico, were essential components of what candidate Trump considered to be a sound national security policy which would safeguards against terrorism, job loss and crime. Moreover, in often aggressive and disparaging terms, Trump’s discourse was openly critical of political elites in Washington regardless of their political sympathies. By being different from political elites, he legitimised himself as a better and more reliable presidential candidate.

The campaigns of the three main presidential candidates in the American election of 2016 have provided additional evidence that Twitter has established itself as a central element in the official communication with the electorate. Both press releases, as a more traditional medium of communication, and Twitter were used for conventional campaigning activities, such as fundraising and announcements. Importantly, they were used for advancing certain policy positions on precise foreign and domestic policy issues as well as for legitimising the different campaigns as distinct from each other. Ultimately, their strategic use converges in the central goal of electoral campaigns, to promote each candidate as the best suited for the role of president of the United States.