In most 2016 election post-postmortems the role of education as a political issue has received relatively little attention. DeeAnn Grove argues that party positions towards school desegregation are actually key to understanding the white vote in the 2016 and past elections. She finds that since the 1960s, moderate white voters have had both a strong commitment to equal opportunities via education, while also ignorant of the extent of racial inequality in the US. Both the Republican and Democratic parties, she writes, have since crafted their political messaging on education in ways which make white voters feel good about racial politics either by supporting school choice or voucher-based policies.

The 2020 presidential election is fast approaching, but the 2016 post-mortem is still incomplete. One lingering question is what role did white voters play in the 2016 election? While education as a political issue has received little attention in the analysis of white voters in 2016, it is the issue mostly likely to reveal how candidates are trying to appeal to these voters.

Key to understanding the impact of white voters is appreciating how heavy the era of school desegregation still hangs over presidential politics. Internal campaign documents, housed in presidential libraries and other public and private archives, reveal that campaign strategists from both major political parties believed their party’s school desegregation position in the 1960s and 1970s altered white moderate voters’ perceptions of their party in ways that persist.

White voters have been of two minds over school segregation

After the civil rights gains of the 1960s, political strategists from both parties were confounded by white moderate voters because two seemingly contradicting attitudes emerged. First, they expressed a strong commitment to equal opportunity, and they believed that education was the most vital institution to ensure equal opportunity. Second, these voters demonstrated a lack of knowledge—or perhaps, willful ignorance—of racial inequality in American society.

The Supreme Court’s 1954 Brown v Board of Education decision addressed school desegregation in Southern schools but did not adequately address school desegregation outside of the South. As desegregation efforts moved North in the 1960s and 1970s, children had to be bussed to overcome extreme housing segregation in Northern, Eastern, and Western cities. Both Republican and Democratic candidates for the presidency struggled with how to appeal to white moderate voters who claimed to support school desegregation but vehemently opposed the most readily available tool to desegregate schools—busing.

Candidates and their campaign strategists regularly discussed white voters’ denial of racial inequality in the United States and questioned their commitment to equal opportunity. A 1968 Hubert H. Humphrey campaign report stated that “white America has very little idea how black America lives.” The report noted that a significant majority of white Americans believed Black Americans were “treated the same” as whites and that businesses did not commit racial discrimination. A Nixon advisor explained that white voters “profess to believe in … egalitarianism” even if they “often … betray[ed] it in real world situations.” The 1976 Ford campaign described white voters who resisted busing as “people who used to be strong on civil rights.”

Not surprising given the attitudes of white Americans, neither political party strongly supported school desegregation efforts outside of the South. Republicans fought for “neighborhood schools” that would maintain segregation. Democrats stressed more funding for segregated urban schools. This position reflected an understanding of white voters who, as a 1976 Carter campaign report stated, supported increased federal funding for segregated urban schools “as a compensation for their opposition to busing.”

By the 1980 presidential election, white voters had lost their professed interest in desegregating schools. Consequently, parties shifted the debate from the constitutional violation created by school segregation to a benign call for quality education for all students.

Yet, strategists were concerned about the lasting effect of school desegregation on their parties’ reputations. Many in the Republican camp worried, as a Ford adviser explained, that “relatively few Americans perceive the Republican Party as a political organization that has compassion and concern for the lives of the average citizen, particularly people of below-average economic status.” In contrast, Democratic campaign strategists became increasing concerned about Republicans’ charge that Democrats’ support for desegregation—soft as it was—evidenced that they pandered to people of color. 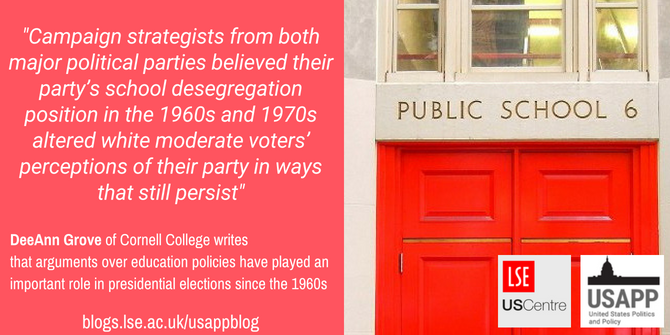 Education as a presidential campaigning tool for both parties

Because education had created these damaging party reputations, it became the issue by which each party attempted to overcome their image problems. Republicans used school vouchers to show that they cared about minority children. Democrats advocated increased public education funding and to a lesser extent, public school choice, policies that would also benefit white students.  Both positions were carefully crafted to reflect white voters’ support for equal opportunity and denial of racial inequality.

In his 1980 presidential campaign, Reagan was advised to find a policy that would benefit Black Americans because it “would certainly beam a positive message to white voters who like their Presidents to demonstrate that they are broad-minded.” Advocating for school vouchers for students of color in urban schools offered Reagan, and later other Republican candidates, a way to reassure white voters of their concern for children of color. Likewise, when the Los Angeles Riots broke out in 1992, the Bush campaign team argued that discussing education broadly and vouchers specifically would be easy issues to use in reassuring white voters of Bush’s racial sensitivity.

In 1996, Bob Dole made vouchers a central feature of his campaign stops, regularly identifying a minority student in attendance that needed vouchers to have equal opportunity. Dole also floated a new appeal to white voters by claiming access to vouchers was the “civil rights movement” of the day.

Republicans use of vouchers to appeal to white voters increasingly concerned Democratic candidates. A Clinton campaign adviser explained in 1996, “We need a better answer to vouchers than we have, especially when the debate focuses on doing something for disadvantaged kids in failing (mostly inner city) schools.”  Yet, they were concerned with appearing too concerned for students of color.

After losing three presidential elections in a row, Democrats’ reinventing government program of the 1990s aimed to convince white voters that they would not provide an entitlement lifestyle to racial-ethnic minorities. When James Carville said, “It’s the economy, stupid,” he was signaling that the 1992 Clinton campaign understood that white middle-class voters were anxious about their children’s future in the emerging global economy. Being concerned about their children’s education was new for these voters.

Democratic candidates have tended to emphasize improved educational quality through increased federal funding, which they believe resonates with white middle-class voters by confirming the important role education plays for all children in an equal opportunity society. As white voters have increasingly supported public school choice, Democrats have followed suit. Like their federal funding position, Democrats discuss public school choice as ensuring quality education for all students.

Beyond promoting their own education agenda, Democrats have devoted significant attention to attacking Republicans’ voucher support. These attacks seek to convince white voters that Republicans do not care about black students because voucher programs “drain taxpayer money away” from black students’ urban schools.

Neither education nor vouchers were top 2016 election issues. Yet, both continue to play an important role in campaign appeals to white voters. Both candidates’ campaign rhetoric was consistent with their predecessors’ attempts to appeal to white voters using education. Donald Trump placed vouchers for urban Black students at the center of his civil rights agenda. Hillary Clinton echoed Americans’ belief that public education is vital to equal opportunity and pledged to increase funding for all schools.

Education might be a minor issue during most presidential election cycles, but it does a heavy lift for Republican candidates by reassuring white voters of their racial sensitivity. This means they do not have to do so on other issues. Democratic candidates’ fear of appearing too concerned for people of color leads them to support deracialized education policies.

These messages likely make white voters feel good that their candidate is demonstrating the right balance between racial sensitivity and pandering, but does nothing for the students of color, who continue to attend underfunded, segregated schools. As we continue to unpack the role of white voters in the 2016 election and prepare for 2020 analysis, we might revise Carville’s 1992 slogan, “It’s school desegregation, stupid.”

DeeAnn Grove – Cornell College
DeeAnn Grove is an education consultant in the state of Iowa and teaches in the Department of Education at Cornell College. Her research examines the impact of education politics on the educational experiences and outcomes of students from minoritized populations. Her research on education as a political issue in presidential politics has been supported by the George H.W. Bush School of Government and Public Service, The Dole Institute of Politics, and the Gerald R. Ford Presidential Library.