In 2012, the now Senator Joe Donnelly replaced an over 30-year incumbent Republican in Indiana. In 2018, Donnelly now faces tough competition from state legislator Mike Braun to keep his seat in the Hoosier State. Laura Merrifield Wilson writes that while the state as a whole is very red, Donnelly has generally tacked to the center as a bipartisan moderate meaning that the campaign is being fought over specific positions on issues like healthcare and immigration rather than on partisanship. Whether voters will stick with the moderate Donnelly or instead turn to the Trump-surrogate Braun remains to be seen.

Indiana’s Senate race is not a normal one but then, for this particular US Senate seat, it never has been.  In the last four decades, only two men have occupied one of Indiana’s two coveted seats.  Richard Lugar, a name now synonymous with Indiana politics but relatively unknown at the time, first took it from 18-year incumbent Vance Hartke in a sweeping landslide in 1976.  Then, Joe Donnelly won the seat in 2012, despite a national Republican surge, beating out Richard Mourdock whose extreme views led to his victory over Lugar in the primary race but whose controversy cost him the general election.  Now, in 2018, Donnelly faces stiff competition, both in his opponent and the general political climate that prove why this Senate seat is one that has garnered national attention.

If you didn’t already know Joe Donnelly’s party allegiance, it might be hard to guess.  In his six years as a Senator, he voted in favor of healthcare expansions, against the Trump tax plan, and against the recent confirmation of Justice Brett Kavanaugh to the US Supreme Court.  He has also voted in favor of a number of pro-life measures, against many regulations on guns and the right to bear arms, and he voted in favor of appointing Justice Neil Gorsuch to the US Supreme Court.  Oh, and if you thought you might have guessed Donnelly’s political affiliation, in the first senate debate on October 8, when prompted about his personal hero, he answered, with firm conviction, “John McCain.”

Donnelly is a Democrat, a point that his challenger Republican Mike Braun will happily remind you.  Braun won a contentious primary for his party in May, defeating two incumbent congressmen in what was one of the ugliest political races in state memory.  Braun’s victory came at a cost; while Donnelly faced no primary opposition and has focused all his attention and money on his Republican opposition, Braun’s victory over more well-known politicians in the primary required significant energy and money.  Now just weeks until Election Day, the unusual dynamics of this race are generating buzz throughout the state and country. 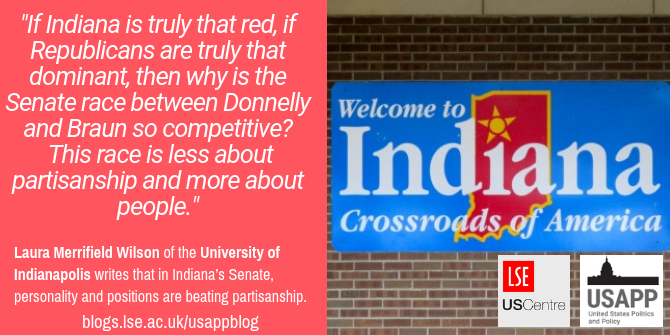 Indiana is a red state, so red that the Republicans dominate all statewide executive offices and hold a super majority in both chambers of the Indiana General Assembly.  It is so red that the popular vote preferred Trump to Clinton by 19 percent in 2016, one of the widest margins across the country.  Even the two open House seats available in the state (once held by the two contenders who failed to beat Braun in the primaries) are seen as so deeply Republican, the de facto assumption is that the primary election has essentially determined the entire election outcome.

If Indiana is truly that red, if Republicans are truly that dominant, then why is the Senate race between Donnelly and Braun so competitive?  This race is less about partisanship and more about people: both those running for office and those who will eventually vote for them.  Braun campaigned successfully in the primary on the coattails of Trump’s popularity within the state, but the same message and image that sold over the steadfast partisan voters who participate in primaries may not have the same effect on the range of voters from various ideologies and interests who turn out for the general election.  Donnelly landed almost accidentally into victory when he first won in 2012; one can muse that had Lugar won his primary reelection, or had Mourdock refrained from declaring factually inaccurate health information, Donnelly would have never made it to the Senate in the first place.

What is clear in the race to represent Indiana is that partisanship doesn’t matter, but personalities (and positions) do.  Braun has positioned himself as an outsider, as a businessman with acute economic acumen and a thrifty [sense] of common sense that Washington D.C. desperately needs.  As Trump first proclaimed he would drain the swamp, Braun believes that he can continue that promise.  Messaging is no good if the image doesn’t match and Braun’s go-to uniform of a button-up blue shirt (literally: blue collar) and rolled up sleeves portray a man who is ready to rough up and incite change within the capital.  Donnelly shares some of Braun’s casual demeanor but with a decidedly different twist.  Early campaign ads showed Donnelly himself driving his campaign bus across the state; the Senator often rolls the sleeves of his button-up shirts as well though the collars are white and often adorned with a tie in a bold and vibrant hue.  Both men depict a kind of down-home Hoosier persona that will resonate with Indiana voters.  So then where are the differences?

Since partisanship isn’t decisive and personalities are similar, voters will have to focus on issues and politics.  Luckily for voters, as commercials, debates, and news make clear, Braun and Donnelly diverge on virtually all important issues underscoring this election.  On healthcare, immigration, Kavanagh’s confirmation, energy and the environment, and the future of the state, both candidates provide a stark contrast from the other.  Donnelly is carving a niche as a bipartisan moderate, minimizing partisanship and emphasizing his alignment with the president (surprisingly frequent for a Democrat).  Braun is modeling himself after the president who took the state by force in the last election, touting his approval of the administration’s agenda and promising to reaffirm it if elected.  Libertarian Lucy Brenton offers another choice on the ballot, although surmounting the challenges facing third parties in American elections usually proves too difficult to achieve.

The race for Indiana Senate between Donnelly and Braun represents one of the most competitive and unusual races in this election cycle.  As the election draws near, Indiana voters will be considering positions and personalities over partisanship as they cast their ballots.  For Hoosier voters, it is their representation at stake; for the national audience that waits and watches, it is the tenuous balance of partisanship within the Senate, the slight Republican advantage and the slim Democratic minority.  Whether it is retained or changed is the question to which Donnelly and Braun, respectively, will answer.

Laura Merrifield Wilson – University of Indianapolis
Laura Merrifield Wilson is an Assistant Professor of Political Science and the Assistant Director for Fellowships of the Strain Honors College at the University of Indianapolis.  She specializes in state government, campaigns and elections, and gender politics.  Her research has most recently been published in the Midwest Journal of Social Sciences, the Alabama Review, and the Indiana Journal of Political Science.  She is currently completing a manuscript detailing the role of women in Alabama state politics.