In the lead up to last week’s midterm elections, polls consistently showed that healthcare was on the forefront of many Americans’ minds. With the Democratic Party now in control of the US House of Representatives, Republican efforts to repeal President Obama’s signature healthcare reform, Obamacare, are likely to be significantly curtailed. But that doesn’t mean they will end completely, argue Simon F. Haeder and Philip Rocco. Drawing on evidence from their research on previous Republican actions to repeal Obamacare, they write that the influence of activists within their party means that the GOP are likely to continue their efforts to impede the full operation of the Affordable Care Act at the state level, through the courts, and via executive actions.

The Affordable Care Act (ACA) was a big winner in last week’s elections. Across the country, Democrats ran on protecting pre-existing conditions, defeating Republican governors like Wisconsin’s Scott Walker, who had used their office to obstruct the implementation of healthcare reform, as well as the architects of congressional efforts to repeal the law like Rep. Tom MacArthur (R-NJ). Ballot measures to expand Medicaid passed in the deep red states of Idaho, Nebraska, and Utah.

Yet legislative losses for Republicans do not mean that the ACA is now safe from interference. As our research shows, there are good reasons to believe that Republicans will continue to pursue their long-held goal of undoing President Obama’s signature accomplishment. While full-blown statutory repeal (and replace) now seems off the agenda with a Democratic takeover of the House, Republicans continue hold many tools at their disposal to continue their question to impede the ACA’s full potential.

Our recent work shows that repeal efforts have been driven not by voters but by “intense policy demanders.” These are mobilized activists within the Republican coalition that use their control of important electoral resources to shape the policy agenda.  When it comes to the ACA, these extremists have defined the politics of repeal and replace in fundamental ways. There is little reason to suspect that they will relinquish this goal.

What Republicans Have Done to Make the ACA Fail

While our most recent research is focused on hotbeds of Republican in Congress, Republican opposition has of course not been only come from the US Congress. Many Republican-controlled state legislatures and governors have done their fair share to oppose the implementation of the Affordable Care.

Dozens of lawsuits have been filed seeking to overturn parts or the entirety of the healthcare law. Many states have refused to establish insurance marketplaces or expand their Medicaid program, leaving millions of Americans uninsured and victims of a political struggle. Various states have passed unenforceable statutes and constitutional amendments seeking to nullify the ACA within their borders. Others have prohibited state employees from cooperating with the federal government in any implementation activities. Some states are seeking to establish a so-called health compact that would allow them, with Congressional approval, to circumvent ACA requirements. Most recently, states like Idaho and Iowa are seeking to establish alternative insurance markets to sell low quality insurance products prohibited under the ACA.

Our Research on Republican Opposition in Congress

Our research focuses on the actions taken by Republicans in the US Congress in opposition to the Affordable Care Act, which has seen little scholarly attention so far.

We argue that much of the persistence of Republican resistance in Congress more than eight years after the passage of the ACA can be attributed to intense policy demanders. These ideological extremists like the Koch-funded Americans for Prosperity seek to use resources at their disposal like campaign contributions to support like-minded individuals in their quest for political office in return for loyalty commitments to their favored causes. And indeed, it was these intense policy demanders that defined the boundaries of the retrenchment agenda during the early implementation of the ACA and beyond. 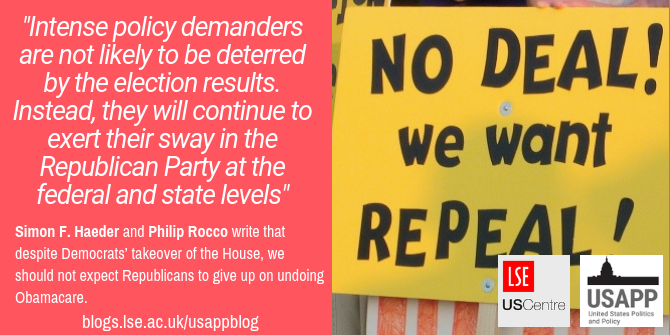 The second part of our analysis looked at the votes of Members of the House of Representatives on the first major repeal effort under the Trump Administration, the American Health Care Act (AHCA).

In its initial form, the AHCA proved decidedly too liberal for groups like the Heritage Foundation and the Koch-funded Americans for Prosperity, terming it “Obamacare Lite.” Not surprisingly, in a whip count taking days before an expected vote, the group closest to AFP and Heritage, the Freedom Caucus, refused to support the bill pushed by Speaker Paul Ryan. Indeed, membership in the Freedom Caucus proved the overwhelming predictor of Republican opposition to the AHCA.

Seeking to salvage their repeal-and-replace efforts, Republicans were able to negotiate an agreement that sought to bring that vast majority of Congressional Republicans on board, the so-called MacArthur amendment. The amendment allowed states to opt out of almost all the requirements of the ACA. As a result, virtually all Republicans in the House of Representatives eventually voted for the bill.

That House conservatives ran the table on the AHCA should be instructive given the results of last week’s elections. By and large, Democrats’ wins last week wiped out moderates while the conservatives who pushed a more hardline version of ‘repeal and replace’ largely remain in office. While they may not be able to push their preferred legislation out of the House, it is doubtful that their positions on the ACA will changes substantially.

What Our Research Indicates for the Future of the ACA

Outright repeal seems off the table for the time being. However, intense policy demanders are not likely to be deterred by the election results. Instead, they will continue to exert their sway in the Republican Party at the federal and state levels.

Perhaps equally important, with an extended majority in the Senate, Republicans will move swiftly ahead with confirming solidly conservative judges. With many parts of the ACA still in litigation, and with a significant need for continuously issuing regulations, the courts continue to remain pivotal when it comes to the implementation of the health law. Moreover, moderates Lisa Murkowski and Susan Collins have now lost their pivotal status when it comes to judicial nominees, who can be confirmed with simple majorities.

Even with large Democratic gains in the states, a large number of states remain solidly in Republican hands. This bodes ill for the further expansion of Medicaid or the strengthening of insurance markets for example via state-based individual mandates or reinsurance programs.

Finally, the ongoing Texas v. Azar lawsuit remains a potential wild-card. Seeking to achieve what Republicans in Washington, DC have been unable to do, Republican attorneys-general, led by Texas, are aiming to wipe out the ACA through the judicial pathway. While this case is likely headed to the Supreme Court, its outcome appears completely open. Of course, should Republicans be successful, all the cards will be reshuffled.

Philip Rocco – Marquette University
Philip Rocco (@philiprocco) is an assistant professor in the Department of Political Science at Marquette University. He is the co-author of Obamacare Wars: Federalism, State Politics, and the Affordable Care Act (University Press of Kansas, 2018). His work has been featured in, among other venues, Journal of Health Politics, Policy, and Law, Political Science Quarterly, Publius: The Journal of Federalism, Journal of Aging and Social Policy, and Policy Studies Journal.