Unlike the 2016 presidential election, in this year’s midterms, the pollsters for the most part got it right. Ronald Ranta writes that the polls were also correct in predicting two elections – one where the Democrats would dominate in US House and state races, and the other for the US Senate where Republicans winning and holding on to seats in red states. He argues that despite talk of a ‘Blue Wave’, the elections were not quite a walkover for the Democrats: they will need to count the reasons for their failures in Florida and Ohio and much of rural America ahead of the 2020 presidential election.

Two of the main casualties for pollsters in most elections are often their reputation and their credibility. In the US, their perceived failure to predict the election victory of Donald Trump left many to question if they could ever be trusted again. Going into the midterms, the leading pollsters had to prove that they learned the right lessons from 2016 and adjusted their models accordingly. Overall, and despite the uncertainty generated by the highest midterm turnout in over a century, it is surprising how well they performed.

The main question pollsters grappled with was not whether the Democrats would make some gains, traditionally the President’s party losses seats in the midterms, but how big these would be. In other words, would the demographic shifts they were encountering in their surveys, among women, minorities, millennial and educated voters, generate the necessary momentum for a Democratic blue wave? There were many reasons to believe they would. It did not help the Republicans that Trump’s approval ratings were historically low and that his administration and the GOP were mired in a string of scandals. Nevertheless, there were a number of factors that threatened to limit potential Democratic gains. The polls showed that Trump supporters remained loyal and that voters were by and large supportive of Trump’s handling of the economy. Many House seats were also gerrymandered by the GOP and the Democrats had to defend several Senate seats in very Red states.

Let’s start with the blue wave. The broad picture that emerged from the midterms was a deeply divided electorate. Just as the polls had anticipated, the midterms were actually two separate elections, one for the House of Representatives and state level assemblies and governor’s mansions, and another for the Senate, with the former taking place in urban and suburban areas and the latter one in rural ones. In the end, a blue wave did sweep across urban and suburban America, but it hit a GOP red wall in rural areas.

The generic ballot polls had shown for over a year a Democratic advantage of around 8 percent. The polls also showed educated and middle class suburbanites, in particular educated white women, turning away from Trump and the GOP. As a result, pollsters expected a democratic gain of around 35 seats and a takeover of the House. The midterm results support these expectations. They show a historic gender gap of around 20 points and an overall Democratic win of just under 8 percent. Democrats are poised to win 40 seats (California’s 21st district has yet to be decided), sweeping suburban America. As predicted, the midterms turned what were once seen as republican leaning, suburban congressional districts into GOP killing fields. This was very much a night to forget for the GOP, particularly in New England, where they ended without a single seat, and in California, where the GOP lost six seats and where some Republican analysts have subsequently declared that the party was dead! 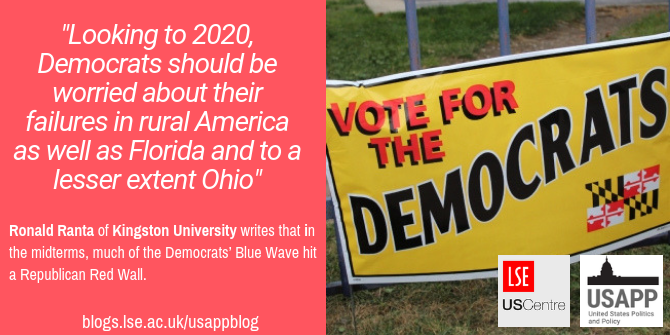 “01.VoteDemocrats.BaltimoreMD.26October2018” by Elvert Barnes is licensed under CC BY SA 2.0

It is remarkable that House races, traditionally much harder to call because of limited and less reliable polling, went very much as expected. The only surprise was the 5th congressional district of Oklahoma, home to Oklahoma City and its suburbs, which went to the Democrats for the first time in almost half a century.

The blue wave was also visible across the Midwest, where Democrats performed well, gaining around a dozen House seats, and winning the governor races in Illinois, Michigan and Wisconsin and narrowly losing Iowa and Ohio. The only area for concern for Democrats is that the Republican did better than the polls predicated in the pivotal state of Ohio. Overall the democrats flipped over seven GOP governor mansions and came close in many others, including Georgia and Florida. Buoyed by record level turnout of Latino voters Democrats also did well in the South West, winning house seats in New Mexico, Texas, Nevada and Arizona, where they also won two senate seats.

For all the talk of a blue wave, there was also a visible red wall. The polls predicted that Democrats would struggle to defend Senate seats in red states, with many writing off their chances of holding onto North Dakota and giving them even odds in several other contests. None of the main polls gave Democrats a chance of winning the Senate, with most predicting a loss of one seat overall. It was not a surprise therefore that the Republicans increased their Senate majority by two seats, with the Democrats losing North Dakota alongside Missouri and Indiana, and failing to win in Tennessee and Texas, though they did come surprisingly close in the latter partially because of the charisma of their candidate Beto O’Rourke.

The only area where the polls had a mediocre night was in Florida, where Republicans had a good showing winning most state races, including the governor’s race and a Senate seat. Hardly any polls showed Republican Ron DeSantis leading in the governor’s race. The Senate race was closer, but again the major polls showed Democratic Senator Bill Nelson with a narrow lead. While the final results were well within the margin of error, this was somewhat unexpected. These results were also in line with the milder than expected night Democrats had in Florida more generally. It is not clear at this point what the causes for this oversight are. It could well be that Trump’s last minute rallies paid dividends in Florida, as they might have done in several other red states. The one positive for Democrats in Florida was the success of the ballot initiative to restore voting rights to ex-felons, a move that could potentially add a million new voters. Polls had consistently shown the initiative had strong support.

Looking to the 2020 Presidential elections, Democrats should be worried about their failures in rural America as well as Florida and to a lesser extent Ohio. However, losing women by 20 points, with record numbers of minority and millennial voters, should petrify Trump and the GOP. Both need to hope the US economy remains strong for another 24 months, Trump’s re-election might depend on it.

November 28th, 2018|Elections and party politics across the US, Making Sense of the Midterms 2018|0 Comments
Previous post Next post