Last month, President Trump announced that US troops would be leaving Syria. While some have suggested that Trump’s move is yet another example of the President pandering to his base, Thomas Gift and Jonathan Monten show that recent survey data do not bear this out: 70 percent of Republicans who back Trump support the use of US troops overseas to fight extremist groups. They reason that the perception that “middle America” wants a more isolationist foreign policy has been pushed by the media and has fueled Trump’s policy change.

President Donald Trump’s snap decision in late December 2018 to withdraw troops from Syria shocked the US foreign policy establishment. From the Pentagon to Capitol Hill, the response inside the Beltway was swift — and almost uniformly critical. Even loyal voices within the GOP pilloried the move, with Senator Lindsey Graham (R-SC) calling it an “Obama-like” blunder.

As the dust begins to settle on the implications of the decision for American and Middle Eastern security, it’s worth asking why Trump would make a move that was so unsettling it even led to the resignation of his own defense secretary.

One explanation for Trump’s decision is that it’s pure politics – the president is doubling down on his “America First” foreign policy because it appeals to his Republican base.

According to many experts, mounting support exists within the Republican Party for a new brand of conservative nationalism, in which the United States unilaterally pulls back from international agreements, reduces its military commitments, and rethinks relationships with traditional allies. Syria is just the latest step in this isolationist pattern, following Trump withdrawing the United States from the Paris climate agreement, abandoning the Iran nuclear deal, and exiting the Trans-Pacific Partnership.

Whether there’s a political payoff to these actions presupposes that most Americans — and particularly Trump supporters — are skeptical of US involvement abroad. Newly-appointed Acting White House Chief of Staff Mick Mulvaney insists that “[exiting Syria] is a promise kept by the president of the United States. It may upset a lot of people but the folks that voted for the president like it.”

Trump’s base may not be with him on Syria

But does Trump’s base really favor the decision?

Recent survey data offer reason for doubt. Even more, they reveal that Trump may be damaging himself politically by adhering to the conventional wisdom that many Americans are reluctant to engage the broader world.

According to a survey conducted by the Chicago Council on Global Affairs in 2018, a majority of Americans (57 percent) support the use of US troops “to fight violent Islamic extremist groups in Iraq and Syria.” That number jumps to 70 percent among Republicans who support Trump. 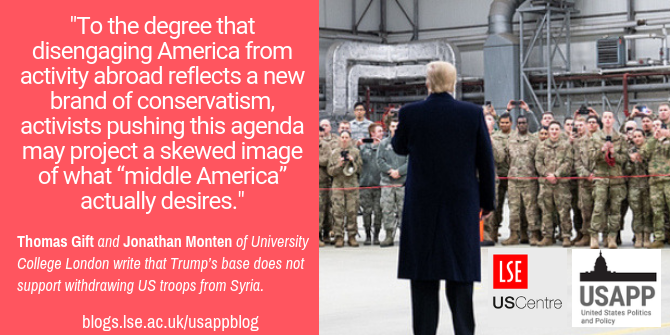 We aren’t the first to observe that Trump’s decision to withdraw troops from Syria marks a departure from what his base wants. But if Trump’s playing politics on Syria, why would he defy poll numbers?

The answer is because this isn’t the narrative that’s typically depicted.

Research by Harvard’s Theda Skocpol and Columbia’s Alexander Hertel-Fernandez shows that conservative activists – including deep pocketed donors – have been especially effective in recent years at pushing forward a specific right-of-center message. According to Stanford’s David Broockman and Northwestern’s Christopher Skovron, when the views of a small group of conservatives get disproportionately pushed, it misleads politicians, especially Republicans, into overestimating how conservative their electorate really is.

To the degree that disengaging America from activity abroad reflects a new brand of conservatism, activists pushing this agenda may project a skewed image of what “middle America” actually desires.

Our own research suggests that this problem could be exacerbated by a misinformed media. When journalists latch onto faulty stereotypes about what Republican voters in places like rural Pennsylvania and suburban Wisconsin want, the storyline becomes hard to shake.

In a working paper, we analyze new survey data from the Chicago Council on Global Affairs, which asked a nationally-representative sample of Americans whether they “think it will be best for the future of the country if we take an active part in world affairs or if we stay out of world affairs?” It then asked a pool of foreign policy experts how they think the public answered.

We discover that members of the media — more than other experts, including academics, think tank scholars, and interest group members — significantly underestimate how much Americans want the United States to be involved in world affairs. On average, members of the media guess that just 45 percent of Americans favor US engagement abroad. The real number? 70 percent.

It’s hard to believe that this misperception doesn’t distort reporting about the public’s views on US foreign policy.

Professional incentives might be one reason why the media are out of touch with the American public. Amid the 24-hour news cycle, journalists face unrelenting pressure to capture the next headline. This could mean a temptation to search for new and attention-grabbing narratives in reporting political phenomena, focusing on a few anecdotes suggesting rising conservative nationalism, but overlooking larger trends.

Trump revels in attacking the “mainstream” media, calling it the “Enemy of the People” and blasting purveyors of “fake news.” But even as the president harangues the media, he’s a voracious consumer of their product. Trump’s said to be an avid fan of at least one show — “Fox & Friends” — even as he’s mocked “#FraudNewsCNN” on Twitter and denigrated journalists in vile and despicable ways.

In following the media, Trump might have concluded that exiting Syria is what his voters want. The reality is that he’s not only flouting the US foreign policy establishment. He’s alienating his own conservative base.