Last week, President Joe Biden announced an ambitious infrastructure plan that he hopes will form the basis of his next major legislative achievement. The $2.3 trillion proposal would devote money toward upgrading America’s roads, bridges, and airports, but also contains other, more controversial provisions that critics say Washington can’t afford. In this Q&A, Thomas Gift examines what the bill contains, its strengths and weaknesses, and how likely it is to be approved by Congress and signed into law.

President Biden’s bill is a sprawling, $2 trillion proposal that seeks to revitalize America’s infrastructure, expand employment opportunities, and undertake strategic investments to make the US more globally competitive. Approximately $620 billion would be devoted toward transportation infrastructure (including roads, bridges, public transport, and airports) and $650 billion toward other domestic infrastructure (like broadband internet, drinking water, housing, and K-12 and higher education). In addition, Biden proposes spending $580 billion on investments in the business sector, research and development, and workforce development, as well as another $400 billion on caretaking enterprises, mostly for the elderly. The president claims that a majority of the increased federal expenditures the bill calls for would be paid for by raising the corporate tax rate from 21 to 28 percent.

Can the US afford an infrastructure bill of this size?

There’s certainly concern that Biden’s proposal will further balloon the federal deficit, which has only grown larger as a result of the three COVID relief packages under both Trump and Biden. Add to this another $2 trillion in federal outlays, and even with the tax hikes on corporations, there’s reason to be concerned about the debt. And that’s not even mentioning the possibility of overheating and inflation, which some economists have warned about. Biden’s plan outlines spending over eight years. He says that it’s paid for. But what he’s not highlighting is that it’s only paid for over the course of 15 years. And that’s probably an idealized scenario because it’s highly unlikely the corporate tax rate will remain elevated if Republicans return to power. So deficit hawks will be out in full force with this bill, and GOP lawmakers will make the debt a key component of their opposition. 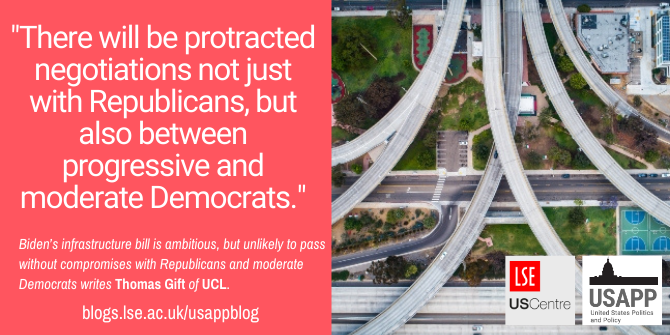 Photo by Abraham Barrera on Unsplash

Is this bill all about infrastructure, or do Democrats have other objectives?

There’s infrastructure, and then there’s infrastructure. A big sticking point will be that Biden’s definition of infrastructure seems to be much more encompassing than many Republicans agree with. The critique is that Democrats are trying to use this bill to advance a much more ambitious social agenda—including on issues like inequality and climate change—that extend far beyond what’s conventionally characterized as infrastructure. On the Republican side, there’s a reasonable degree of consensus that the US could use improvements to its infrastructure. But according to one analysis, only about 5 percent of spending in Biden’s bill is actually devoted to roads and bridges. Instead, what we see is funding for items like clean energy, home and community-based care for the elderly, and even worker rights provisions. All of these will be flashpoints for controversy.

Do you expect the bill to pass?

If this bill passes, it won’t be for a while. There will be protracted negotiations not just with Republicans, but also between progressive and moderate Democrats. What the White House is doing is putting out its wish list, staking out a strong bargaining position, and then expecting to compromise. The bill will get watered down. Democrats may try to push the legislation through budget reconciliation, similar to what they did with the last COVID-19 relief bill. That’s a special – and until recently, seldom-used – budgetary process that wouldn’t require Republican support. But even there, it seems doubtful that moderate Democratic Senators, especially West Virginia’s Joe Manchin, will go along unless Democrats exhibit a good-faith effort to reach across the aisle. So ultimately, if this bill does pass, its final form will probably bear little resemblance to what Biden announced last week.