How do you get from A to B every day? For many Americans, the answer to that question is some form of public transport. In new research Juita-Elena (Wie) Yusuf examines how transit provision can influence the shape of America’s cities. She finds that cities with urban rail transit were more likely to have a higher proportion of college-educated 25-34 year olds living centrally.

While we tend to think of the US as a car-dominated society – especially when compared to countries in Europe and elsewhere – tens of millions of Americans use public transport every year to get around. In new research, we investigate how investment in American rail infrastructure has shaped population and residential patterns, with a specific focus on how commuter rail and urban rail transit systems may have influenced where college-educated young people live in US cities. We find a strong link between the presence of urban rail transit (light or heavy rail) in a city and a larger proportion of young college-educated people living closer to the city’s centre.

Many cities have adopted policies to improve accessibility to the city center by investing in rail transit and emphasizing developments near to these services (so-called ‘transit-oriented development’). Rail transit and related development are expected to attract talented, affluent residents nearby and improve the tax base. More affluent residents, primarily those with college degrees, tend to reside in parts of the city that are economically-functional and aesthetically-desirable, particularly in and around the urban core and along transit routes.

Rail transit includes both commuter rail and urban rail transit. Commuter rail encompasses regional and suburban rail systems that generally connect the downtown to surrounding suburban communities. This type of rail serves the metropolitan areas of many of the largest US cities including New York City, Chicago, Philadelphia, and Washington, D.C. Commuter rail systems tend to serve affluent professionals and managers who live in low-density, outer suburbs and commute into the central city for work. Urban rail transit, on the other hand, transports passengers within the city center and inner suburbs. Sometimes referred to as rail rapid transit, it includes heavy rail (such as subways or metros) and light rail transit (like streetcars).

Heavy and light rail systems were built in the early decades of the 20th century, but saw decline in the post-war era as cars gained in popularity in America. In the later decades governments invested heavily in new roadways, but the limits of building highways were soon recognized. By the 1970s, many community leaders, politicians, environmentalists, and downtown business owners were calling for greater investment in rail infrastructure. They argued that rail would reduce the need for new highways, contain suburban sprawl, reduce air pollution, stimulate higher density development and redevelopment around rail stations and stops, and attract the affluent middle-class back to the cities. Investment in transit rose considerably, with substantial emphasis on heavy rail, light rail, and commuter rail.

Rail transit infrastructure may influence population movement. Recent research shows show that the number of young college-educated residents living near the city center of the largest 51 American metropolitan areas has grown significantly over recent years. A 2014 report found that, among 27 cities that had declining populations, 25 had an increase in the number of 25 to 34 year old college graduates residing in central neighborhoods (defined as neighborhoods located within 3 miles of the central business district). Another study similarly noted that within the 25 to 49 year old age group, those with college education were more likely to live in urban neighborhoods and higher-density urban core neighborhoods in 2014 compared to 2000.

The younger population is also driving less. This suggests that the young, college-educated residents may be more willing to rely on transit for some or even all of their travel needs, and therefore more likely to move to cities with transit options. 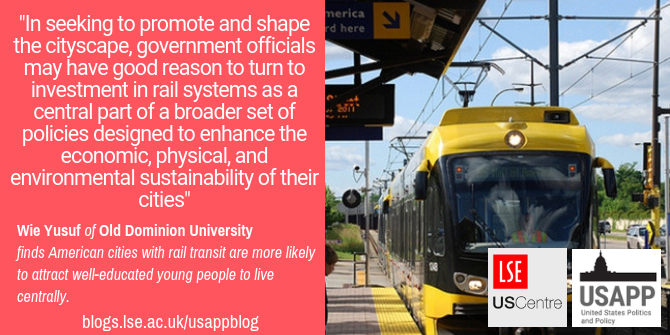 Many rail transit systems are relatively new or newly expanded, which may attract new ridership when developed in conjunction with transit-oriented residential and commercial development. Commuter rail systems bring suburban residents living far from the city center into the city. Urban rail transit systems are more likely to serve city residents with more stops, especially those living close-in. We expect that urban rail transit, more so than commuter rail, will influence residential location choices in close-in neighborhoods and the city center.

To study the growth in young college graduates in cities with different rail transit configurations, we used a sample of central cities within the US’ 51 largest metropolitan areas.  Of the rail transit systems operating across the US, all but three are operating in these areas. Since 1984, 31 had been either built or expanded.

Note: None of the cities offer the combination of bus and heavy rail

Our analysis found that central cities with urban rail transit (light or heavy rail) experienced greater increase in the percent of the young college-educated living close-in (within three miles of the urban center). Furthermore, it may be the case that government investment in rail connected to the downtown—heavy rail as well as light rail—can spur a virtuous cycle of inner-city development, including new residential multi-unit dwellings. Clearly, in seeking to promote and shape the cityscape, government officials may have good reason to turn to investment in rail systems as a central part of a broader set of policies designed to enhance the economic, physical, and environmental sustainability of their cities.

A final caveat is necessary. While our analysis suggest that the presence of rail transit can draw the young, college-educated to the city center, they do not establish a clear causal relationship for several reasons. Clearly, more studies are needed, as research suggests that rail transit can impact location choices and related developments under some conditions but not others.

*This article highlights key results of the chapter “From College to the City: Implications of Urban Investments in Rail Transit Systems on the Movement of the Young, College Educated into the Center of Large American Cities” by Lenahan O’Connell, Wie Yusuf, Timothy Brock, and Benjamin Blandford. The chapter was published in ‘Building a Sustainable Transportation Infrastructure for Long-term Economic Growth’, edited by Olga Smirnova.

Wie Yusuf – Old Dominion University
Wie Yusuf is Associate Professor in the School of Public Service at Old Dominion University, Norfolk, Virginia. Her research focuses on issues at the intersection of government, nonprofits, business, and society, with particular focus on policies related to transportation, public finance, and climate change and sea level rise. She is co-editor of Capital Management and Budgeting in the Public Sector, forthcoming in 2019, which focuses on systematic capital management and budgeting practices by governments in different countries.

We cannot build our way out of inequality