Last week President Trump delivered his second State of the Union address to a joint session of Congress. As in previous addresses, Trump invited a number of Americans that he characterized as ‘heroes’ and ‘victims’. Patrick A. Stewart argues that Trump’s choice to spotlight mostly white men as ‘heroes’ and women and African Americans as ‘victims’ in his State of the Union guest list shows how his administration views gender and ethnicity in America more widely.

Ever since President Reagan invited Air Florida Flight 90 rescuer, Lenny Skutnik, to his 1982 State of the Union address, it has been the tradition that the President will have important outsiders present at what is supposed to be the chief executive’s signature annual policy address.

While many expected US President Donald Trump to use the guests of his State of the Union address to bolster his positions, his 2019 acknowledged guest list went well beyond the norm. Trump’s fifteen guests nearly matched the previous all-time high of sixteen, seen at his 2018 State of the Union address; indeed, it doubled down on Obama and Clinton’s prior pinnacle of eight acknowledged guests (Figure 1).

Some might attribute this number to Trump’s populist fervor or as his way of reaching out to the America he represents. Indeed, this is likely true; the characteristics of those guests he chose to portray as heroes and victims likely reveal Trump’s worldview. Although early morning Tweets might reveal an impulsive personality, Trump’s selection of which ordinary Americans that did or experienced extraordinary things to highlight during a nationally televised event is systematic and intentional. 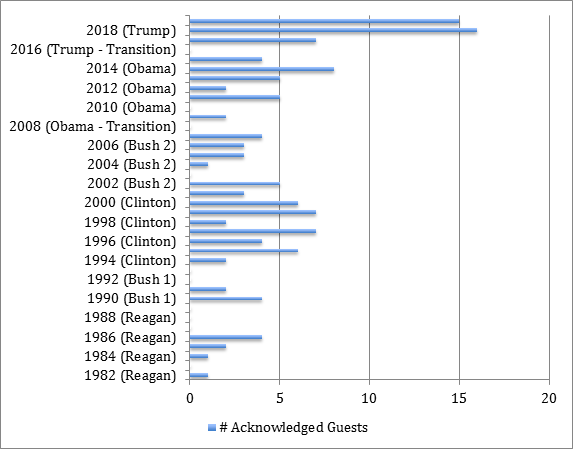 The stories told through guests acknowledged during the State of the Union highlight visually the human drama of government action – and inaction. The visual and vocal elements often overwhelm the impact of verbal statements; more to the point, viewers observing audience members acknowledged as part of a well-constructed narrative may lead to viewers bypassing more critical and systematic analysis of arguments accepting what the audience observably supports.

Trump’s trio of World War II veterans illustrated the “Greatest Generation’s” role as savior of the free world and protector of the Jewish people, respectively, served as both an introduction and conclusion to his address. Trump’s focus on paroled ex-prisoners nodded towards bipartisan cooperation while asserting his presidential role as benevolent redeemer. Trump’s recounting the violent end to two octogenarians, and the loss suffered by three generations of kin laid blame as “our Nation failed to control its very dangerous border,” even as his special agents fight against international sex trafficking. 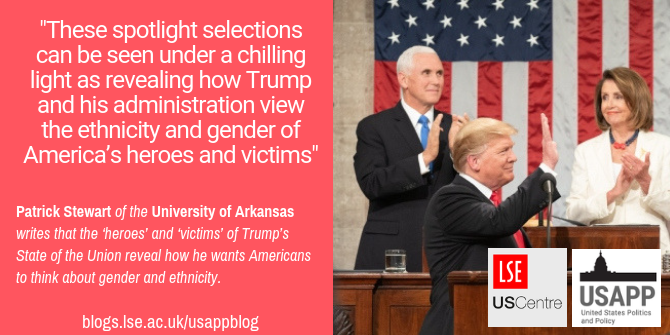 “2019 State of the Union” by The White House is Public Domain.

At the same time, these spotlight selections can be seen under a chilling light as revealing how Trump and his administration view the ethnicity and gender of America’s heroes and victims. More importantly, it shows how it wishes the rest of America to see these groups.

The guests at Trump’s State of the Union were nearly all white males serving in the military or law enforcement (see Table 1). When a white male was shown as a victim, it was as a father of an enlisted serviceman who gave his life for his country. The sole exception to this ethnic coding was Elvin Hernandez, who like Celestino Martinez in the 2018 State of the Union, represented Latino males defending the border from other Latinos.

The victims in the stories told by Trump were overwhelmingly minority or female. The African-Americans were drug criminals receiving clemency from Trump and his administration. The Jewish-American guests were victims saved by US military and law enforcement and referred to in the same breath as threats to Israel from Iran.

All the female guests acknowledged by Trump were presented as victims. They were either victims of an un-built border wall that let illegal immigrant gang members into the heart of America to wreak havoc, victims of an unfair criminal justice system, or victims of childhood disease threatening to cut short a promising life. In turn, their inability to control their circumstances was underscored by their tears as wrought through masterful rhetoric.

The delay of Donald Trump’s State of the Union address by the historically long Federal government shutdown underscores how this speech is no longer about national and government performance but now serves as a bully pulpit for policy intent. Not one mention was made by Trump of perhaps the most debilitating work stoppage in federal government history in this, at over 80 minutes, the third longest address ever. Instead, the focus was on telling stories with American citizens used as narrative props to what might likely be perceived as more a partisan rally than an event serving all the country equally. Perhaps it is time to follow the lead of the US republic’s Founders and rely on written statements instead of media events.

Patrick Stewart – University of Arkansas
Patrick A Stewart is an Associate Professor in the J. William Fulbright College of Arts & Sciences at the University of Arkansas. He is a certified Facial Action Coding System (FACS) coder whose current research concentrates on the emotional response of followers to leaders and those wishing to become leaders. He is researching audience applause, laughter, and booing in response to comments by candidates during presidential debates and how individuals respond to different types of facial displays and other types of nonverbal behavior by politicians.