Yes, President Trump can use a national emergency to build a Wall – Congress gave him permission four decades ago

Yes, President Trump can use a national emergency to build a Wall – Congress gave him permission four decades ago

Last month, President Trump declared a national emergency in order to build more barriers on the US southern border with Mexico. While many have condemned the President’s move – and Congress has voted to overturn the declaration – Eric Svensen argues that Trump is well within his rights to act in this way. The President, he writes, is using authority given to him by Congress as part of the 1976 National Emergencies Act. This authority should be seen as part of an evolving trend for Congress to delegate national security matters to the presidency.

The recent controversy surrounding President Donald Trump’s emergency declaration to build additional fencing along the southern border of the United States presents an opportunity to explore the legal and constitutional justification of a power that, quite frankly, few realized existed. Most citizens, both in the electorate and public office, understand that the purpose of the separation of powers is to divide power equally between the three branches of government (Executive, Legislative and Judicial) to protect against likely abuses in authority that can arise when powers are combined under one branch. The key to a successful separation of powers arrangement, of course, is that each branch is protected from possible encroachments since the Constitution provides significant checks that promote balance. How, then, can a president claim authority that seems to violate this principle (in this case Trump claiming the right to spending powers that are expressly given to Congress)? The answer to this question comes in two parts: political practice and constitutional structure.

Over the past century, Congress has continued to cede authority to the president in foreign affairs and national defense. For example, not only have most legislators remained silent on presidential uses of force around the globe (presidents often exercise these powers without consulting Congress or the public), but lawmakers have also aided presidential ambition by giving chief executives unlimited funds to realize their foreign policy aspirations. Moreover, while Congress sometimes fights back against the president in foreign policy, the Supreme Court, more often than not, has proven to be an unwilling ally of Congress since it tends to side with the chief executive or avoid these matters entirely. As a consequence, some argue that if Congress wants to take a blind eye to the near monopoly presidents now exercise in foreign policy it seems hypocritical to ask the Court the save legislators from the realities they created. The Court, in other words, does not exist to protect Congress from itself if lawmakers continually delegate broad authority to the president.

One instance of Congress granting broad authority to the president is the wide latitude lawmakers have delegated to the White House to declare emergencies. Since the ratification of the Constitution, presidents have claimed prerogative authority to declare emergencies. With the support of Congress, lawmakers have enacted various laws, both permanent and temporary, to give the chief executive the necessary tools to address military, economic, and labor issues—either before-the-fact or retrospectively. Despite countless emergencies issued by such presidents as Washington, Lincoln, Wilson, Roosevelt, and others, by the early 1970s the Senate issued a report on presidential uses of emergency power which questioned the authority of presidents to initiate emergencies indefinitely. Yet, if lawmakers were so concerned about national emergencies lasting decades, why did they allow this practice to continue as long as they did?

The reason presidents seem to get their way on matters of national security is that even though the separation of powers divides power between the three branches of government each branch is given unique characteristics that give it advantages in certain policy areas. That is, while most understand that the purpose of the Constitution is to limit government power and protect individual rights, its underlying goal is to also make effective governance a reality by securing three core governmental objectives: popular will, the protection of individual rights, and self-preservation. Though each branch is equipped to secure all of these objectives, each branch is also structured in a way that entices it to place a higher priority on certain objectives over others. 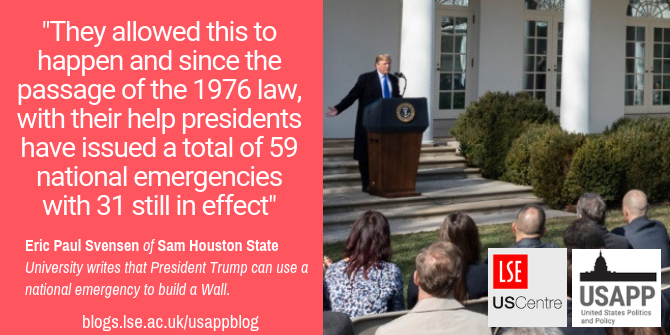 “President Trump Delivers Remarks in the Rose Garden” by The White House is Public Domain.

For example, because Congress is a dense political institution with multiple members that operates under various rules and procedures, it often places concerns over popular will as its highest priority. This is why Congress is often slow to move a bill through the legislative process since each piece of legislation has to meet the parochial demands of constituents and key interest groups. The president, in contrast, is best equipped to address concerns that need not only immediate attention but also require secrecy. This is why presidents often place a higher priority on matters of national security and defense. Of course, this is not to say that presidents are never concerned with popular will and individual rights or that Congress ignores national defense. Rather, each branch has natural advantages over certain policy areas and often centers much of its attention on these concerns. As a consequence, it should be little surprise that since World War II presidents have been more successful on scoring legislative wins on foreign policy and national defense than domestic legislation.

Returning to the Wall, since Trump issued his emergency the blogosphere has erupted with calls of support and condemnation. One law that has received particular attention is the National Emergencies Act of 1976. Opponents argue that the act provides Congress with the authority to halt presidential emergencies. This is correct. And while this week the House (and likely the Senate) have indeed voted down Trump’s national emergency, neither body had the two thirds majority needed to overcome a presidential veto.

The fact remains, however, that though the law was passed as a response to numerous emergency instruments that were still in effect decades after their initial declaration, it does grant presidents wide sweeping authority to declare national emergencies that could trigger, according to the Brennan Center for Justice at New York University, 123 statutory powers that allow the president to act unilaterally. Two in particular provide Trump with all the ammunition he needs to build his wall: 10 U.S.C. § 2808 (a) which states that the “Secretary of Defense, without regard to any other provision of law, may undertake military construction projects . . .” that are necessary to support the armed forces and 33 U.S.C. § 2293 which allows the Secretary of the Army to terminate or defer civil works projects to those that are essential to national defense.

In the end, while Democrats continue to fume over this particular emergency, their arguments rest on a shaky foundation. As long as the authority to declare emergencies are embedded in statute and those unilateral actions taken by the president do not fundamentally alter power in the constitutional order or violate individual rights of citizens, lawmakers should not complain. They allowed this to happen and since the passage of the 1976 law, with their help presidents have issued a total of 59 national emergencies with 31 still in effect. Similar to Dr. Frankenstein’s monster turning on its master, few are likely to lament when one’s unholy abomination acts in a manner its creator never envisioned. Yes, President Trump can declare an emergency to build a wall because Congress said he can.