While most eyes are on the unfolding Democratic 2020 president primary, there have also been recent stirrings of primary challenges for the incumbent president from various wings of the Republican Party. Wayne Steger looks at the history of presidential primary challenges for incumbents, and reminds us that since 1884 every attempted challenge to a president’s renomination has failed. While a primary challenge from President Trump’s own party is very unlikely to succeed, he writes, the amount of support any alternative candidate gains next year will tell us a great deal about the president’s chances for reelection.

President Donald Trump faces growing opposition to a second term. In addition to energetic Democratic opposition, Trump faces a new threat to his reelection from his own political party. So far, two Republicans have declared their intention to challenge Trump’s renomination in 2020. These challenges are largely symbolic, but they serve as a useful barometer of the president’s prospects for four more years in office.

My previous systematic study of presidential renomination challenges finds that presidents face challenges under two general conditions. The more critical of the two conditions is that the president’s political party has serious internal factional divisions. That certainly applies to the Republican Party which has divided into ideological factions and, this decade, a more important split between regular or establishment Republicans who prioritize a pro-business agenda (less regulation, lower taxes, and less spending on social welfare) and a more radicalized faction that is uncompromising but not clearly defined ideologically. Such a factional division is a necessary but not sufficient condition for candidate to challenge an incumbent president’s a renomination. The other condition is that a president is unpopular, though what matters in this regard is the president’s popularity with the factions of his own political party. Trump is unpopular with Democrats and independent voters, but he retains remarkably durable and strong support from Republicans and independent voters who lean Republican. 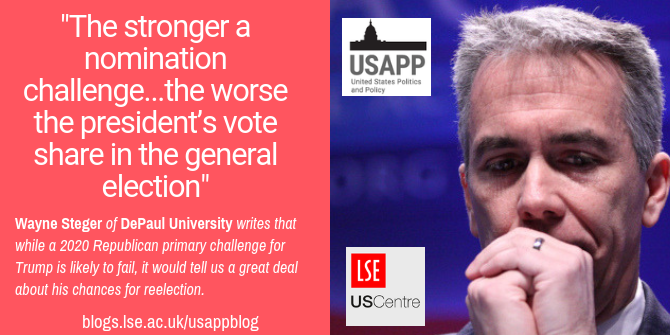 “Joe Walsh” by Gage Skidmore is licensed under CC BY SA 2.0

President Lyndon Johnson illustrated the scenario in 1968. By that time, the emergent “new left” of the Democratic Party strongly opposed US involvement in the Vietnam War. Johnson also faced declining support from conservative, white Southern Democrats who opposed his civil rights agenda. Further, Johnson’s presidential approval ratings had dropped to 43 to 44 percent by 1967, a level similar to President Trump’s approval ratings now (though Johnson’s varied more due to less polarized political parties of the 1960s). Rather than face the prospect of defeat, Johnson opted to not seek renomination and reelection.

President Jimmy Carter is an example of when a president sought renomination against a strong challenger. As a fiscally conservative, Southern Democrat, Carter was out of touch with the dominant, progressive faction of his party. Carter was associated with what was by then a minority faction of his own political party. Carter was even less popular than Lyndon Johnson—though critically, his approval ratings rebounded significantly in the fall of 1979 through early 1980 when a nomination challenge must build support. Despite his unpopularity with his own party, Carter won renomination as the Democratic presidential candidate in 1980, showing that it is very hard, if not impossible, to defeat an incumbent president seeking renomination.

Former Massachusetts Governor Bill Weld has been running since April but has not gained appreciable ground. Weld is identified with the Libertarian wing of the Republican Party—an economically conservative but socially moderate faction of Republicans who are relatively open to compromise with the Democrats. This wing of the party, once dominant, is now too small to nominate a Republican presidential candidate. Weld’s candidacy is a symbolic option that will enable “moderate” Republicans to express their dissatisfaction with Trump and the direction of the Republican Party. A strong showing by Weld in the caucuses and primaries, drawing say eight or nine percent of the vote, would be a sign that these more moderate Republicans may be willing to stay on the sidelines or even to defect to the Democrats in the general election.

Former Congressman Joe Walsh also entered the race this month. Walsh is a former flame-throwing member of the Tea Party faction of the Republican Party in Congress. As a member of Congress, Walsh was most known for his ability to get on TV with highly provocative statements. After being defeated in 2012, Walsh became a conservative talk radio host known for his rigid, no compromise stances on a variety of issues. While Walsh also is not likely to win, he poses a more serious threat to Trump’s renomination because he appeals directly to Trump’s base within the Republican Party. If Walsh succeeds in drawing support in national polls, then it will be a strong sign that Trump’s hold on Republican Party loyalties is fading.

That Republicans are entering the race to challenge Trump’s renomination is telling. It is indicative of continued divisions within the Republican Party coalition and a rising degree of dissatisfaction with Trump among party elites. How much support these candidates’ challenges attract will be indicative of Trump’s chances for reelection. The stronger a nomination challenge, in terms of support for an alternate candidate, the worse the president’s vote share in the general election. These renomination challenges thus serve a symbolic purpose, but that is meaningful as an indicator of the president’s prospects for reelection.