Elections in the US are skewed: twice in the last twenty years, the winner of the popular vote in a presidential election has lost the Electoral College vote. Steven Mulroy argues that only by adopting Proportional Representation can the US overcome current electoral challenges like gerrymandering and the “Big Sort”. He writes that countries such as Australia have successfully instituted systems such as the Single Transferable Vote and now see far more proportional elections, and that the US could do the same very easily, starting at the state level.

The presidential candidacy of former Starbucks CEO Howard Schultz has once again stoked fears of a candidate splitting the anti-incumbent vote splitting the anti-incumbent vote  and handing the presidency to a candidate not supported by a majority.  This would be the second US presidential election in a row in which the nationwide majority will was thwarted, since Hillary Clinton won three million more votes nationwide than Donald Trump, yet still lost the Electoral College.  Meanwhile, the US Supreme Court has taken two recent cases which only underscore the extent to which partisan gerrymandering routinely warps US electoral outcomes.

The common thread in all these narratives is a fundamental flaw in the US electoral system, a flaw shared by many systems around the world.  When you carve up the electorate into arbitrary subunits—states for presidential and Senate elections, districts in House elections–and hold ‘winner-take-all’ elections within each, you create the potential and likelihood for the vote to be skewed—for electoral outcomes that defy majority preference, or otherwise skew from an accurate reflection of popular will.   The common solution is to get rid of (or at least minimize) single-member districts and the winner-take-all paradigm, and move to Proportional Representation through adoption of Ranked Choice Voting.

US elections are skewed

This voting ‘skew’ is most obvious with Senate and presidential elections.  Each state gets two US Senators, regardless of population.  Thus, a Wyoming resident’s vote counts 60 times more than a Californian’s, since California has 60 times the population of Wyoming  yet still has the same representation. This bolsters the influence of sparsely populated rural states, . skewing the Senate rightward.

A lesser version of this dynamic occurs with presidential elections, where each state gets a number of Electoral College votes equal to its number of House members (based on population) and Senate members (not based on population, as seen above).  This again over represents lower-population states.  Since almost all States award their Electors on a winner-take-all basis  to the candidate that wins a state, a candidate with more nationwide votes can nonetheless ‘waste’ lots of votes by running up lopsided victories in a few states, netting fewer Electoral votes than a candidate who racks up narrow victories in more States.  This allows the nationwide ‘loser’ to still win the White House, as has happened five times in US history.

But this ‘skew’ extends beyond state-based vote allocations to all single-member districts (SMDs).  Carve a state, county, or city up into SMDs, and you are bound to have a disconnect between the percentage of the vote netted by a political party (or racial minority, or any politically cohesive group) and the percentage of legislative seats that party wins.  Often this is due to intentional gerrymandering by the party temporarily in power at redistricting time, after the Census which runs every ten years.

Election reformers frequently call for stricter court policing of such gerrymanders, or the adoption of nonpartisan redistricting commissions to draw district lines.  These are both good ideas; indeed, the US is the only industrialized democracy that still allows incumbent legislators to draw their own district lines come redistricting time. 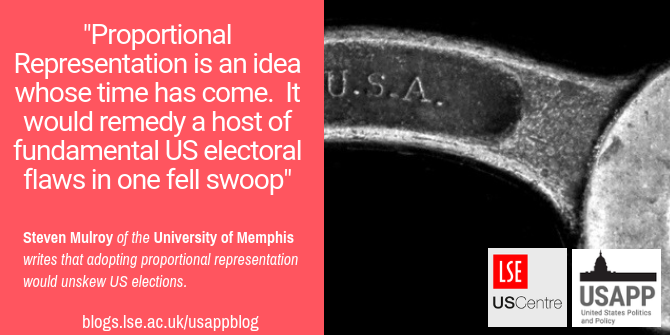 Photo by Matt Artz on Unsplash

But these sensible reforms won’t completely solve the problem, because of the phenomenon of “demographic clustering,” also called “the Big Sort.”  Voters do not settle down neatly in perfectly mixed ratios of Democrats to Republicans.  Democrats tend to over-concentrate in urban areas, while Republicans disproportionately live in suburban and rural areas.  Draw contiguous, relatively compact districts over such populations, and you will naturally over-represent one party or another.  While this “Big Sort” has been most pronounced in the US in the last few decades, a similar phenomenon can be seen in other nations as well.   Indeed, such a geographic/demographic “skew” is inherent in any winner-take-all system using SMDs.

Proportional Representation can unskew US elections

Many nations get PR by using a ‘party-list’ system, a parliamentary system in which voters vote for parties, not candidates; parties are awarded a number of seats based on their proportional share of the nationwide vote; and party leaders fill the seats their party has won from an internally pre—approved list of potential party candidates.   Americans, by contrast, are used to voting for people, not parties, and choosing party nominees through primary election.

A better fit for America is the Single Transferable Vote (STV), a method of achieving Proportional Representation through Ranked Choice Voting (RCV), where voters rank their 1st, 2nd, and 3rd choices rather than just voting for one candidate.  STV has been used to elect the Australian Senate for over 70 years.  In America, it has been used successfully for decades in  Cambridge, Massachussetts, and for years in Minneapolis, Minnesota.

STV works when there are multiple legislative seats to be filled in a single election.  It takes place either in an at-large election or one from a multimember district.  It sets a minimum quota of votes needed to win a seat, based on the number of seats up for election.  In a 5-seat election, for example, the quota would be 1/6, or about 17 percent of the vote. Any candidate reaching the quota wins a seat.  Any ‘surplus’ votes for that candidate over and above the quota are then redistributed among remaining candidates based on the 2nd choices of the ballots for that winning candidate.  If any other candidate now meets the quota, she is seated. Otherwise, the candidate with the fewest votes is eliminated, and the ballots for that eliminated candidate are redistributed among remaining candidates based on 2nd choice votes.  This process of redistributing ‘surplus’ votes of winning candidates, and all the votes of lowest-rung eliminated candidates, continues, drawing on voters’ 2nd and 3rd-place choices as necessary, until all the seats are filled.

STV has proven over time to provide roughly proportional results.  A politically cohesive group that nets, say, 30 percent of the vote, will end up with something close to 30 percent of the seats.   Australia is a natural experiment proving this case.  Since 1949, it has used single member districts for its federal House and STV for its Senate.   Senate elections are consistently more proportional in outcome, with better representation for third parties, and no ‘majority party loses’ anomalies (which have occurred twice in recent decades in the House).  Such differences can be seen in recent Australian elections, too.

This has numerous advantages.  It ensures that the majority preference is respected, while also ensuring that significant minorities are not completely shut out.  Instead of ‘winner-take-all,’ it’s “majority take most, minority take its fair share.”  It eliminates or minimizes the inevitable gerrymandering inherent in SMDs by eliminating or minimizing the drawing of districts.  Thus, it would permanently and decisively end the anomalous election results as we have seen in recent US presidential elections.

But STV has yet further advantages over our current system.  In almost every at-large or SMD general election, the outcome is a foregone conclusion, because the jurisdiction or SMD tilts heavily toward one party or another.  Elections are not competitive, which depresses turnout.  In partisan elections, the only real competition is in the primaries, which pushes candidates to the extremes of left and right and discourages across-the-aisle compromise. In contrast, STV makes elections more competitive, spurring participation.  The ranking system tends to elect consensus candidates with broad-based support.  Ranking also encourages cooperative campaigning:  a candidate wants to be the 1st choice of her own base, but also the 2nd choice of her rivals’ bases. So she won’t risk alienating voters with mudslinging attacks. Instead, she will respectfully ask to be the 2nd choice of her rival’s base.  This has been the experience where RCV has been used in the US

The good news for PR proponents is that it would not take a federal constitutional amendment to adopt it.  Each state legislature has the authority to adopt it for state, local, and federal elections within its borders.  Congress could adopt it nationwide.  Indeed, pending in Congress is the Fair Representation Act, which would provide for STV elections for the US House.

Whether at the federal, state, or local level, Proportional Representation is an idea whose time has come.  It would remedy a host of fundamental US electoral flaws in one fell swoop.

Steven Mulroy – University of Memphis
Steven J. Mulroy is a Professor of Law at the University of Memphis.  A former litigator for the Voting Section of the U.S. Justice Department, he has authored numerous scholarly articles on voting rights.  As a law professor, Professor Mulroy has participated in the litigation of over a dozen cutting-edge cases in areas which inform his scholarship, including the challenge to the Palm Beach County, Florida “butterfly ballot” in the 2000 presidential election; the first-ever federal court injunction against a state senate’s ongoing internal election recount proceedings; and the first federal case imposing “cumulative voting” as a non-district remedy for minority vote dilution under the Voting Rights Act.