Nearly 50 years on, Title IX’s implementation means that student athletes are aware of and want to tackle gender inequalities in athletic opportunities

Nearly 50 years on, Title IX’s implementation means that student athletes are aware of and want to tackle gender inequalities in athletic opportunities

In 1972, the US Congress passed Title IX  to address sex discrimination in educational institutions receiving federal aid. Four decades on, Elizabeth A. Sharrow, James N. Druckman and Jacob E. Rothschild take a close look at current perceptions of how Title IX has been implemented, with a specific focus on its effects on college athletes. They find that not only are student athletes aware that there should be gender equity – and in fact recognize existing inequities – they are also willing to take action to promote more equitable practices by universities.

One of the most celebrated public policies in the United States is Title IX of the Education Amendments of 1972. This federal-level policy dramatically altered American educational institutions, most notably in the ways that it requires equitable athletic opportunities for girls and women in interscholastic and intercollegiate competition. Today, these opportunities are now available to twelve times as many women competing at the college level than existed before 1972, and one of every two American girls plays sports in high school. Many studies demonstrate that those who benefit from Title IX have higher labor force participation rates than non-athletes, are more physically active later in life, and exhibit greater independence in adulthood.  For these and other reasons, it is therefore understandable that public perception and media coverage frame Title IX’s implementation in athletics as a significant policy success.  Yet, are those who most directly benefit from policy fully satisfied with the current status of implementation? We know strikingly little about whether college athletes–across sports and around the country—continue to care about sex inequity, let alone whether they care enough to take action on the issue.

In our study, we surveyed over 1,600 current college athletes in the Big Ten Conference, one of the most notable NCAA Division I college athletic conferences.  We focused on athlete opinion regarding the sex equity practices of college athletics and their propensity toward political mobilization in response to such inequities.  We investigated three issues: 1) perceptions about the actual distribution of resources and opportunities across women’s and men’s teams, 2) opinions about how resources and opportunities should be distributed between men and women in their home athletic departments, and 3) judgments regarding the likelihood of respondents to take action if or when they observe biased treatment.

We found evidence that student-athletes believe there should equity between women and men, recognize existing inequities in the status quo, and are willing to take action to promote more equitable practices by their universities.

Interestingly, virtually all student-athletes, regardless of their gender, endorsed the norm of equality. On the other hand, perceptions of differential treatment of women and higher likelihood for taking action were most pronounced among women athletes and men who recognized the persistence of sex discrimination in American society. (These male athletes might be thought of as “allies” to the cause of Title IX which primarily worked to end the exclusion of women and girls from sports.) Such allies, like their contemporaries in professional sports, appear poised to actively confound the myth that sports are apolitical. Among women athletes and their allies, the stereotypes of comparative disengagement (vis-à-vis other college students) need updating. 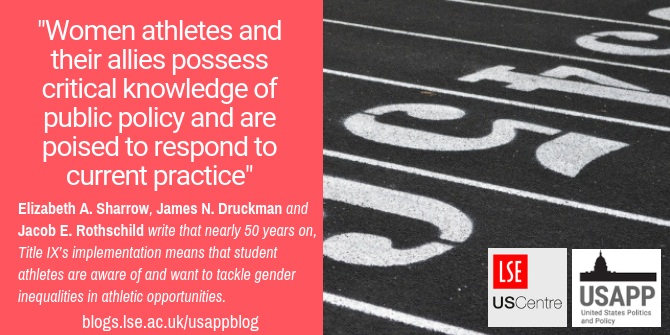 Photo by Andrew McElroy on Unsplash

Our findings are quite robust and comprehensive. We measured and analyzed attitudes and perceptions with 24 items employed by the US federal government to assess sex equity practices of athletic departments under both Title IX and the Equity in Athletics Disclosure Act (EADA).  These items include assessment of athletic scholarship availability, participation opportunities, coaching, recruiting, and more (full details regarding all survey questions can be found in the study appendix).  For each, respondents were directed to reflect on how their home university, across all sports, actually distributes resources between women and men; as well as how respondents think those resources should be distributed. Respondents then reported their likelihood of taking political action to express their opinions about sex equity in sports (through writing letters, talking with coaches or athletic administration, signing a petition, or participating in a protest).

The perception of inequality, particularly among women and their allies is based in some objective realities. Indeed, as a result of the profit-seeking measures pursued by athletic departments, sex-based imbalances in resource allocation and athletic opportunity persist in contemporary college athletics (this, according to the annual EADA reports to the US Department of Education which are detailed in the study appendix for the Big Ten schools). Title IX does not require strict equality in spending, and it therefore does not foreclose investment by athletic departments in their financial and economic interests.  We found that women athletes and their allies are conscious of these unequal distributions and would prefer to see equal treatment, where neither sex is more or less advantaged than the other. Further statistical analyses suggest that student-athletes’ beliefs about how resources should be distributed are largely in agreement with policy guidelines—even in favor of greater redistribution of resources toward women athletes than exists in the status quo.

These results suggest that many women athletes and their allies possess critical knowledge of public policy and are poised to respond to current practice. Their awareness presents an emerging challenge to the economic model of college sports which dominates at the NCAA Division I level. Title IX’s equity imperative, with its equal opportunities and scholarship requirements as well as its protections from abjectly imbalanced treatment, means that women athletes and their allies have robust, federal-level backing in US civil rights policy with which to challenge the economic model for college sports if or when they so choose.  Title IX clearly led to policy impacts worth celebrating, but its implementation is far from complete.

Our finding that many beneficiaries note inequities and are poised to demand change is particularly noteworthy given that women athletes and their allies now outnumber the empowered leadership who determine the financial order of the status quo. Our research suggests that Title IX, in its ongoing implementation and through its federally-protected rights, has already planted the seeds for activism which could engender a different future for college sports.

Elizabeth Sharrow – University of Massachusetts Amherst
Elizabeth Sharrow (Ph.D., M.P.P.) is Assistant Professor of Political Science and History at the University of Massachusetts Amherst. Her research explores the politics of Title IX and gender in the United States and has been published in Public Opinion Quarterly; Politics, Groups, and Identities; Political Behavior; and American Politics Research, among other venues.