This week the United States Supreme Court determined that reviewing partisan gerrymandering cases was outside the remit of federal courts. Alex Keena, Michael Latner, Anthony J. McGann and Charles Anthony Smith argue that in failing to recognize the vote dilution caused by gerrymandering, as well as connecting the majority rule standard to the Fourteenth Amendment, the decision removes Americans’ fundamental right to participate equally in the political process.

The Supreme Court’s 5-4 decision in Rucho v. Common Cause that partisan gerrymandering claims present questions beyond the reach of the federal courts may signal the first time in the nation’s history that a majority of Justices have surrendered our most fundamental of constitutional rights, the right to participate equally in the political process, because “it has searched high and low and cannot find a workable legal standard to apply” in the dissenting words of Justice Elena Kagan.

Many scholars of election law and redistricting saw that it might play out this way. The majority decision, written by Chief Justice John Roberts, lays bare two crucial errors that we dedicated several chapters to in our book on Congressional redistricting and the courts, Gerrymandering in America. First, the majority failed to recognize the nature of vote dilution as it relates to partisan gerrymandering. Second, and as a result of the first error, the majority held fast to the false intuition that available standards and metrics, including responsiveness, asymmetry and proportional representation, are political or arbitrary rather than grounded in Constitutional protections. We cannot discern whether these serious errors by the Chief Justice were made because of an inability to comprehend the social science or a more deliberate path of willful ignorance.

The Rucho majority’s framing reflects the influence of the late Justice Antonin Scalia, who passed away in February of 2016, and clearly shaped their views on this matter. As a result, we have a decision straight out of The Federalist Society: a veneer of judicial restraint that masks an extraordinary and unprecedented exercise of political power from the least accountable branch of the Federal government. That being the case, we agree with the majority that citizens can (and must now) mobilize to enact reforms that our research shows can help compensate for the Court’s negligence.

The long reach from Scalia’s grave

In the last major partisan gerrymandering case,  Vieth v Jubelirer (2004) Justice Scalia (writing for the plurality) claimed that, unlike the “one-person, one-vote” standard in reapportionment cases, a majority rule standard (a majority of persons must elect a majority of legislators) could not be derived from any “constitutionally discoverable” right, because majority rule claims pertain to groups, not persons. The standard “rests upon the principle that groups (or at least political-action groups) have a right to proportional representation. But the Constitution contains no such principle.” 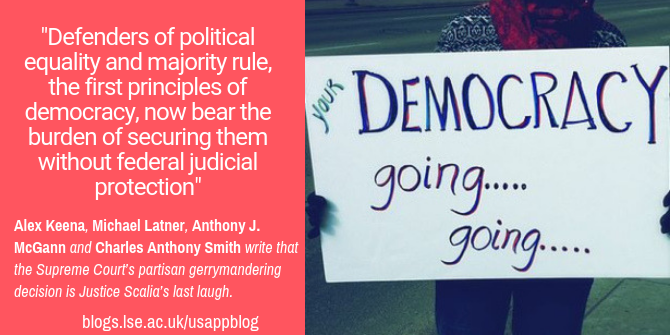 Chief Justice Roberts picked up right where Scalia left off: “Partisan gerrymandering claims invariably sound in a desire for proportional representation.” Roberts then declares that such claims reflect “a ‘norm that does not exist’ in our electoral system” and that “The Founders certainly did not think that proportional representation was required.” In Gerrymandering in America, we demonstrate that Justice Scalia and now Chief Justice Roberts, was and are incorrect to argue that a majority rule standard can only be derived from a claim to group rights and proportional representation. We show that the equal treatment of individual voters logically implies the majority rule standard.

Chief Justice Roberts fails to see the equivalence between the one-person, one-vote rule and majority rule. On the one hand he acknowledges that vote dilution “refers to the idea that each vote must carry equal weight” and that the rule is “relatively easy to administer as a matter of math” for apportionment cases by requiring approximately equally populated districts. On the other hand, he claims that “It hardly follows from the principle that each person must have an equal say in the election of representatives that a person is entitled to have his political party achieve representation in some way commensurate to its share of statewide support.”

But it does. There is no way for equally weighted votes to produce the outcomes, including minority rule, that we frequently get from partisan gerrymanders. And while the intent of malapportionment or racial gerrymandering may differ from partisan gerrymandering, they all work through the same effect: vote dilution. Vote dilution, by whatever method or reason, can reach a point where it violates majority rule. And if the majority rule principle is derived from individual rights of equal protection, which it is, it is protected under the 14th Amendment. Not as a matter of political motivation, or precedent, but as a matter of math. This is a principle that the Founders, especially James Madison, understood. It is why seats in the House of Representatives are supposed to be allocated proportionally using the Census. But that’s another story.

The road to democratic restoration

Defenders of political equality and majority rule, the first principles of democracy, now bear the burden of securing them without federal judicial protection. In the states, grassroots organizing to legislate independent redistricting commissions, as well as multi-district, and yes, more proportional districting plans, can reduce partisan bias. And as the Rucho majority noted, several Congressional bills (the For the People Act, the Fair Representation Act) have provisions that could radically improve electoral representation. The time has come to take action.