This year, state legislatures across the country are creating new maps for congressional and state legislative elections. Michael Latner, Alex Keena, Anthony McGann and Charles Anthony Smith give an overview of the current redistricting, writing that gerrymandering is often still the outcome where lawmakers are responsible for the process. They also draw attention to the increased role of technology in allowing the public and nonprofit groups to be part of the redistricting process.

Following the release of the results of the 2020 US census, this year many state and local governments are redrawing maps for congressional and state legislative districts. It is too early to estimate how biased representation in the US House of Representatives and state legislatures will be because of the peculiar way that redistricting is conducted every decade. The Republican Party is fully in control of the process in 19 states, compared to eight states under unified Democratic control. Republicans could dominate the process as they did in 2011, but 2021 is a somewhat different political landscape. A handful of states (Indiana, Maine, Nebraska, Oregon, Texas, and West Virginia) have finalized maps, but at least two of these are already subject to litigation. Below we take stock of what has, and hasn’t, changed and draw some lessons from the process as it continues to unfold.

In states where elected politicians are responsible for drawing maps, they are either gerrymandering themselves into entrenched power or otherwise failing to follow fair districting practices. In Texas, for example, Republican legislators padded their already gerrymandered Congressional and state legislative maps. Given that people of color made up 95 percent of the growth that led to Texas receiving two additional Congressional seats, it is disappointing but not surprising that state Republicans acted to protect incumbents rather than ensure the new residents were represented. In North Carolina, Republicans look prepared to reinstall a level of bias that was ruled unconstitutional just a few years ago, with one map that provides an 11 Republican -3 Democrat advantage in a battleground state. Other submitted maps are more competitive, but dragging bad maps through the courts for years seems to be an increasingly viable strategy for the GOP. In the end, they get their way throughout the period of litigation, and then courts often use the bad maps as a starting point.

In Oregon, where Democratic legislators are in control, the new Congressional map is not biased, but it is highly responsive, which is likely to yield a disproportional outcome, as high as 5 Democrat -1 Republican in a state that President Joe Biden won by 56 percent. In New York state, unified Democratic control and an at risk narrow Democratic majority in the House will combine to tempt the state party to scrap plans from a bipartisan commission. The national Democratic Party has a great deal of incentive to push for a Democratic Congressional gerrymander in New York as a way of countering GOP gerrymanders in other states. Not surprisingly, the state commission’s Democrats and Republicans could not agree on a proposal, so both parties proposed their own maps.

In our new book, Gerrymandering the States, we demonstrate that partisan and advisory commissions do not have the same capacity to reduce gerrymandering as truly independent commissions (those which bar politicians from drawing the maps). As in New York, this year we are seeing more partisans overwrite or ignore bipartisan redistricting requirements where they can. In Ohio, a party-line vote resulted in the Republican majority enacting maps that violate their commissions’ partisan fairness and proportionality requirements, which will require that they redraw maps in four years (unless courts throw out the enacted maps). In Virginia, the first state to advance a redistricting commission through the legislative process, negotiations collapsed between the two parties after one month. That the commission has failed in approving state legislative and congressional plans is largely due to the structure of the commission, which includes an equal number of Republicans and Democrats, and gives the state legislators equal representation with citizens on the commission. The Virginia Supreme Court will likely complete the task now. 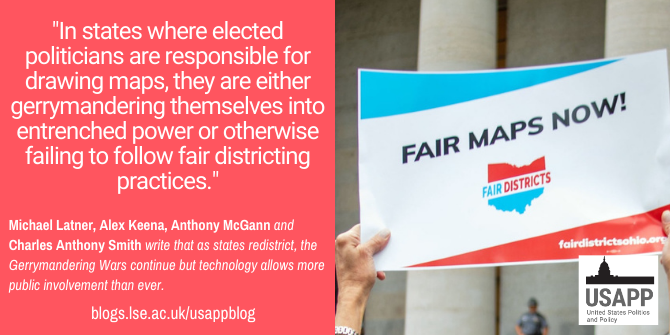 Independent redistricting commissions appear to be working better, and less favorably for incumbents of both parties. In Colorado, months of public deliberation and voting yielded a fair commission plan that sets up both parties with an even number of seats and one additional toss-up seat. Neither the Arizona nor California commissions have finalized maps, but both look like they could shake up several incumbent seats. In Arizona, both the 1st and 6th districts may be considerably restructured, and with California losing a Congressional seat for the first time ever, many more districts will be reconfigured.

Some things do change

While much of the gerrymandering in America looks the same as 2011, a lot has also changed. For one, the magnitude of gerrymandering was such in 2011 that many states have basically maxed out their advantage, especially for Congressional districting. We are likely to see more attempts to maximize advantage in state legislatures, especially in states without their own free and fair elections clauses, since the Supreme Court has refused to recognize federal constitutional constraints on partisan gerrymandering.

Additionally, battleground states like Michigan (which passed its own redistricting commission initiative), Pennsylvania and Wisconsin are no longer under unified party control, significantly reducing the capacity of their gerrymandered state legislatures to keep themselves entrenched. But perhaps the most important change since 2011 is the democratization of technology and information, allowing the public to be part of the redistricting process, at least informally. Non-profit voting rights and voter mobilization groups across the country are using public mapping tools and data to lower barriers to map making and testing proposed maps for bias. Thousands of maps for districts and communities of interests have been proposed across the country, which could have an impact on representation from the Congressional to the local level.

Whether these efforts will be enough to prevent gerrymandering from determining the outcome of the 2022 House elections or prevent entrenched state legislatures from seizing control over presidential election outcomes in 2024, is, as yet, impossible to say. Voter turnout in 2022 is likely to be decisive either way. And whatever the outcome of this redistricting cycle, without federal electoral integrity protections, electoral democracy in the United States will continue its current decline.