When the United States Supreme Court issues a decision it is down to the media to explain the ruling and to put it into context. In new research covering two decades’ worth of Supreme Court rulings, Matthew P. Hitt and Kathleen Searles find that the media has increasingly framed them as victories or defeats for a certain side. This in turn has led to declining public approval for the Court. Introducing plain English briefings for judgments, they argue, might go some way towards changing the way they are covered by the media and in turn help improve the Court’s public image.

At the end of June the US Supreme Court rejected the Trump administration’s attempts to add a citizenship question to the 2020 census. Did Chief Justice John Roberts deliver in the clutch for the Democratic Party by joining four fellow justices and voting against the Administration’s plans? Media coverage of the US Supreme Court’s major decision emphasized the case’s winners and losers. For example, one outlet claimed the Court had “struck a blow” against the Trump Administration while another headline described the case as a “battle.” Few stories highlighted the legal intricacies of the Court’s opinion in the case which, despite the 5-4 final vote, included shifting coalitions of justices joining and rejecting various components of the opinion. In the media’s coverage of the decision, discussion of this intense legal debate between the justices is missing.

This approach to covering decisions affects the public’s perception of the Court. Many scholars contend that for America’s system of government to flourish, the judiciary should be able to make rulings that are generally followed by elected officials and the public. But, as Alexander Hamilton famously explained in Federalist No. 78, the courts rely on this voluntary acceptance and compliance from others; without it, then judicial rulings would just be empty words. 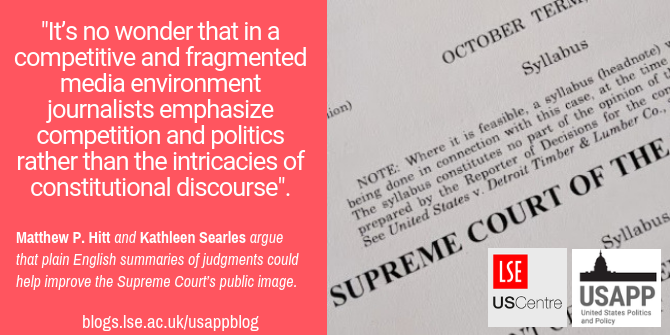 Even if one believes that the Supreme Court’s decisions are best explained by the ideological preferences of the justices, the trappings of legal formality seem to enhance the public’s perception of the Supreme Court. Indeed, lawyers tend to hold the Court in higher esteem, suggesting that exposure to legal culture raises this support as well.

But what happens when news media focus on strategy, partisanship, and competition? We analyzed primetime television news coverage of major Supreme Court decisions for 20 years on the three major broadcast networks and three major cable news networks. We found that journalists use a game frame, an approach to coverage that emphasizes strategies and tactics, often using the language of sports and war as a vehicle. Figure 1 presents the total number of television news stories about the Court’s decision in a given quarter, multiplied by the average proportion of game-framed words in those stories in the same quarter. We contend that this measure approximates the total volume of game-frame coverage of Court decisions in a given time period. Figure 1 shows an enormous spike in this kind of media framing in the aftermath of the Court’s Bush v. Gore decision in late 2000; there may be no better example of highly politicized and scrutinized decision in the modern era. 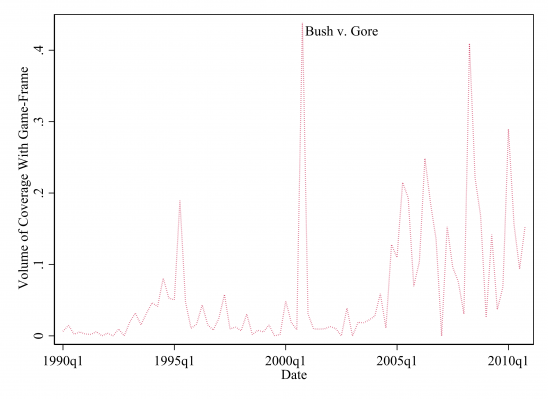 But how does such coverage affect public approval of the Court? To look at this, we started by conducting an experiment where we randomly exposed people to different kinds of coverage. When we showed people an actual clip of television news coverage that used the game frame to describe a Supreme Court decision they then reported reduced support for that decision, relative to people who saw a clip that talked about the same decision’s legal context. Then we looked at 20 years of public opinion data on Supreme Court approval. We found that as game-frame coverage on television news increased, public approval of the Court fell, even after we adjusted for whether the Court’s decisions in that period were “out-of-step” with the public ideologically.

While critics often cast blame on the media, it is hard to deny that the Supreme Court is party to the disapproval of their public image. When John Roberts “struck a blow” against President Trump, he simply announced the Court’s judgment and went home. Members of the media were given a lengthy, complex opinion to parse on their own. It’s no wonder that in a competitive and fragmented media environment journalists emphasize competition and politics rather than the intricacies of constitutional discourse. Some high courts around the world prepare short summaries of their judgments in plain English. Why doesn’t the US Supreme Court do that? Who knows, but our research suggests that such a reform might improve the Court’s image in the public mind by making it easier for television news to discuss legal and constitutional elements of the Court’s decisions.

Matthew P. Hitt – Colorado State University
Matthew P. Hitt is assistant professor of Political Science at Colorado State University. He studies judgment and decision making in American political institutions, especially the judiciary and Congress. His research has appeared in journals such as American Journal of Political Science, American Political Science Review, Energy Policy, Journal of Communication, Journal of Law and Courts, Law and Society Review, Political Communication, Presidential Studies Quarterly, and Studies in American Political Development. He is author of Inconsistency and Indecision in the United States Supreme Court, published in 2019 by University of Michigan Press, and co-author of Time Series Analysis for the Social Sciences, published in 2014 by Cambridge University Press.

Kathleen Searles – Louisiana State University
Assistant Professor Kathleen Searles holds a joint appointment in the Manship School of Mass Communication and the Department of Political Science at Louisiana State University.  Her interests include news media, campaign advertising, and political psychology.  Her work has appeared in journals such as Public Opinion Quarterly, The Journal of Computer Mediated Communication, Political Research Quarterly, Political Communication, Information Communication & Society, PLOS ONE, and Political Psychology.  She is currently working on a co-authored book manuscript with Oxford University Press which investigates the effects of mobile devices on information processing.