All countries now have a decade to achieve both universal health coverage and to prevent and treat substance abuse under the United Nations’ 2030 Sustainable Development Goals. Katherine Pettus argues that adopting a single-payer public health system is likely to be the only way to achieve these targets. Government procurement agencies, she writes, will also need to overcome the stigma attached to morphine for palliative care and the treatment of substance use disorder.

Morphine is a stigmatised medicine. It is associated with cancer, death, and end of life care. Purdue Pharma took care to distinguish OxyContin, its brand name opioid, from morphine, saying it “didn’t want OxyContin “to be polluted by all of the bad associations that patients and healthcare givers had with morphine.” Morphine is so stigmatised that, in some countries it is often kept in locked boxes marked “Poison.” It is also an “essential” palliative care medicine, used where available by appropriately trained practitioners, to relieve severe pain and breathlessness.

Single payer healthcare systems (where the government pays for healthcare through taxation), like morphine, are also stigmatised, particularly in the US, which labels them “socialised medicine,” and there is a growing push, even in Europe, for privatised healthcare, particularly given the high cost of medicines and medical devices. Yet a single payer system may be a government’s optimal mechanism for ensuring access to essential medicines for palliative care and treatment of substance use disorder, while preventing an epidemic of non-medical use of opioids, such as that reported in the US.

It’s crunch time for all the UN member states that have committed to the seventeen goals of the 2030 Agenda for Sustainable Development, which replaced the Millennium Development Goals in 2015. Governments now have 10 years to meet the 169 targets, one of which, Target 3.8 of the health goal, stipulates integration of the spectrum of primary health services under Universal Health Coverage (UHC). This spectrum includes adequate access to treatment for substance use disorder and to palliative care services. Since both entail adequate access to opioids, governments aiming to hit both targets will have to acknowledge and overcome the stigma that attaches to all opioids, both legal and illegal, in order to use that stigma to their advantage. Opioids included in the World Health Organisation (WHO) Model List of palliative care medicines are considered essential, which means they should be available, accessible, and affordable in the public health system at all times. The kind of public health system that best supports this palliative care objective and the objective of preventing diversion and harmful non-medical use is a largely public, or single payer system, like the UK’s National Health Service (NHS). 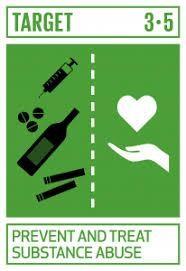 Governments wanting to hit the Target 3.8 component of ensuring access to essential medicines must ascertain if they have an opioid access crisis. Chances are that they do, since more than 2/3 of the world’s population lives in countries with low to inadequate access to opioid analgesics. If they do, improving availability of those medicines without triggering an excess crisis like the one ravaging parts of the US and Canada (which would undermine progress toward Target 3.5, “Strengthen the prevention and treatment of substance abuse, including narcotic drug abuse and harmful use of alcohol”) they must act as a single payer for medical opioids and make a public commitment to ensure adequate availability of internationally controlled essential medicines for medical use under UHC.

Acting as a single payer is a necessary, but not sufficient, condition for achieving both Sustainable Development Goal Targets. Government procurement agencies in such a system will also have to overcome the stigma attached to morphine and forgo the attractions of the more profitable “designer drugs” peddled by the pharmaceutical companies. The profits attaching to these medications also make them more susceptible to diversion and trafficking, as the textbook case of the US opioid crisis demonstrates.

The opioid epidemic and the pharmaceutical industry

That said, it is disingenuous for US courts to hold the pharmaceutical industry accountable for the damage done by the opioid epidemic. Not because corporate executives have clean hands in the case, but because the mandate of corporations is to maximise profits for shareholders, not to protect the public good. It is the government’s job to protect the public good, which includes the public’s health, from the harms generated by private interests, in this case the harms caused by “diversion and abuse” of substances under international control (opioids), and lack of access to opioids for medical purposes. Since industry’s job is to maximise profits, it must be expected to market legal commodities (such as branded designer opioids) even if they are harmful to public health. Government’s job is to limit those harms to the greatest extent possible. The US government, specifically the offices of the Department for Health and Human Services and the US Drug Enforcement Administration (DEA), failed spectacularly in this regard.

According to the media narrative, the regulatory agencies failed because industry influenced a majority in Congress to circumscribe the power of the DEA. As a result, cities, states, and tribes have to sue the pharmaceutical companies in civil court for ‘the damage done’ as Neil Young put it back in the day. This begs the question, though, how could Congress have been bought off in the first place? And what other regulatory measures might be necessary to head diversion and misuse off at the pass, so public health systems don’t have to deal with the downstream effects such as an epidemic of deaths from overdose?

The answer to the first question concerns the well-known role of money in US politics and the rights of corporations to influence the political process. This political configuration is not universal though, and in many countries influence peddling is a criminal offense. Countries with high corruption indexes will be vulnerable to the power of big pharma of course but can strengthen their public health systems to provide an adequate defense. 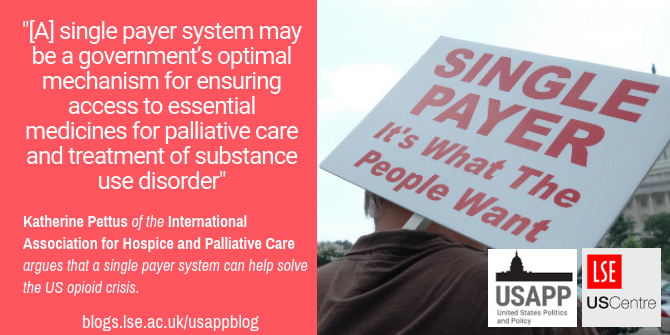 “Single-payer rally” (Photo by Joe Newman) by Public Citizen is licensed under CC BY NC SA 2.0

Countries and sub-units of governments that have succeeded in balancing the imperatives of supply and control of medications containing opioids provide best practice models that exemplify political commitment, often generated and supported by the dedicated advocacy of non-governmental organisations of providers and patients, to ensure adequate access to opioids for medical purposes while preventing diversion and non-medical use. Public health systems such as Colombia’s, which provide basic coverage for the whole spectrum of services, and in which the government acts as single payer for medicines, are the most strongly immunized against an opioid epidemic. Of course, this does not describe the US model, which combines public and private services and multiple payers.

In sum, the necessary and sufficient conditions for governments to achieve both Targets 3.5 and 3.8 are that they act as a single payer for medical opioids and commit publicly to adequate availability of generic (stigmatised) internationally controlled essential medicines for palliative care and treatment of substance use disorder. It’s a ‘both/and’ not an ‘either/or’ prescription. The risk of diversion to the illicit market is minimised, since government procurement agencies will avoid purchasing the profitable “designer drugs” peddled by both pharmaceutical companies and traffickers. Governments that procure generic oral morphine and methadone in bulk as the staple medicines of choice in the public health system can use stigma to their advantage, getting a bargain on efficacious and essential controlled substances that are unattractive to the black and gray markets.