While much national attention is focusing on the 2020 presidential primary race, it’s also election season now in some states. On November 5th voters will head to the polls in Virginia’s General Assembly elections. Lauren C. Bell writes that greater candidate recruitment, including of more women, and the growing distaste for President Trump in the Old Dominion State, mean that the Democratic Party has a good chance of retaking the state Assembly next month.

Virginia’s off-year General Assembly races have long been considered bellwethers for the next year’s presidential election, and 2019 is likely to be no different. But the stakes are higher than usual, with control of the ten-yearly redistricting process in 2021 up for grabs. And with campaigns being waged in redrawn House of Delegates and state Senate districts, the outcomes are perhaps somewhat less certain on a district-by-district basis than they have been in the past. Nevertheless, there are some promising signs for Virginia Democrats in terms of candidate recruitment, the statewide context, and with issues which look to be landing well with the electorate.

With Northern Virginia populated by a large number of federal workers (that part of the state is next to Washington DC), and with the East Coast urban enclaves of Virginia Beach and Newport News populated by a significant number of military members and contractors, both state and federal issues tend to affect elections in Virginia.

The Trump administration is deeply unpopular in Virginia, where the political class clings to nostalgic notions of politics as an honorable endeavor—the “Virginia Way.” Though there’s a fair amount of mythology in that, Trump’s brash, no-holds-barred approach does not sit well with many Virginians across the political spectrum, and national political events like 2018’s federal government shutdown have had harmful consequences for thousands of Virginians. Recent polling finds that gun control, education, and health care top the issues that Virginians say are “very important” to their vote in the upcoming General Assembly elections, with other recent poll results showing that likely Virginia voters would be more likely to vote for candidates who support an increased federal minimum wage and universal background checks for gun sales, but would be less likely to vote for candidates who wish to limit immigration.

The lack of competitive General Assembly elections in Virginia has been a defining feature of Virginia politics for several decades. There are some indicators that that may be changing, however. In 2019, 11 of 40 Senate candidates are running unopposed and 30 of 100 House of Delegates candidates have no challenger. As Figure 1 shows, these numbers represent a significant improvement over past general election cycles, where as many as 60 percent or more of House of Delegates seats have been uncontested and where a third to a half of state Senate seats have been won without challenge. 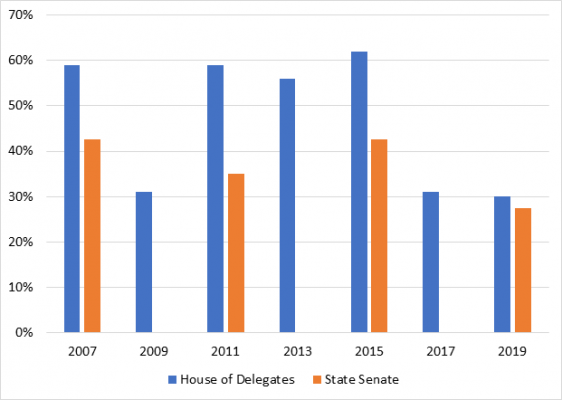 Democrats recognized that they could not possibly hope to exercise any degree of policy or agenda control in the state legislature unless and until they successfully competed for, and recaptured, the majority in each chamber. From 2015 until 2017, the Democratic Party of Virginia ramped up its recruitment efforts; this reached a fever pitch following the election of President Donald Trump in November 2016, with significant gains coming from the active self-selection and recruitment of women following Trump’s swearing in.

The Democrats’ efforts paid off. Unlike in 2015, when they contested just 58 of the 100 seats available in the House of Delegates, in 2017, the party ran candidates in 88 House districts. And while Virginia’s House of Delegates elections ended with partisan control of the chamber determined by drawing lots (the GOP won), the Democrats picked up 15 seats, exceeding most people’s expectations and revealing the extent to which President Trump’s administration cast a long shadow in the Commonwealth. 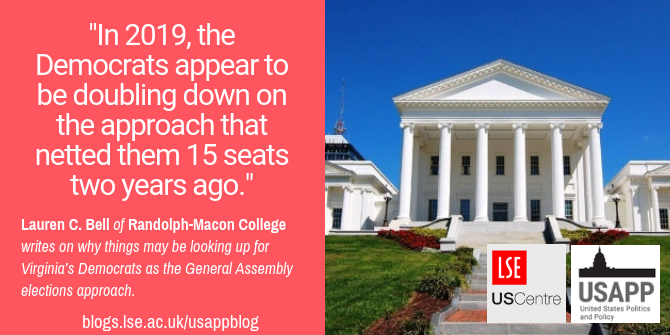 “Virginia Capitol Building” by Stephen Mahoney is licensed under CC BY NC SA 2.0

In 2019, the Democrats appear to be doubling down on the approach that netted them 15 seats two years ago. The candidates for office in both the Virginia House of Delegates and Virginia State Senate include more women than ran in 2015, and the Democratic Party of Virginia is contesting a substantially greater number of races in 2019 than it did in 2015. This year, there are only four state Senate seats (10 percent) without a Democratic Party challenger—three of which have an independent candidate running against a Republican—and only eight House of Delegates seats for which no Democrat is running. By comparison, the Republican Party has not offered a candidate for consideration in 28 of the 100 House of Delegates district in either 2017 or 2019.

Figure 2 illustrates some of the relevant demographic shifts in candidates running in comparison with just four years ago, the last time both chambers were up for election.

Figure 2 – Demographic Traits of Candidates Seeking Election to the Virginia General Assembly, 2015 and 2019 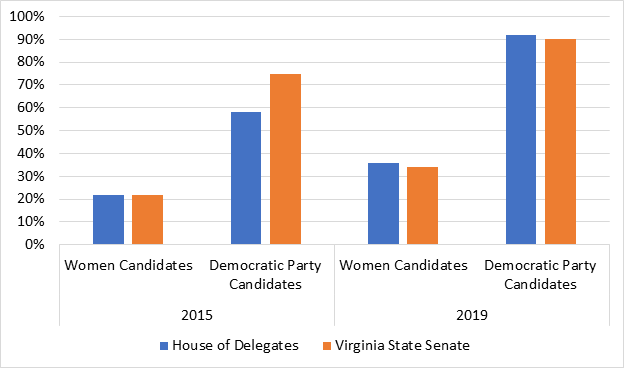 Source: “Elect No Strangers” (2019) and Ballotpedia (2015).  The values for Women Candidates are the proportion of women running for office in each chamber in each year, in total, without regard for party identification. The values for Democratic Party Candidates are the total number of races in each chamber in which the Democratic Party fielded a candidate.

Party identification and gender are most relevant here, since increases in the number of women and Democratic Party candidates in 2017 have been widely cited as explaining the Democrats’ large House of Delegates gains two years ago.  Furthermore, the Virginia General Assembly has historically been one of the least gender balanced among all state legislatures, and has been controlled by Republicans since 2000, with the exception of five years of Democratic control of the state Senate (2008-11; 2014) in the last 19. So increasing numbers of women and Democrats vying for seats in the legislature are notable trends in their own rights.

But despite calls to step aside, all three executives remain in power—and a recent poll demonstrates that the scandals have had negligible staying power with the Virginia electorate. That same poll reveals that President Trump remains deeply unpopular—and that more registered voters say that their opinion of President Trump is more important than their opinion of Governor Northam in determining their vote in the upcoming general assembly elections. Democrats’ electoral prospects have been further buoyed by a June decision by the United States Supreme Court to uphold redrawn state legislative districts that on balance are likely to benefit Democrats.

These factors, combined with what appear to be steady gains in recruitment and Democratic Party competitiveness, suggest that the Democrats are well-positioned to maintain or even increase their power in state government. Indeed, the most recent poll on the upcoming election finds that voters in the Commonwealth of Virginia would prefer the Democrats to control the state legislature, and that enthusiasm among Democratic partisans is higher than enthusiasm among Republicans and Independents. These factors bode well for the Democrats as the November 7 election nears.