Many in and outside of the US consider Georgia to be a solidly conservative state, but that is increasingly no longer the case, writes Will Rooke, who profiles the Peach State’s recent political history. A combination of changing demographics, an anti-Trump suburban backlash, and a big push against Republican voter suppression, he writes, may signal Georgia’s political transition from Red to Purple.

Once a cornerstone of the ‘solid south,’ and the ‘southern strategy‘ Georgia is now increasingly touted as a swing state. Won by Governor George Wallace on an openly segregationist platform in 1968 and a cornerstone of Richard Nixon’s more covertly racist appeals in 1972, the Peach State has been a Republican stronghold in Presidential elections ever since. Atlanta’s Ebenezer Baptist Church, where Dr. Martin Luther King Jr. was a pastor, is the spiritual home of the Civil Rights movement, but only Jimmy Carter (who had been Governor of Georgia) and Bill Clinton in 1992 have carried the state – where 40 percent still oppose dismantling the monument to the Confederacy on Stone Mountain – on a Democratic ticket for President. In the last decade, however, Georgia has been inching gradually leftwards. Between 2008 and 2016 it moved from 12.6 to 7.3 points redder than the nation on Nate Silver’s ‘partisan lean’ metric, and this reflects a more progressive politics. Looking ahead to 2020, Georgia is looking slightly more like Florida – and this makes the political future of the South look remarkably open.

The Peach State is changing

These changing politics are often attributed to changing demographics. Driven in part by a ‘great reverse migration’ back to the South of those whose great-grandparents fled the terror of Jim Crow, the share of African Americans in Georgia’s electorate has increased since 2002 from less than 25 to more than 40 percent, and the Asian-American and Latino/a populations both also doubled between 2000 and 2010. Though the city of Atlanta is increasingly unequal and gentrifying, it is part of a nationally-identified trend in which urban and suburban areas are solidifying as a voting bloc compared to rural areas. Factoring in the stretch of rural African American voters that cuts across the Deep South who are often forgotten by the political system, Georgia looks increasingly competitive politically.

There has also been a backlash against Donald Trump in suburban areas that, in recent memory, have been reliably Republican. Despite winning most of the state’s rural counties and by large margins in the more sparsely populated counties of the metro area (such as Hall, Forsyth and Cherokee counties where he received 70 percent and 150,000 more votes than Clinton), Trump lost suburban Cobb and Gwinnett counties, which are the state’s 2nd and 3rd most populous (and where 300,000 of his 2.1 million votes in the state were actually concentrated). These latter counties went blue in 2016 for the first time in a generation. Suburban Gwinnett county (which is now 42 percent white compared to 90 percent in 1990) was won by a Democratic candidate for the first time since 1976. In Cobb County, which has also seen an influx of young, college-educated voters in the last decade and which has a growing Hispanic population, Trump’s comments about women cost him dearly.

In the 6th Congressional district, which covers the northern suburbs that once sent Newt Gingrich (who helped pave the way for Trump’s style of politics) to Congress, these dynamics, alongside extensive grassroots funding, buoyed Jon Ossof’s (D) narrow defeat in the 2017 special election against Karen Handel (R), who is pro-life and supported by the National Rifle Association. Handel ultimately lost her seat in the 2018 midterms to Lucy McBath (D), the first Democrat to represent the district since it was created in 1993. McBath, who entered politics after her 17-year old son Jordan was shot and killed at a Florida gas station in 2012 following a dispute over ‘loud music’, was propelled by increasing concerns about racism and gun violence. 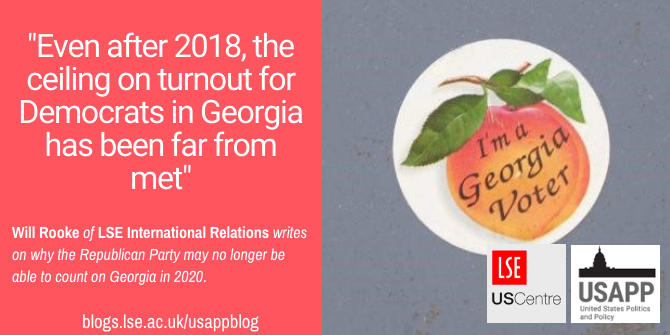 “I’m a Georgia Voter” by Paul Sableman is licensed under CC BY 2.0

The potential for change in Georgia – along with the extent of hostility to it – was crystallised in last year’s intensely controversial gubernatorial contest, which has been described as “a preview of the battle for the future of electoral politics.” Stacey Abrams (D), a progressive who would have been the country’s first black female governor, performed better than any Democratic candidate since 1998, but narrowly lost to Brian Kemp (R), who ran an atavistic campaign while presiding over the election as Secretary of State amid widespread evidence of the suppression and disenfranchisement of minority voters.

Following the gutting of the Voting Rights Act of 1965 in Shelby County vs. Holder (2013) (which eliminated the requirement for federal review of jurisdictions, mostly in the South, with a history of voter disenfranchisement), more than 17 million voters have been purged from election rolls nationwide in a move that even the Bush administration admitted in 2006 would deprive or dilute the right of minorities to vote. In Georgia in 2017, 107,000 registrations were removed for inactivity and a further 53,000 flagged for review –70 percent of these were African American.

A lawsuit subsequently filed against the state board of elections (which is being compared in possible significance to Brown vs. the Board of Education (1954)) argues that this was part of “an interlocking system of voter suppression” affecting voters of colour. In total, as the Abrams campaign detailed, there were 80,000 Abrams voters who either had their ballots rejected, who left polling stations due to long lines and antiquated voting machines, or who were otherwise discouraged from voting, in an election decided by 54,000 votes.

Despite misgivings about his ability to inspire and concern over his record on busing and mass incarceration, Joe Biden remains strongly positioned in Georgia and continues to lead in the primary polling. He has also secured most of the early endorsements, including that of Atlanta mayor Keisha Bottoms who supports his plan for criminal justice reform and has expressed scepticism about California Senator Kamala Harris’ prospects against Trump in Rust Belt states. Biden also has a close relationship with Rep. John Lewis, who helped make former Secretary of State Hillary Clinton’s case in 2016. Though turnout was only 29 percent in the presidential primary, Clinton claimed 71 percent of the vote to Sanders’ 28 percent and overwhelmingly won the Atlanta metro area. Biden, whose coalition is built in part on strength with African American voters, could perform similarly to Clinton, particularly if Warren’s current surge stalls or if Harris does not pick up momentum in earlier primaries.

But what would it take for the Democrats to win Georgia in 2020 where they lost in 2016? Because Georgia is highly ‘inelastic’ (with the second fewest swing voters of any state), turnout and mobilisation are likely to be crucial, as is combating voter suppression. High turnout in Fulton and Dekalb counties, a continuation or extension of recent dynamics in Cobb and Gwinnett, alongside outreach to rural African American voters, could eliminate the margin of roughly 200,000 votes by which Republicans have prevailed in Georgia in recent presidential elections.

High turnout would also have a knock-on effect on the state’s Congressional races. With the Republicans’ three-seat majority in the Senate at stake, it is still unclear who will challenge Kemp’s appointment to replace the retiring Johnny Isakson (R) but junior senator David Perdue (R) could be facing Jon Ossof (D), whose 2017 House campaign raised more than $23 million and who would become the Senate’s youngest member. In the competitive House races, Lucy McBath (D) will face a renewed challenge from Karen Handel (R) in the 6th district, and Democrats will be optimistic in the 7th district (which covers most of Gwinnett county), as Rob Woodall (R) is not seeking re-election after the closest race of the 2018 cycle against Carolyn Bourdeaux (D), who is running again.

A Drive to get the Vote Out

After her historic campaign for governor, Stacey Abrams, who delivered the Democratic response to the State of the Union in February, was unsurprisingly mentioned as a possible presidential candidate. In 2018 Abrams demonstrated an ability to energise infrequent or unlikely voters, voters of color, and liberal white voters. She also performed better among white voters than the previous Democratic candidate, Jason Carter, the former President’s grandson, when he ran for Governor in 2014. In Fulton County more than twice as many people voted for Abrams as for Carter, who also lost the northern suburban Gwinnett and Cobb counties that Abrams won. The Abrams campaign generated extraordinary turnout for a gubernatorial candidate: more Georgians voted for Abrams against Kemp (1.9m) in 2018 than for Clinton (1.8m) against Trump in the presidential election (where turnout is usually higher than in state-level elections).

Though Abrams has ruled herself out of contention for president in 2020, in order to focus on countering voter suppression through her non-profit organisation Fair Fight Action, she remains open to running for vice-president on any Democratic ticket. Yet more significant than the boost that Abrams’ presence on the ticket would bring is how her results in Georgia could be replicated – whoever the nominees end up being. The playbook prepared by the campaign for Democratic candidates and strategists on how to approach future elections in Georgia argues that this can be accomplished by expanding the electorate through registration and organizing; focusing more on infrequent voters than on swing voters; larger investment in the state in general; and rejecting false choices driven by stereotyping rather than evidence. “We do not lose winnable white voters because we engage communities of color,”  Abrams argues;  “We do not lose urban votes because we campaign in rural areas.”

Even after 2018, the ceiling on turnout for Democrats in Georgia has been far from met: in a state that Trump won by 212,000 votes in 2016, there were 134,000 African American voters in Fulton County alone in 2018 who did not cast a ballot. Bringing them into the political process would underline the work of Fair Fight Action across the country to counter the exclusion of minority voters. As Abrams put it recently: ‘minorities and the marginalised have little choice but to fight the methods of discrimination employed against them’ and politics ‘may be the best method of revolt.’