As a place famous for its food, the revitalization of New Orleans’ restaurants has been taken as a sign of the overall recovery of the city following 2005’s Hurricane Katrina disaster. Jeanne Firth writes that despite this progress, commentary on the recent restaurant boom can obscure the unevenness of New Orleans’ recovery, with increasing disparities in access to healthy food access by race, class and location existing alongside questions over the roles of celebrity chefs as the ‘heroes’ of the recovery.

Gumbo, po-boys, daiquiris—and the chefs who craft these famous foods and drinks—are almost synonymous with the city of New Orleans. Anthropologist David Beriss explains that “chefs and their restaurants often seem to stand in for the city where they work, so that one comes to think of some kind of necessary link between Los Angeles and the cooking of Wolfgang Puck, between Chicago and Charlie Trotter, and, of course, between New Orleans and Emeril Lagasse or Paul Prudhomme”.

Storm surges and levee failures after Hurricane Katrina in 2005 caused devastating damage in the region: up to ninety percent of coastal areas along the Gulf of Mexico and eighty percent of New Orleans flooded, including 110,000 homes and 20,000 businesses. Arguments for rebuilding New Orleans after this catastrophic flooding often hinged on the cultural importance of the unique and beloved city, referencing its food, music, and way of life. Each time an “OPEN” sign appeared in the window of a renovated cafe, humble po-boy shop or Zagat-rated culinary mainstay, the city celebrated: the number of re-opened restaurants became a tool for evaluating the overall health of the recovering city.

Now almost fifteen years since Katrina, New Orleans’ booming culinary scene is upheld as evidence that the city not only survived but is thriving. Heralded by restaurant critics as the site of a “restaurant renaissance”, New York Times food writer Kim Severson asserted that “few would disagree that the New Orleans dining scene has not only come back, but the city is a much better place to eat than it was even before the storm”. Lily Kelting argues that a “New Southern Food Movement” has emerged, a widespread celebration of US Southern cuisine which is diverse and hyper-regional, attributes that are aligned with national food movements calling for more locally-grown and seasonally-appropriate food.

Marketing the culinary attributes of New Orleans has been central to efforts to re-brand the city for investment and tourism. Tourism campaigns have featured chefs prominently, such as the award-winning “This is My Louisiana” campaign in 2013. In the advert, John Besh holds a giant pot, inviting visitors to taste the state’s thriving cultural economy. The text reads: “Much like our music, our seafood isn’t canned. In Louisiana, we take the best from every culture and blend it all together for the perfect gumbo, or, when it comes to music, jazz.”

However, there is much that the restaurant boom doesn’t tell us about the nature of the city’s (uneven) recovery. Which restaurants re-opened, which remained closed, and who owns these restaurants? Unequal access to healthy food existed before Katrina (hunger and food insecurity rates in Louisiana are some of the highest in the US.) and disparities along the lines of race, class and location were allegedly increased and further entrenched after the flooding. The Southern Poverty Law Center found rampant labor abuses towards Latinx laborers who were involved in rebuilding the city: eighty percent of workers reported having been denied pay. What were the wages and labor conditions for reconstruction workers rebuilding the restaurants? What are wages for the cooks, servers and dishwashers in these thriving restaurants today? These are all questions which await comprehensive answers.

In this context, chefs became positioned as the heroes of the city’s recovery, and foundations and philanthropic projects led by chefs have proliferated. Chef interventions are clustered in education, health, and training for food system workers—primarily focused on farmers, producers, and workers in the restaurant industry. A branch of California chef Alice Waters’ garden education programme Edible Schoolyard opened at a New Orleans elementary school, and locally-based chef foundations continue to launch, including the John Besh Foundation, Edgar ‘Dooky’ Jr and Leah Chase Family Foundation, Shaya Barnett Foundation, Link-Stryjewski Foundation, Arón Sánchez’s Scholarship Fund, and Kelly Fields’ Yes Ma’am Foundation, among others. Emeril Lagassee’s Foundation was established in 2002, an outlier in the fact that the institution pre-dates Katrina. 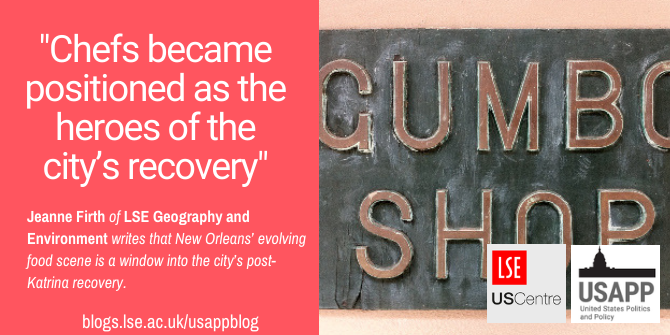 The John Besh Foundation recently rebranded and relaunched under a new name after Besh and his restaurant group were accused of widespread sexual harassment and misconduct in 2017, part of sweeping #MeToo allegations in the gourmet culinary world. As the restaurant group struggled to re-emerge after the allegations, the future of the foundation remained a question mark until it was eventually relaunched: should it continue? As the foundation relied primarily on grants and funds raised from the public, would people still donate?

Gumbo, a stew of meats and vegetables served with rice, is frequently invoked as a metaphor of New Orleans (as in the tourism advert featuring John Besh pictured here). Gumbo is used as a signifier of the city’s diversity and resistance to mainstream assimilation: food historian Jessica Harris explains, “it’s a case where these parts make an extraordinary whole without totally melting. You know, if you have a good gumbo, you can still see the okra, you still know that that was Andouille, you’re still aware of the fact that that was duck or chicken or what have you”. Media coverage of the tenth anniversary of Katrina in 2015 described the demographic changes in the city—primarily the loss of Black and African American residents across income levels and the establishment of larger Latinx communities—by referencing gumbo: “New Orleans has always been a place that blended cultures. Now, as the city grows, newcomers are adding flavors to the gumbo”.

The politics of New Orleans’ food scene is a window into the city’s post-Katrina recovery story. The landscape is an uneven one: social inequalities endure while chef philanthropy continues to expand amid a booming restaurant renaissance.