With only days to go before the Iowa caucuses begin the 2020 US presidential election season, Phillip Davies gives an outsider’s view of the campaigning now going on in the Hawkeye State. He writes that while caucusers are engaged with the political messages of the various Democratic candidates, there is growing tension over choosing their preferred candidate compared to one they think is most likely to beat Donald Trump in November.

For many years via visits during election season, I have observed and written and commented on US campaigns and elections. This has helped me create archives of campaign related material at Oxford University’s Vere Harmsworth Library and the British Library. In 2020 I again find myself on the margins of the apparently ever-lengthening US presidential election campaign. As the guest of friends who engaged with the ongoing election, I have been able to come to Iowa for the final two weeks of the caucus campaigns and will be at a caucus next week. After the caucuses take place on Monday February 3rd I’ll head to New Hampshire for the final week of campaigning in that state’s primary elections.

Presidential Candidates, but the Politics is Local

When I arrived at the airport in Waterloo, Iowa, last week the temperature was around -20C. The authorities around here are used to this kind of thing (and recognise that ice and snow clearance are potential hot button election issues), so the highway to my destination was clear and safe, even if the temperature was life-threatening. And the welcome has been genuinely warm.

A conversation with a cafe owner recently included the details of the last local elections, when disagreements over alterations to the traffic lane design along the small main street became a central issue in an electoral revolution that, albeit by small voting margins, completely overthrew the incumbent council. My informant, surprised by the result and unconvinced by the debate that had taken place, let me know that she had told one of the leaders of this electoral uprising ‘running things is not going to be as easy as you think.’

A similar engagement and easy familiarity with politics infuses the caucuses in Iowa. At a meeting for presidential hopeful Andrew Yang, the conversation between the candidate, his wife, Evelyn, and the hundred or so in the room was in equal parts earnest and comfortable. Iowa voters expect to meet even the candidates for the highest office in an intimate fashion, to discuss things, to assess personalities. A woman told me of the conversation she had with Evelyn Yang focusing on the experience of bringing up an autistic child – this woman’s nephew, Evelyn and Andrew Yang’s son – the personal connection this made between the candidate and this voter had moved her deeply.

This past weekend I drove hundreds of miles across an Iowan landscape that, in this season, and in these parts, is uniformly flat, and white, and crossed by a grid of long, straight roads. But there was a great deal of politics going on as well – that being the only time that those Senators competing for the Democratic presidential nomination could be spared from their jury duty at the impeachment trial of President Trump in Washington DC.

From Friday to Monday I attended events for six Democrats and one Republican. The candidates appeared sincere in their campaign missions. The audiences for the most part seemed engaged by the political messages they had come to hear – whether they were already committed, or, as former Vice President Joe Biden put it, ‘just checking me out’.

Among the audience members I talked with there seemed an undercurrent of apprehension that Donald Trump might after all have more than a fighting chance of another Electoral College victory, and an evaporation of earlier Democratic grassroots certainty that his would be a one-term presidency. This, in turn, is feeding the tension many Iowa Democrats feel between caucusing for the candidate they prefer and choosing to go for the one they think has most likelihood of beating Trump. The pain if their carefully considered choice might not be the right one to beat the present incumbent is almost palpable. 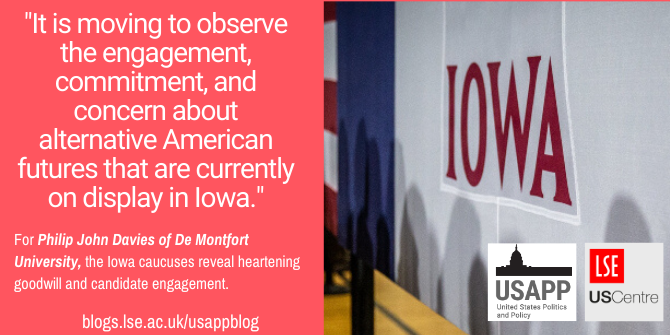 “Elizabeth Warren at Weeks Middle School” by Phil Roeder is licensed under CC BY 2.0

Vermont Senator Bernie Sanders drew an overflow crowd to a three-hour event at a theatre on the campus of Iowa State University. Bernie delivered a firm message to this receptive crowd on how he planned to establish health care for all, to eliminate student debt, and to sack Education Secretary Betsy DeVos (who, of course, would automatically leave office anyway). Massachusetts Senator Elizabeth Warren was also in energetic good form and drew an audience of hundreds to a barn-like food market in Cedar Rapids. Accompanied on this campaign sweep by Jonathan Van Ness from the Netflix series Queer Eye, they had attracted substantial LGBTQ+ support to the event. Former Mayor of South Bend Indiana, Pete Buttigieg at a museum in Fort Dodge, Minnesota Senator Amy Klobuchar on the 8th floor of a building in Waterloo and Joe Biden at the University of Northern Iowa in Cedar Falls each had audiences of about 150 to 250.

All these candidates engaged their audiences. All had narratives that tied experiences in their own lives to their policy choices, and to similar life experiences that may have affected members of their audiences. The issues were not all the same, and the suggested solutions ranged from the mildly progressive to the radical. However, candidate agendas overlapped and indicated a relatively widely shared Democratic playbook: health care, education, care for an ageing population, negotiating down the prices charged by international drugs companies, veterans care, redeployment and affordable or free retraining in a changing world, infrastructure investment, and the modest tax increases that only need be imposed on the very rich in order to fund these agendas.

Vlogging on the Margins

Among the two smallest events of the weekend was for Joe Walsh, briefly a Tea Party Congressman from Illinois whose views (bar a nod to the dangers of climate change) seem generally to be intact. Walsh now considers Trump ‘a danger to the country’ through his incompetence in office and his belligerence in foreign relations. After eliminating the hosts, the candidate team, the single-issue environmentalists, the journalists, the autograph hunters and the political tourists, attendees were thin on the ground. But the event did get into the local news media and onto the internet.

John Delaney’s event was in a bowling alley in Tripoli (pronounced Tripola, with the emphasis on the ‘o’). Most lanes were taken by the local high school bowling team practice, but a group of four men from Kentucky who had come to meet Delaney were bowling in lane one. One local man and three journalists had also turned up. The Delaney campaign bus arrived, containing the candidate’s Iowa organiser, but no candidate, since he was still in Washington DC. Delaney’s organiser connected the local man and John Delaney via his phone, using Facetime – and the conversation appeared to go well. And after that the Kentucky group got their time on this phone link, although this was complicated, since one Kentuckian was a vlogger and proceeded to interview Delaney (who appeared to be seatbelted into a vehicle in DC) while holding up his phone to record the sound and image of Delaney from the campaign organiser’s phone, to be livestreamed to his vlog followers in Kentucky. At this, possibly the most entertainingly quirky campaign event I have ever attended, I learned nothing of Delaney’s issue stances. Maybe the Kentucky vlog audience came out of it better, but they won’t be caucusing next Monday.

It is moving to observe the engagement, commitment, and concern about alternative American futures that are currently on display in Iowa.  At a training and information session – a ‘mock caucus’ – about 60 Democratic party activists, candidate representatives, precinct captains and interested citizens gave up a couple of hours to familiarise and remind themselves of the way a caucus operates. And it is not simple. There is a substantial agenda to get through.

Candidate supporters have a brief opportunity to pitch their case, candidate groups form in the room and are declared viable (more than 15 percent of those present) or not viable. The not viables could realign. Delegates to the county conventions are chosen when all the votes have been transferred, by physically moving to stand with a candidate group. This flash mob ballet of the politically concerned takes time and promotes many questions, all patiently discussed among these 60 self-selected trainees. It will be interesting to see whether the same careful, considerate equanimity prevails in halls full of a couple of hundred untrained caucusers on Monday 3rd February. What is undeniable is the powerful communal goodwill that goes into trying to make this unique demonstration of one kind of American democracy work.