Since the 1970s, the Iowa caucus and the New Hampshire primary have been first in the nation to select their presidential nominees. Laura Smith explains how this continuing tradition, fiercely defended by both states, is increasingly controversial because Iowa and New Hampshire are two of the whitest and least diverse US states. She argues the impact of their respective caucus and primary deserves scrutiny as neither state is representative of the Democratic base.

First or whitest states in the nation

Aside from being the first caucus and primary in the nation, Census data from 2000 released in 2006 demonstrated Iowa and New Hampshire are also in the top ten most white US states. The 2010 Census found Iowa’s white population to be 91.3 percent and New Hampshire’s 93.9 percent.

This contrasts starkly with Nevada and South Carolina, where the remaining Democratic presidential hopefuls will seek support this month. Both have a population that is 66.2 percent white and are more demographically diverse than Iowa and New Hampshire. Indeed, they were intentionally chosen in 2008 by the Democratic National Committee to hold their respective caucus and primary early in the election year. Yet complaints about Iowa and New Hampshire gaining outsize influence on presidential races by being first continue unabated.

To be successful, the Democratic presidential nominee must have the support of the party’s base and African Americans. In Iowa, African Americans comprise 2.9 percent of the population, whilst in New Hampshire it is 1.1 percent. While debate continues over their ability to impact presidential races, it is undeniable Iowa’s disastrous and delayed rollout of results damaged the influence their caucus had previously built up.

On Saturday 22nd February, Nevada will seek to demonstrate how to successfully hold a caucus, with officials confirming no apps will be used. The following week, on Saturday 29th February, attention will shift to South Carolina and whether former Vice President Joe Biden’s electability pitch and his reliance on the African American vote, which comprises approximately 60 percent of the state’s Democratic voters, can be sustained despite his apparent lackluster appeal amongst the white working class demonstrated by his fourth and fifth place showings in Iowa and New Hampshire.

The Iowa and New Hampshire factor

Iowa and New Hampshire have demonstrably affected previous presidential races. Indeed since the 1976 campaign, which cemented the ascendancy of the Iowa caucus and its impact, the Democratic presidential nominee has won either or both states. Of late, however, New Hampshire has been slightly less indicative of a candidate’s success, with John Kerry being the last candidate to win its primary before winning the party’s nomination in 2004.

More recently, Barack Obama demonstrated his viability as a candidate in 2008 by winning predominantly white Iowa, which despite his loss of New Hampshire to former Secretary of State, Hillary Clinton, fed a positive narrative in South Carolina. Conversely, Clinton’s route to the nomination as the most well-known candidate was complicated by Vermont Senator Bernie Sanders’ strong New Hampshire victory in 2016. Likewise, the 2020 Iowa and New Hampshire results appear to be hindering Biden. 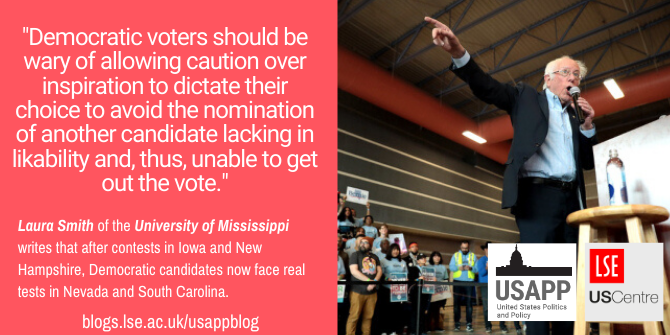 Although New Hampshire often chooses a candidate contrary to Iowa, the Granite State cannot ignore Iowa’s influence. In part, this explains former South Bend, Indiana Mayor Pete Buttigieg’s rise to first place in Iowa, followed by a strong second place in New Hampshire. In both cases Buttigieg was in close contest with Sanders and both campaigns have requested a partial recanvass of Iowa’s results. Arguably, Sanders is benefitting from the experience and trust developed as a known entity.

While many political commentators and analysts have pointed to Minnesota Senator Amy Klobuchar’s debate performance prior to the New Hampshire primary as contributing to the rise in her political fortunes, it was hard to pinpoint anything new in her message and approach. Instead perhaps, Klobuchar is finally receiving enough attention from politicos and the media. Thus helping her to a third place finish in New Hampshire, following a fifth place Iowa finish.

Massachusetts Senator Elizabeth Warren has arguably also suffered from insufficient attention, even prior to her disappointing finish in third and fourth place in Iowa and New Hampshire respectively. This is particularly evident in the minimal traction gained by the coveted endorsement she received from the Des Moines Register prior to the Iowa caucus. By comparison, in the last debate Klobuchar touted her newspaper endorsements.

This year, both Iowa and New Hampshire voters seemed overwhelmed by their choice of Democratic candidates. Approximately a quarter of Iowa democratic voters chose a candidate in the seventy-two hours prior to caucusing, with half of New Hampshire primary voters expressing similar sentiments. Equally, exit polls show six in ten voters were concerned about finding a “candidate who can beat Donald Trump.” Unfortunately for Biden, voters prioritizing electability were unconvinced by his pitch, whilst other moderate candidates like Buttigieg and Klobuchar saw their prospects rise.

Democratic voters should be wary of allowing caution over inspiration to dictate their choice to avoid the nomination of another candidate lacking in likability and, thus, unable to get out the vote. That said, it bodes well for eventual party unity that over eight in ten New Hampshire primary voters stated they intend to support the Democratic nominee, regardless of who it is.

Besides the similarity in results in 2020, Iowa and New Hampshire also share other likenesses. Both require retail politics – voters want to personally see a candidate and feel like they have got to know them. The demand on candidates for their unique appeal to connect in face-to-face town hall events, while they attempt to capture an authentic personal connection that rarely comes naturally, unless you are Bill Clinton. The skill of personability and authenticity are essential in being a successful candidate and in this sense, Iowa and New Hampshire provide much needed testing grounds and feedback, however harsh, for presidential hopefuls.

Fitting given that 2020 is the hundredth anniversary of New Hampshire’s first in the nation primary status, voter turnout broke its 2008 record high, which contrasted with a disappointing Iowa showing. New Hampshire democrats may in part have been motivated by anger. Exit polls indicate eight in ten expressed distaste at Trump’s presidency, the highest number since 2000. This is especially notable considering George W. Bush’s second term unpopularity.

Sanders performed well in both Iowa and New Hampshire, the latter likely due, at least in part, to his representation of neighboring Vermont. Yet this geographic proximity did not favor Warren, who represents Massachusetts, which also borders New Hampshire. This contrasts with New Hampshire successes by previous presidential candidates hailing from Massachusetts, namely Kerry and Michael Dukakis. Nonetheless, Sanders and Warren consistently share appeal amongst young voters and, combined with the organization of the Sanders campaign, was perhaps too much for Warren to overcome.

The top three candidates (Sanders, Buttigieg and Klobuchar) left New Hampshire with momentum. Simultaneously, there has been a winnowing of the presidential field with businessman Andrew Yang, Colorado Senator Michael Bennet and former Massachusetts governor Deval Patrick, all dropping out. The impact of this will be felt as the remaining hopefuls seek to garner their (in many cases) dejected supporters, with votes divided amongst the remaining eight candidates. More significant is the question of whether the three candidates currently seen as having momentum can sustain it or whether they peaked in New Hampshire? Only the more diverse states of Nevada and South Carolina will tell.