Last night the Democratic presidential candidates gathered in Las Vegas to debate ahead of the Nevada caucuses later this week. LSE US Centre Director Professor Peter Trubowitz writes that Massachusetts Senator Elizabeth Warren was the biggest winner from the debate after her pointed attacks on former New York Mayor, Mike Bloomberg. At this stage, the Democratic field remains muddled, he comments, and we may see a contested convention this July.

Who won the debate in Las Vegas last night?

Last night the bloom came off the Bloomberg rose. The former Mayor of New York, Mike Bloomberg, certainly didn’t win the debate and by the end of the evening, he was probably happy to just get out of Vegas alive. I don’t think Vermont Senator Bernie Sanders helped himself much either, but importantly, he didn’t self-destruct. If there was a winner last night, it was Massachusetts Senator Elizabeth Warren. Even while opening their wallets, her supporters are almost certainly wondering why Warren didn’t put in such a passionate, lively performance like this before the Iowa and New Hampshire primaries. But there’s a phrase for her strategy shift: “freedom is having nothing left to lose.” One thing we did learn last night is that Minnesota Senator Amy Klobuchar and former South Bend India Mayor, Pete Buttigieg, really don’t like each other. I’d be surprised if either gets much of a bump in the polls after their family feud performance last night. And then there’s the former Vice President, “Joltin” Joe Biden: his advisors must be relieved that someone finally broke Joe’s streak of absorbing all the incoming fire on the debate stage. He has Mike to thank for that. 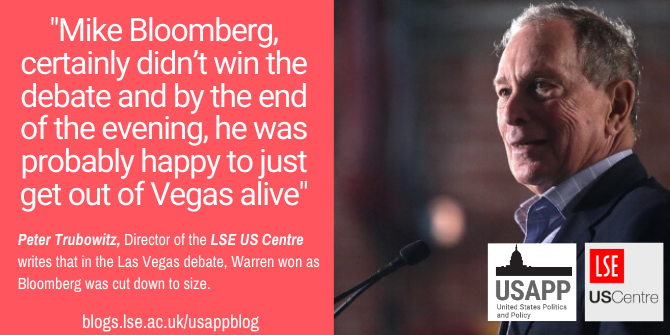 ‘Michael Bloomberg‘ by Gage Skidmore is licensed under CC BY SA 2.0

Where does this leave the Democrats?

Pretty much where they were before the debate last night: in a muddle. We have a front runner, Bernie Sanders, who is disliked, distrusted, or dreaded by many voters in the party. We have a rapidly rising Johnny-come-lately, Mike Bloomberg, who got chopped down to size last night. And we have everyone else, from Elizabeth Warren on the progressive-left to Amy Klobuchar on the party’s center-right, trying to figure out how to get enough delegates (15 percent is the minimum threshold to receive any delegates) in the upcoming primaries to have forward momentum. In this point in recent Democratic presidential campaigns, we are usually down to two frontrunners battling it out. Not this time. This raises all kinds of questions and scenarios, including the possibility of a contested fight at the Democratic convention in July (see below).

Will the Nevada caucus to change things?

No, I don’t think so. If the polls are on target, the Nevada caucus on Saturday should cement Sanders’s status as the Democratic frontrunner. In the wake of Bloomberg’s lackluster debate performance last night, a Sanders win in the Silver State will also fuel the stop-Bernie campaign that is gathering momentum within the party. Indeed, a Sanders win will likely increase the odds of a contested convention in July, when Democrats gather in Milwaukee. We got a whiff of that last night when all of the Democratic candidates except Sanders said that arriving at the convention with a plurality of the 1,991 delegates needed to secure the nomination does not mean you automatically deserve the nomination. The message was pretty clear: together we can probably assemble enough delegates to stop you from getting to the magic number. What that might mean for the campaign against Donald Trump (and the future of the Democratic Party) is another thing altogether.