Patriotism and what it means to be an ‘American’ is often seen as the domain of the Republican rather than the Democratic Party. In challenging Donald Trump for the presidency this year, the Democrats are faced with the challenge of offering a unifying national identity in the face of the Republicans’ nationalism, writes Kristin Hanson. The Democratic candidates have so far looked to reimagine, react, or to reclaim American identity from the Republicans’ more traditional symbols and tropes.

The vast majority of Americans feel ‘close’ or ‘very close’ to America—their national identity is important to them. People for whom national identity is important will strive to act in line with what they believe it means to be a good member of that group. Presidential election contests are an opportunity to influence the meaning of what it means to be an American, and to use this identity to mobilise the electorate. In these campaigns the performative element of national identity—patriotism—is highly important, but its meaning is often controlled by the Republicans. Will the Democrats wrest patriotism back in 2020?

Every four years Republican US presidential candidates position themselves as the sole defenders of American patriotism: from Richard Nixon’s condemnation of flag-burning in Vietnam War protests, through George Bush’s support for the Pledge of Allegiance in schools, to Donald Trump’s ‘America First’. The historical ideal of American patriotism as one united by the American creed and the American dream has been increasingly usurped in these contests by a performative nationalism. For the political right, patriotism tends to reflect a reverence for the symbols of the country as well as pride in the country’s national superiority and power. Over the decades, American patriotism has become intertwined with conservative identity to the extent that only 57 percent of Democrats (vs 77 percent for Republicans) say their own party is the most patriotic.

Democrats, and indeed liberals throughout the world, are tasked with presenting a unifying national identity in answer to the patriotism of the right in national elections. In their stump speeches, the (current and former) candidates have thus far primarily taken one of three approaches to defining American identity: re-imagining, re-acting, and (re-)claiming.

The progressives—Vermont Senator Bernie Sanders and Massachusetts Senator Elizabeth Warren—re-imagine American identity by proposing big, systemic change. They tie these changes to the American story by citing their historical American heroes. For Warren it is the individuals who fought against the system for workers’ and civil rights. Sanders connects most strongly with FDR and positions his movement as an extension of Roosevelt’s New Deal. Their campaigns are proposed as movements and revolutions within the country and are discussions of individual rights. The nation is most clearly seen as a collection of individuals in these messages—not an abstract—and the trappings of traditional patriotism are rarely invoked. This is consistent with the political left’s idea of patriotism which is more likely to include civil disobedience and criticism of the country and its leaders. These candidates have not taken on the right’s traditional patriotism, but instead have represented the nation as a union of people with the aim of securing individual rights.

“flags everywhere” by Bastian Greshake Tzovaras is licensed under CC BY SA 2.0

The moderates on the other hand, invoke more traditional symbols of American patriotism. Joe Biden includes references to the Constitution, to the American Creed, and the greatness of the country. But the inherent incompatibility between liberal ideology and reverence for symbols means the narrative becomes less about the place for Democrats in the American story than about what America is not: namely, Donald Trump. The value of ‘dignity’ and the objective ‘taking back the soul of the nation’ are new and unfamiliar patriotic motives. Although this combination of national symbols and reactive definition of American identity is short-term in its vision, it may be all that is required to win this primary and may very well be enough to bring back disillusioned 2016 Trump supporters.

Minnesota Senator Amy Klobuchar and former South Bend, Indiana Mayor Pete Buttigieg employed yet a third approach by (re-)claiming certain patriotic symbols. Klobuchar opened her kick-off speech by using the Mississippi river and all its tributaries as a metaphor for the nation, tying it to the e pluribus unum of national unity, acknowledging a great national landmark and tying it to a liberal value. Buttigieg was even more direct, reclaiming terms that have been commandeered by the right by redefining ‘security’ and ‘freedom’ to include economic and civil rights, and arguing that ‘supporting the military’ is not just standing for the flag, but also respecting the lives of soldiers. This tactic attempts to re-define patriotism without abandoning symbolic attachments. It allows ‘patriots’ to hold on to their values that they recognise as American, while providing new meaning that corresponds with the positions held by Democrats.

The fight goes on…

So, will a 2020 Democratic presidential nominee construct an American identity story that will not only mobilise the electorate, but regain patriotism for the left? With the only candidates seeking to re-claim patriotism for the long-term out of the primary race, it looks unlikely. Biden’s construction of an America of anti-Trump values is clearly aimed at returning to a pre-Trump era, poised to address short-term mobilisation. Conversely, Sanders’ re-writing of American national identity in his image would represent a seismic change to what it means to be a true American, and is unlikely to be recognised as patriotism in the near-term. In 2020, it appears that the struggle for a Democratic patriotism will continue.

Posted In: 2020 Primary Primers | Elections and party politics across the US | Kristin Hanson 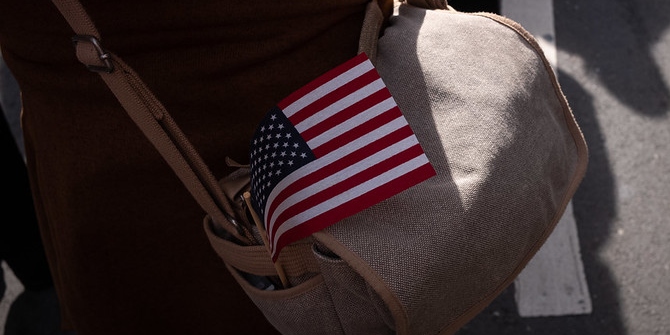