As the second most populated state, Texas is a significant electoral prize in presidential contests. Robert Ledger, Madison Imiola and Peter Finn write that changing demographics mean that Democrats are becoming more hopeful about winning the Lone Star State, but other factors such as primary turnout and the COVID-19 pandemic point to an uphill battle this year.

No Democratic presidential nominee has won Texas since Jimmy Carter in 1976. Presidents Bill Clinton and Barack Obama showed winning Texas is not essential for overall election victory, but as the state with the second-most electoral college votes at stake (after California), Democrats would certainly like to reclaim Texas for what may well be a close race this year.

Texas has a rapidly growing population, especially of the Latino demographic. This growth has seen both Dallas and Houston grow by more than a million over the last decade (with similarly high growth rates for State Capital Austin) and fed into the close call (engendered at least in part by a shift to a more urbanised electorate) that almost saw Democrat Beto O’Rourke defeat an incumbent Republican, Junior US Senator Ted Cruz, in 2018. Yet, the Covid-19 pandemic, along with the benefits resulting from Republican incumbency at both the federal and state level, mean Joe Biden is unlikely to swing Texas into the Democratic camp in 2020.

Those looking for evidence that interest in voting for the Democratic Party in Texas is growing may find them in this year’s Super Tuesday results, where turnout rose by just over 642,000 compared to 2016; no mean feat in a state of under 30 million. As expected, former Vice President Joe Biden won the contest with 34.5 percent, with Vermont Senator Bernie Sanders seeing his share in a fragmented field fall slightly from 33.2 percent in 2016, when he and Hillary Clinton shared almost all the vote between them, to 30 percent. Though Texas is certainly becoming increasingly more supportive of Democratic candidates, Democratic primary turnout in 2020 still lagged behind 2016 Republican turnout by more than three-quarters of a million voters. Indeed, Trump managed to gain the support of more Texans in a relatively uncontested 2020 Republican primary than Biden, Sanders, Michael Bloomberg and Senator Elizabeth Warren put together.

Sanders and Biden were the only two candidates to emerge from Super Tuesday with any viable chance at the Democratic nomination. After Sanders suspended his campaign and threw his weight behind the former vice president, followed swiftly by Obama and primary rivals such as Warren, the nomination process is essentially over. Biden must now try to connect with the nearly two-thirds of remaining Texas Democrats who voted for someone besides him in the primary and, as he has been forced into self-isolation, must do so from his campaign headquarters in the basement of his Delaware home. 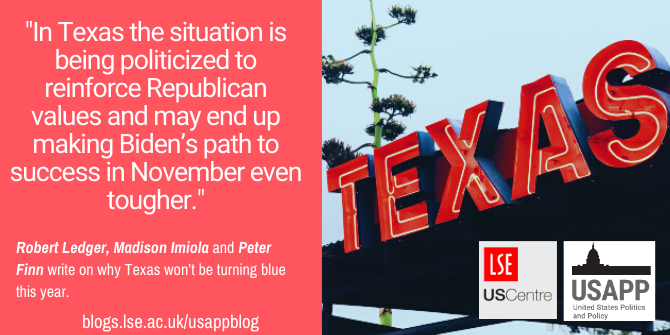 Photo by Enrique Macias on Unsplash

Covid-19 and the State of the Race

As elsewhere, the Covid-19 pandemic, and its deluge of associated coverage, is overshadowing discussions of the November presidential elections in the Texas media (the normally extensive coverage of the Houston Chronicle, for instance, appears light on 2020 content). Indeed, for many Americans, currently awaiting stimulus checks and watching the human toll of the virus increase daily, an election more than six months in the future will likely be, at best, an afterthought.

The coronavirus situation overshadows any news about the election, yet President Trump remains ever-present in the media giving updates to the situation. News coverage on Trump has not let up during the Covid-19, but the same cannot be said for Biden, who does not hold any position relevant to updating the public about the virus. Biden, therefore, is having to compete for attention with the biggest story in the news, all while adapting in real time to a virtual campaign that does not play to his background as a retail politician.

With the country increasingly shut down (but some restrictions already being lifted in Texas), one could forget that electioneering continues unabated. Yet, the pandemic, and associated shut downs and blanket media coverage, are creating opportunities for Republicans in the framing of actions and responses with a view on November.

The Benefits of Incumbency

While Biden remains largely missing from Texans’ TV screens and news, Texas Republicans have been able to utilise incumbency during the coronavirus pandemic to advance a Republican agenda and conservative values. Texas Governor Greg Abbott deemed abortion a non-essential healthcare service. The pro-life stance is a pillar of the Republican Party and under Abbott’s order most abortions are now effectively banned while the medical equipment they require is rerouted to healthcare workers fighting the coronavirus. Faith is another pillar of the GOP platform, and Abbott deemed churches an essential service: allowing congregation members to continue to gather in-person despite the state-wide ban against public gatherings and evidence from countries such as South Korea that church services can indeed be an incubator of the virus.

The Republican-controlled government of Texas has decided what is essential based on party principles, meaning the Covid-19 crisis will not affect the presidential race in a value-free manner. Indeed, in Texas the situation is being politicized to reinforce Republican values and may end up making Biden’s path to success in November even tougher.

Biden has declared the November presidential election cannot be delayed. Regardless of whether the election occurs as scheduled, the typical election cycle has already been disrupted and states are busy preparing contingency plans for the general election.

Reflecting such calls, Texas has expanded the ability for voters to request a mail-in ballot if they feel their health will be endangered by voting in person. It is still too early to forecast how this might affect the election. However, uncertainty about the voting process, and the potential for the disenfranchisement of voters it may cause, may make it harder for Biden in the state.

One particular unknown is how the dire economic effects of the Covid-19 crisis will feed into voting choices. As of April 16th over a million new Texans had registered for unemployment relief, while on April 20th the price of some Texas Crude futures contracts slipped to an almost incomprehensible -$37.63 per barrel at market closure. Both markers that illustrate just how precipitous the economic contraction of recent weeks has been. Yet, given partisan wrangling, it is at least possible that any economic news, good or bad, is seen through and reinforces peoples pre-existing biases.

Ultimately, current events appear to be reducing the likelihood of Biden winning Texas in November. If, however, Biden does win, Texas Democrats such as Beto O’Rourke and Julián Castro, who both ran presidential campaigns themselves this election cycle, could find themselves assuming key roles in Biden’s administration. For now, they’ll have to hope their endorsement and support of Biden’s coalition can help propel him to victory – whatever form the election takes.