The COVID-19 pandemic has given Donald Trump ample opportunity to enact controversial measures and advance his America First agenda under the guise of emergency powers. Laura Smith argues that Trump’s latest announcement of his intent to ban all immigration is the most egregious example of his xenophobia. She places this intended ban in the context of the long history of American xenophobia and limitations on immigration.

From the Know-Nothing Party to Donald Trump

Amid the ongoing crisis of coronavirus (COVID-19), Donald Trump’s tweet on 20 April declaring his intent to sign an executive order suspending immigration has received less media attention. While it is undeniable that everything from government administration to everyday travel has been affected by the pandemic, Trump’s tweet yet again symbolizes his xenophobic, America First perspective. Trump’s statements and actions reflect the long history of xenophobia in America.

Despite being a nation of immigrants, America has a sordid history when it comes to immigration. The persistent strain of xenophobia in America dates back to the Know-Nothing Party opposing the increase in Catholic immigrants fleeing famine and instability in Ireland and Germany in the late 1840s and 1850s.

However, American politicians did not succeed in preventing immigration from specific countries until the late nineteenth century. In 1882, the Chinese Exclusion Act was signed into law to prevent what was termed the “yellow peril” of Chinese immigrants. It wasn’t until 1943 that Chinese immigrants were once again accepted, but this was limited to only 105 people every year.

The Immigration Act of 1924 supported this cap through creating a quota system for immigration of peoples coming from outside the Western Hemisphere. Notably, ethnicity trumped national origin, thereby further limiting immigration by people deemed Chinese, regardless of their country of residence. It was not until Lyndon Johnson’s “Great Society” that the Immigration Act of 1965 finally did away with the quota system. During the 1990s through to now, politicians – Republicans in particular – have focused their immigration concerns on illegal migration through Mexico. The xenophobia experienced by Hispanics in response to the increased focus on illegal immigration has not, however, translated into a system or society that welcomes legal immigrants.

The impact of Trump’s America First

Throughout his presidency, Trump has used tweets to foreshadow executive orders which are often controversial and end up being constitutionally dubious. Trump’s infamous “Muslim ban,” in which he issued an executive order in his first 100 days trying to ban the travel of Muslims to America from seven Muslim-majority countries, is a particularly pertinent example. But Trump learned from this experience that in order to have any immigration ban upheld in court, it could not single out one religious group.

The ongoing health crisis has created ample opportunities for Trump to expand executive power and implement controversial policies. One such example is his recent declaration to halt American funding of the World Health Organization (WHO), which is similar to his isolationist proclamations against organizations that bring together international allies like the North Atlantic Treaty Organization (NATO). Trump is demonstrating how COVID-19 is, in many ways, a crisis and an opportunity.

Trump does not appreciate the symbolic significance of the presidency, as is evident in the continued controversies he creates. With one breath, he may simultaneously urge governors to follow the federal government’s guidelines for re-opening businesses and institutions in their states, whilst encouraging protestors to defy stay-at-home orders before gathering in public spaces is deemed safe. Furthermore, Trump’s previous reference to COVID-19 as the “Chinese virus,” has incited hate crimes against Asian Americans. The power of the president’s bully pulpit is impossible to diminish, and Trump should stop underestimating the impact of his words on human life. 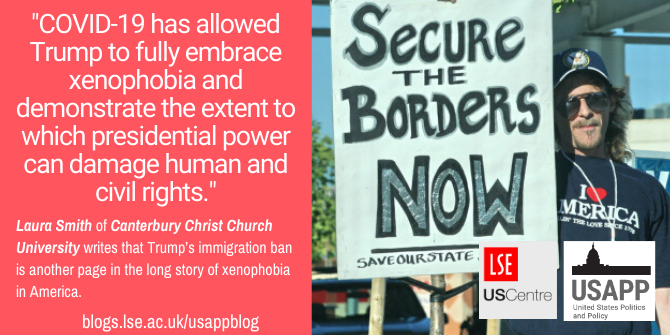 “Immigration Protest” by Travis Wise is licensed under CC BY 2.0

Racism and Xenophobia, the twin pillars of white nationalism

In January 2018, a firestorm of controversy once again engulfed the Trump administration over the president’s leaked Oval Office comments condemning immigrants from “shithole countries.” At the time, and since during incidents such as Trump’s attack last year on four American congresswomen of color to “go back” to their home country, some political commentators have determined Trump’s immigration rhetoric to be racist.

Racism was apparent in how Trump expressed a desire to have more immigrants from majority-white countries such as Norway, in 2018. Interestingly, in February Trump’s then acting chief of staff Mick Mulvaney stated in a private speech in the UK that America was “desperate” for immigrants to support the economy. However, his current intent to ban all immigration demonstrates that Trump’s prejudice encompasses more than just racism.

Even if in the current COVID-19 crisis, Trump’s executive order banning immigration is mainly symbolic, the damage is done, and a precedent has been set for the reach of emergency executive powers. When the president appears to support white nationalism, as he has done in the past, including his defense of neo-Nazis rallying in Charlottesville, Virginia in 2017, he validates their values of racism and xenophobia.

Trump’s actions in support of white nationalism reflect his consistent rhetoric. When immigration by one group of peoples is under attack, all immigrants are under threat. COVID-19 has allowed Trump to fully embrace xenophobia and demonstrate the extent to which presidential power can damage human and civil rights.