This month has seen the most recent push to remove Confederate statues in cities across the Southern US. Nathan T. Carrington and Logan Strother unpack the argument made by some who support the statues that their removal flies in the face of freedom of speech. They argue that questions over the fate of Confederate monuments are by their nature, political.

Last week, Virginia governor Ralph Northam announced the removal of the statue of the Confederate General, Robert E. Lee, from Monument Avenue in Richmond. This removal was one in a string of recent high-profile Confederate icon removals that has swept the country in the wake of the most recent #BlackLivesMatter protests, including another monument in Richmond, as well as monuments in Alexandria, Mobile, Birmingham, and Louisville, just to name a few.

Removal of high-profile Confederate monuments is often met with protest from those who seek to keep them in place. Most of the time, these pro-monument sentiments take the form of “heritage, not hate.” However, some go deeper and make the argument that their removal violates America’s longstanding commitment to free speech.

Indeed, Virginia state senator and gubernatorial candidate Amanda Chase responded to the Richmond announcement with a broadcast on Facebook Live claiming their removal would raise free speech concerns since they are a form of “artistic expression.” She is not alone in this view. Earlier this year, the 5th Circuit Court of Appeals rejected a similar argument made on behalf of the Texas Division of the Sons of Confederate Veterans against the University of Texas, and several historical preservation groups made a similar argument against New Orleans in 2015.

As a matter of law, these claims hold little water. Under the “Government Speech Doctrine,” state and local governments are not bound by First Amendment considerations when deciding to “speak,” such as when erecting or removing monuments on public property. Even so, in recent work, we find that 14 percent of the public holds the view that removing these monuments violates the right to free speech. Given that rights-based claims (such as free speech) hold significant weight in our society and can help mobilize supporters, it appears that these claims are strategically motivated by those seeking to preserve the monuments or delay their removal.

We also sought to look at the issue from a theoretical perspective. Are these claims useful in resolving this debate? That is, can Confederate monuments be preserved by appealing to free speech theory alone? In forthcoming work, we put these claims to the test and our analysis indicates the answer is an unambiguous “no.”

Specifically, we looked at four prominent theoretical reasons why a country might value freedom of expression: arrival at truth, democratic self-government, individual self-autonomy, and a critical perspective. After looking closely at these reasons, we then argue that the Confederate monument question is inherently political and cannot be resolved by appeals to free speech law or theory.

One justification for free expression is that it allows society to arrive at truth. Whether the speech is true is irrelevant, this line of argument goes, as all speech enhances the marketplace of ideas. Aside from allowing falsehoods to be exchanged for truth, when people are confronted with falsehoods they reaffirm and rededicate themselves to truth.

An argument for keeping Confederate icons drawing from this tradition could go like this: regardless of what they symbolize, monuments should remain because they enhance the marketplace of ideas by forcing confrontation between truth and falsehoods.

There are two objections to this defense: the tyranny of the majority and the harm principle.

The “tyranny of the majority” refers to a majority unjustly inflicting harm on minorities using the coercive power of the government. An argument against the monuments could be that they epitomize the majority forcing its viewpoints on a minority incessantly haunted by racism. Furthermore, John Stuart Mill’s theory allows for government coercion when it serves the ends of preventing harm (the “harm principle.”) It is hardly a controversial statement to say that Confederate icons cause harm to African Americans.

Although one can argue that Confederate icons help society arrive at truth by forcing confrontation with its racist past, it can also be said that the government’s sponsorship of this speech is harmful and an example of the tyranny of the majority. Ultimately, this theory does not help us to be able to conclude what should happen to the monuments. 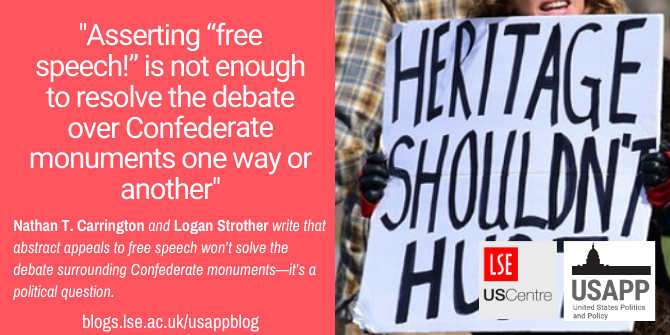 “No Confederate Conferences (2020 Feb)” by Anthony Crider is licensed under CC BY 2.0

A second theory holds that free speech is essential to democratic self-governance. The basic idea here is that all speech related to politics, whether directly or indirectly, must be absolutely protected.

Confederate icons are clearly issues of public concern: they commemorate a brutal Civil War which marked an important turning point in our society and constitutional order and spur discussions about racism in society. Thus, this theory seems to support leaving the monuments in place.

However, an argument can be made against Confederate monuments using the same theory by asserting that they actively hinder democratic self-government. For example, if Confederate icons impede democratic self-governance by discouraging minorities from participating, that would indicate that they are antithetical to the given justification of free speech. Therefore, a self-government perspective on free speech can be used to justify both keeping and removing these monuments and cannot resolve the issue at hand.

To this point, the right of free expression is valued as a means to some greater end (truth or self-government). However, the individual self-autonomy approach to free speech argues that freedom of expression is valuable as an end unto itself. To defend the monuments under this theory, one could argue that they represent the artistic expression of the sculptor, or that they spur creativity in others.

Conversely, one could argue that these monuments actually inhibit individual autonomy, especially among African Americans. For example, following the toppling of the Silent Sam statute on the UNC campus, graduate student Jerry Wilson noted that, “[w]hen you have to take the long way between classes in order to avoid the sight of a statue that denies your human dignity, the Southern Part of Heaven can feel an awful lot like hell.”

Again, we find a theory that can be marshaled to support or oppose the removal of these icons.

For many critical theorists, there is a need to place limits on the acceptable and legal freedom of expression. Some speech (such as slurs) fails to respect equal human dignity, and thus can only serve limit the quality of discussion. Critical theorists do not dispute the value of free speech. Instead, they argue that some speech is counterproductive and thus that appropriate boundaries to free expression should be recognized. The rub, of course, is in locating the appropriate boundaries.

It’s easy to make an argument against Confederate monuments from a critical perspective. Such monuments have an effect on speech that obviously disproportionately affects African Americans. This has the consequence of limiting debate and, therefore, runs counter to the principal justifications for free speech.

However, (with effort) we can make an argument using a critical theory approach justifying the existence of Confederate monuments. Confederate monuments are not necessarily comparable to racial slurs that undermine the justifications for speech. Indeed, Confederate icons might serve to embolden minorities into speaking out and engaging in the democratic process. Like the others, this perspective is inconclusive on the Confederate monument question.

So, where does this leave us?

Asserting “free speech!” is not enough to resolve the debate over Confederate monuments one way or another, nor are appeals to existing constitutional law. Ultimately, the question of whether to remove or keep Confederate icons in our public spaces comes down to politics. The people themselves will—and must—decide the fate of these icons.