In recent months, former Vice President Joe Biden has opened up a significant lead over President Trump in the 2020 election race, as voters react to the president’s poor handling of the COVID-19 pandemic. And while Democrats may feel that they have reasons to be cheerful heading into November, Osman Sahin argues that Donald Trump’s ability to tap into voters’ desire for routines and security may yet allow him to secure another electoral victory.

As of 17 July 2020, around 3.6 million people have tested positive for COVID-19 in the US, with nearly 140,000 deaths. These figures make the US the worst hit country in this global pandemic in terms of absolute numbers. President Trump’s poor response has clearly not helped: he has overlooked the opinion of experts, argued that coronavirus would disappear like the flu and even implied that the consumption of home-cleaning disinfectants might help to kill the virus. Motivated by soaring unemployment and impending economic recession, in May Trump pushed for a premature relaxation of lock-down measures. He acknowledged the price of reopening could mean more lives being lost, but quickly asserted, “we have to get our country open and we have to get it open soon”.

Trump’s push for the reopening of the economy was understandable, with economic growth as the foundation of his re-election campaign for good reason. Indeed, World Bank figures show that, under his presidency, unemployment decreased from 4.9 percent in 2016 to 3.7 percent in 2019. GDP growth from 2017 to 2019 averaged 2.5 percent, which is a healthier figure when compared to a 1.8 percent average under President Obama.

Americans have also felt that the economy was performing well. Trump has suffered from relatively poor overall approval ratings, with a floor of 36.4 percent in December 2017 and a high of 45.8 percent in March 2020. This reflects poorly against historic average presidential approval ratings from 1938 to 2020 of 53 percent. However, his approval ratings related to the economy have been considerably higher. A January 2020 CNN poll, for instance, showed 55 percent approved of Trump’s handling of the economy. Another 55 percent argued that things are going very well or fairly well in the country. By comparison, Obama never reached this 55 percent benchmark. If Bill Clinton’s campaign strategist James Carville was right, these figures were indeed the key to Trump’s second term.

Beyond this, until recently Trump had been facing an indecisive and divided Democratic Party. Early 2020, for instance, saw the Democrats seriously fractured and unable to agree on a credible presidential challenger, with some afraid of a “drawn-out primary with deep-pocketed frontrunners bashing each other and long-shot candidates refusing to drop out”. In short, fear existed that a bruising primary process would splinter the vote, with effects stretching to the election. Moreover, the Democratic establishment feared Vermont Senator Bernie Sanders, who was probably their best shot against Trump, almost as much as it feared Trump. Combined, these factors led many to expect Trump’s re-election in November. For instance, a February 2020 CBS News Poll found that 65 percent expecting Trump to win in November.

Some reasons for Democratic optimism

However, the COVID-19 pandemic changed things in a matter of weeks. Trump’s incompetence in the face of the pandemic and the ensuing lockdown (and its fall-out effects on the economy) seem to have reversed expectations about November. The World Bank now estimates the US economy will contract by 6.1 percent in 2020, while unemployment spiked from 3.5 percent in February 2020 to 13.3 percent in May 2020. Both are clearly bad news for Trump.

As a result, many commentators now argue Trump will lose in November, with opinion polls supporting their views. On average, Biden leads Trump by 7.9 percent in public opinion polls between 1 June and 11 June 2020. In fact, the last poll favoring Trump over a Democratic candidate was on April 3rd 2020. Accordingly, there appears to be reasons for the Democrats to be optimistic ahead of November.

Why the Democrats should be cautious

Despite this positive narrative, the election may be far from a shoo-in for the Democrats. If we start to think about how Americans’ sense of security has been knocked by COVID-19, then Trump’s re-election actually could be more likely than it may appear.

For most people, feelings of safety and security come from established routines which tend to go on with few interruptions. But COVID-19 has been the biggest interruption to Americans’ routines in living memory; the pandemic has made feelings of anxiety and danger almost universal. Everyday life is no longer predictable.

As a populist, Trump plays to his voters’ need to feel secure in their day to day lives. Populists either exploit existing threats to people’s feelings of security or they trigger such sources to generate support. Populists do this by first framing a situation as a crisis and, secondly, by defining it as an existential threat. The construction of a crisis can also amplify negative self-image of those subject to the populist attacks, as well as their negative view of the country they live in and the challenges they face. Accordingly, crises serve as reasons to legitimize the construction and the continuation of populist governments.

As such, Trump might benefit from the social and psychological side effects of the lockdown, as people crave a return to established routines. In a pandemic-ridden country where citizens feel nostalgia for their daily routines and feel insecure about their daily lives, Trump, pushing for a reopening, might be perceived as the only political leader able and willing to bring back routines and re-introduce a sense of ‘normality’. This factor could be a game-changer for Trump.

Trump’s response to recent Black Lives Matter protests, ignited after the police in Minneapolis killed George Floyd on 25 May, is an example of how populist leaders can deliberately trigger feelings of insecurity to generate public support. These protests have provided Trump with the opportunity to benefit from the perceptions of Whites in the US that their routines have been disrupted and that they are no longer safe.

Photo by Charles Deluvio on Unsplash

Following the widespread protests which erupted in the wake of George Floyd’s killing, Trump quickly adopted a security-oriented approach. In one instance Trump, borrowing a phrase from late Miami Police Chief Walter Headley, tweeted “…when the looting starts, the shooting starts”. Similarly, following property damage in New York, he argued: “We have to dominate the streets. You can’t let that happen what happened in New York City. The damage they have done. […] You know who dominated the streets? People that you don’t want to dominate the streets and look at the damage they did”. Another recurring theme is Trump’s claim Democrats want to defund and abolish police departments.

As these statements illustrate, Trump is responding to the protests in a manner that plays into people’s concerns about their own security. Moving forward, moreover, he will prioritize a security-oriented approach and present himself as the “law & order” president acting as a voice for ‘the silent majority’.

A Play for the ‘Silent Majority’

Trump is now promoting a narrative that the November elections are not simply a choice between a Democratic and a Republican candidate, but between a leader who would protect ‘decent Americans’ and their way of life or a candidate who does not care about ‘decent Americans’ with former Vice President and Democratic nominee, Joe Biden, cast in the latter role. Trump therefore reduces the whole presidential election to a zero-sum game.

Accordingly, and as reflected in two recent polls by Monmouth University and NBC News showing over 90 percent support for Trump among Republicans, Trump’s supporters appear to view the November elections as vital for the protection of their lifestyles, their well-being and their security. Such high polling numbers also suggest that many are comfortable with his attacks on those his supporters perceive as attempting to dilute Republican ideas: Democrats, people of color, migrants and LGBTQ+ communities.

These high numbers of support for Trump among Republicans may be a sign that they are more likely to go to the polls than Democrats. If that’s the case, then Joe Biden and the Democratic Party will need to find ways to boost Democratic turnout if they want to win the White House in November.

Posted In: 2020 Primary Primers | Elections and party politics across the US | Osman Sahin 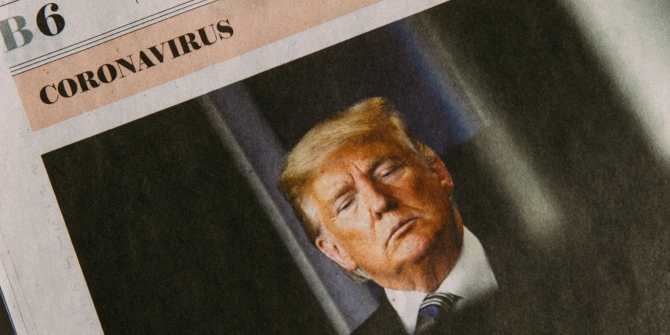