How can we explain Donald Trump’s appeal to so many Americans? During and soon after the 2016 Election campaign Kusminder Chahal and Harris Beider interviewed more than 400 Americans in five US cities who considered themselves to be white and working class. Through their conversations they were able to decipher the contours, consistencies and contradictions of peoples’ views on the changes occurring in the US, and how Trump has been able to create an attractive narrative of representing the ‘silent majority’.

The 2020 US election campaign is being played out in the shadows of the continuing global response to COVID-19 and more recently, the Black Lives Matter protests which have resulted after  another police killing of an unarmed black man, George Floyd. His death has sparked  worldwide protests and led to wider conversations on race and representation. The reactions to George Floyd’s death raises an uncomfortable truth that the 45th President of the US is not willing to denounce acts of state and systemic racism. Instead it appears he has used the current protests as a political opportunity to weaponize his support base. A support base that in 2016 was described by Trump as white working class, the left behind, and who by supporting the anti-Clinton elitist candidate would  Make America Great Again.

Donald Trump, campaigning for a second four year term, declared at the Tulsa rally on June 20th, 2020 that ‘the silent majority is stronger than ever before’. Trump’s rhetoric centres around the idea that an undefined, invisible sleeping giant has been re-awakened and been quietly energised by his  entry into national politics, the campaign to Make America Great Again, his 2016 election victory and more recently his stance on law and order in opposition to the protests and demands made by Black Lives Matter.

Our research began in the US in September 2016, exploring the views and perspectives of white working-class people on race, identity and change in five cities. Our fieldwork dovetailed with a pivotal moment in US history; the election of a property developer and media celebrity to the highest political position in the ‘free world’. In our book we argue that for many of those we interviewed Trump clearly represented the public voice of private disenchantment but also of a partisan hope. 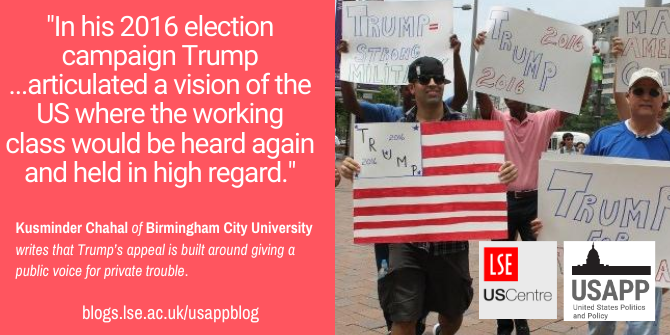 Our new book, ‘The Other America: White Working Class Perspectives on Race, Identity and Change’ shows that  the idea of a  ‘white working class’ is not stable, pre-formed, or ahistorical  but a fluid, nuanced, complex and historically contingent segment of US society. We recognised in these conversations that ‘white’ was always  dropped from ‘white working class’ very early in the discussions because ‘race’ is often seen as ‘other’ people. The tight and competing policy and academic definitions of what it means to be working class were at odds with how this group of people across the US interpreted their understanding of working class.

The lived experience of being white working class in the US has material and social implications which was expressed through the loss of time particularly with family because of long hours and multiple jobs; being the precariat; living with economic uncertainty, inflexibility and insecurity of work. The values that grow from the logic of this lived experience were expressed and felt as more important than the measurements currently used to describe class. People we interviewed articulated working class values as being hard work; honesty and trust; support and reciprocity; and pride and humility.

In his 2016 election campaign Trump tuned into some of these values and articulated a vision of the US where the working class would be heard again and held in high regard. In our research that sentiment was formulated by people we spoke to through metaphor:

“We need a David to [slay] Goliath…. I thank God has given us our David and we should put him in and let him take the giant down” (Bay Ridge FG).

We feel muzzled. We feel there’s a chokehold on [the] throat of white people and white working-class people. We can’t even say what we feel. That’s the reason I voted for this guy, because he’s actually saying this stuff that many people across America are thinking.’ (Tacoma FG)

The ‘many people’ could be read as the ‘silent majority’, who in turn do not have a voice. Trump, it was said, understands this and is willing to speak out. In our research, Trump represented a voice, one that was willing to challenge the ideology of progressives, elites and global economic change. Trump personified a public voice of private trouble; that is trouble described as discontent or disenchantment. Trump understood what sociologist Arlie Russell Hochschild calls the “deep story” of the silent majority. Our research found that Trump divided opinion, but he was able to effectively create a narrative that represented the ‘silent majority’ as the sociological other.

But there is another ‘deep story’ that our research highlights and that is premised on how we talk with each other, about what and when. Many people we interviewed remarked how in the past, they have not had such conversations about race, diversity, lived experiences and would welcome the opportunity to talk more. There was limited evidence of strong cross-racial connections. Our research highlights this paucity and recognises the need for new forms of leadership and building blocks for a country that right now needs consensus and dialogue, not confusion and demagogues.