Joe Biden’s narrow election victory in a year in which the US is experiencing high unemployment, a surge in coronavirus cases and climate induced threats signals a difficult period ahead. Richard Johnson examines the likely impact of a Republican-majority Senate and a conservative-majority Supreme Court on Biden’s policy agenda, especially in his first 100 days.

The 2020 election was close. It was close in the only way in which an election can be meaningfully said to be close – that a relatively small number of votes shifting a different way could have produced a different outcome. The now President-elect Joe Biden won the same number of electoral votes as Donald Trump four years ago, but by an even narrower margin. Biden’s Electoral College majority rests on about 45,000 votes across three states, making 2020 is the second closest election in over four decades.

Biden’s popular vote win, of course, was substantial. With votes still being counted, Biden won 51 percent of the vote and a margin of about 5.5 million votes over Trump. This is a major achievement, and it represents a clear majority mandate for the president-elect. However, these figures do not show that there has been the clear repudiation of Donald Trump by American voters that many commentators had expected. Biden did better than Hillary Clinton, but Donald Trump also generally outperformed his 2016 result. Trump won a larger share of the popular vote and improved his support across many demographic groups from four years ago. These outcomes are important – they will have a real impact on how Biden will be able to conduct his presidency over the next four years.

What explains Biden’s majority was not a mass movement of disgusted Trump voters to the former vice president. Joe Biden owes his popular (and electoral college) margins to the unification of the anti-Trump electorate. In 2016, 5.7 percent of voters supported third party candidates. In 2017, only about 1.8 percent did, based on the latest returns. Of those who voted third party last time, 60 percent reported switching their vote to Biden, compared to only 25 percent switching to Trump. 92 percent of 2016 Trump voters stuck by their candidate, and 40 percent of first-time voters voted for Donald Trump.

If Biden’s Electoral College victory was not as convincing as some had expected or predicted. Democrats’ performance in the congressional elections was even more of a disappointment. Democrats lost about half a dozen seats in the House of Representatives, when most commentators had predicted substantial gains. These sunny prognostications never felt plausible to me. The House of Representatives district boundaries were redrawn in 2011, shortly after the Republicans secured historic gains in state legislative elections, winning some chambers for the first time since the nineteenth century. Republican legislators drew boundaries which are highly unfavourable to Democrats. In 2012, Democrats won the popular vote in the House elections by over 1 million votes, but the Republicans retained their majority. Four years ago, when Hillary Clinton won the popular vote, Republicans held the House. Under these unfavourable boundaries, it’s a wonder that the Democrats have a majority at all. Democrats failed to reverse Republicans’ grip on state legislatures in this year’s election; Republicans will control at least 29 state legislatures next year. This result enables them once more to draw both state and federal legislative districts in many states with relative impunity. The Supreme Court gave its blessing to partisan gerrymandering in the 2019 case Rucho v Common Cause.

How the Republican majority Senate may limit Biden’s policies

The Republicans look likely to hold the Senate, assuming the Democrats are unable to gain two Senate seats in Georgia in run-off elections in January. The failure to gain control of the Senate will be a major constraint for the Biden presidency. Biden will be the first president since George H W Bush in 1989 to lack a Senate majority in their first one-hundred days in office. A divided government means that Biden’s ability to pass any meaningful left-of-centre legislation is almost impossible. Do not expect a reversal of the Trump tax cuts, 80 percent of the benefits of which went to the top 1 percent of earners. Biden will not be able to pass meaningful climate legislation, fundamentally reshape America’s immigration system, or pass public healthcare. 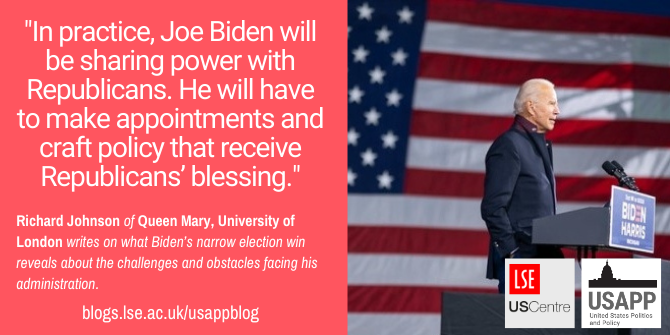 The changing of the guard in the White House is significant, however. Donald Trump, seemingly by choice, tended to use his executive branch powers to implement policy change, rather than seeking legislation even when he controlled Congress. This means that many of Trump’s policy changes are easily reversable by the stroke of President Biden’s pen. Biden will be able to reverse Trump’s orders on immigration, environmental regulation, and international agreements.

Should Senate Republicans wish to do so, they could potentially prevent Joe Biden from staffing his own administration. Thousands of executive branch appointments, including the Cabinet, must be confirmed by the Senate. Without Senate support for his nominees, Biden would be forced to ask figures from the Trump administration to stay in post, or he would have to rely on ‘acting’ executive branch officials, weakening his ability to steer clear change through the executive branch.

It is not clear that the Republicans will try to impose a total blockage on Biden’s executive branch appointments – although, it’s likely they will do so when it comes to appointing federal judges. Instead, moderate Republicans, like senators Mitt Romney (UT), Susan Collins (AK), and Lisa Murkowski (ME), could provide Biden with the necessary votes to shepherd through his appointments. In effect, these Republican senators will be the gatekeepers of the Biden administration. Do not expect an administration which incorporates many figures from the left of the Democratic Party.

However, a Biden presidency may not have a free hand, even with his executive actions. Donald Trump’s most enduring legacy will be his transformation of the US federal judiciary. With the replacement of Ruth Bader Ginsburg with Amy Coney Barrett just before the election, the Supreme Court is now further to the right than at nearly any other time in post-World War II history. The Supreme Court may choose to intervene to limit what Joe Biden can achieve through his executive powers, especially if they face resistance from Republican state governments.

In practice, Joe Biden will be sharing power with Republicans. He will have to make appointments and craft policy that receive Republicans’ blessing. He will have to ensure that he uses his executive branch powers sparingly, to avoid Supreme Court and state government rebuke. For all the talk of a second FDR and the transformational policymaking and societal reshaping that that comparison implies, Biden’s presidency looks like it will more closely mirror the last two years of the Obama presidency – constantly thwarted by a Republican Senate, but with an even more hostile Supreme Court.