The COVID-19 pandemic meant that voting by mail was more important than ever during the 2020 US General Election. Though it generally worked well, Priscilla Southwell argues that issues such as the rejection of so-called “naked” and “cured” ballots by Republicans show that there are still important areas for improvement.

In October I highlighted that the COVID-19 pandemic was enabling many Americans to change the way they would vote in 2020 from in person to mail balloting. I argued that, despite significant scaremongering, there was little evidence voting by mail increased fraud. Instead, I underscored that a body of academic work has shown it can increase voter safety and make it easier for voters from both parties to vote.

Reflecting this, vote by mail worked quite well in the United States during the 2020 General Election. A few ballots were misprinted, and had to be resent to voters, and the potential slowdown in mail service was a concern. Despite these issues, estimates suggest that voter turnout was 66.6 percent, the highest since 1900. The two main reasons for this increase in turnout are the perceived closeness of the presidential race, especially in “battleground” states, and the expanded opportunities for vote-by-mail ballots due to COVID-19. This is consistent with my previous research, and that of others, that has suggested that vote-by-mail boosts turnout in presidential and special elections.

The “cloud” behind this increased voter turnout is that voter suppression has continued to occur, and has regrettably increased in response to the anticipated rise in vote by mail ballots.

The traditional methods of voter suppression are as follows:

While these voter suppression methods are alarming, at best, I am most concerned about a new set of vote by mail suppression tactics. In this new dimension of suppression, registered voters in the US may be allowed to vote, even given the obstacles listed above, but their vote may not be counted.

Challenges for mail in ballots

In August, the US Postmaster General, Louis DeJoy announced budget cutbacks to the US Postal Service (USPS), including a reduction in employee overtime hours and the elimination of postal-sorting machines. Although he later suspended these cuts, it did cause concern among vote by mail voters that their ballot might not be received in time to be counted.

On November 3rd, Election Day, the USPS reported that 300,000 ballots were missing. That is, these ballots were scanned upon entry to the post office, but no exit scan was apparent. A District of Columbia judge subsequently ordered a twice-daily sweeping of post offices in the affected states, and later complained that this process was incomplete or slow.

Most importantly, there was widespread ‘rejection” of vote-by-mail ballots. So-called “naked” ballots – those without a secrecy envelope or sleeve – were not counted in several states, including Pennsylvania – the state in which numerous lawsuits have been filed since the election. 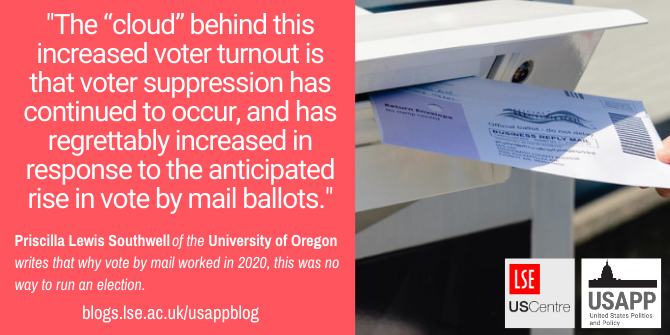 However, the current controversy is not over the counting of such “naked” ballots, as the Pennsylvania Supreme Court ruled in September of this year that such ballots should not be counted. The issue is the “notice and cure” aspect that the Secretary of the Commonwealth issued to Pennsylvania counties. Specifically, if an election official noticed that a ballot was missing a security envelope, or had a missing or invalid signature on the outside mailing envelope, then the voter could be notified of this error or omission, and be allowed to “cure” or “fix” this ballot.  Some observers, particularly Republicans, felt that this curing of ballots was not evenly applied in all counties. This is one of the main aspects of the current lawsuit in the Commonwealth of Pennsylvania.

I should note that in my own state of Oregon, the secrecy envelope is optional, and therefore its omission does not make the ballot invalid. Furthermore, if there is a missing or invalid signature on the outside mailing envelope, the voter is then contacted, as happened to two of my close relatives in this election.

How we can improve future elections

Looking forward, there are two important strands that individual citizens, communities, political parties and policy makers need to reflect upon and feed into the planning for, and administration of, future elections.

Civic Response: This is no way to run an election, especially in those states that did not accommodate voters who had made minor errors AND were using vote by mail for the first time. What defense could be provided against any party or group that wants to make it more difficult for legitimate registered voters to cast their ballots?

Strategic Response: When you suppress voters, or votes, do you also suppress supporters within your own party or group? If so, this tactic may come back to haunt you in this election and beyond.

Given that the 2020 election cycle will continue with Senate runoff elections in Georgia in early January, the need for reflection in the near term is paramount.