The 2020 election saw the Democratic Party re-take the White House and the United States Senate and hold control of the House of Representatives. In the months that have followed, Republican-controlled state legislatures have proposed more than 200 bills which would roll back voting ability and access. Michael Latner, Alex Keena, Anthony McGann and Charles Anthony Smith give an overview of these measures, and look at the For the People Act as Congressional Democrats’ best chance to protect voting rights.

In the wake of record turnout in the 2020 election and the success of the Democratic Party winning control over the presidency and both houses of Congress, Republican lawmakers in state legislatures across the country are proposing to scale back ballot eligibility and access to voting at a level not seen since the end of Reconstruction. As the Brennan Center, Voting Rights Lab and Washington Post have documented, over 200 restrictive bills have been introduced across the states, more than a seven-fold increase compared to this time last year.

This is a coordinated, well-funded, national effort. Building on research in our forthcoming book Gerrymandering the States: Partisanship, Race, and the Transformation of American Federalism (Cambridge University Press), we see this as part of a grand strategy by Trump loyalists and state Republican legislators to entrench themselves and hold onto power, effectively through minority rule. Of course, this is not the first group of declining elites to adopt such a strategy. And while we have seen these tactics deployed for more than a decade, the sharp rise in their use suggests that we have reached a turning point in our democracy. If these laws are enacted, state legislatures dominated by these partisans could effectively determine which party controls Congress every ten years, instead of the people of the United States making that decision every two, and they may well determine the outcome of presidential contests every four years. Just what would these bills do, and what can be done about it?

Many of these proposals would increase barriers to voter eligibility. Several states, including Arizona, have proposed new “proof of citizenship” requirements. Texas has similarly proposed stripping authority for voter registration from county clerks to hand it over to the Department of Public Safety, for citizenship verification. Previous court cases have shown that such laws are better at keeping eligible voters off the rolls than prohibiting nearly non-existent voter fraud.

About half of the restrictive proposals concern vote-by-mail, which pseudo election experts claim is part of a “left-wing” agenda, despite its having been universally implemented in Utah, the most Republican state in the Union. What these legislatures really want is to reduce the range of options for voting, because they know that having more options increases turnout. In addition to adding ID or witness requirements to obtain an absentee ballot, several of the most competitive states (AZ, GA, PA) are seeking to limit who can vote by mail. Florida also wants to limit the use of ballot boxes, in addition to making it harder to vote absentee. Georgia legislators even suggested restricted Sunday early voting, the traditional day that African-American churches mobilize voters with “souls to the polls” events.

Sadly, the words of state representative and Georgia state Democratic Party chairwoman Nikema Williams are ringing true beyond her own legislature: “Republicans voted as a caucus to enact the most blatantly racist attacks on voting rights in the South since Jim Crow, after losing an election they planned, built and oversaw.”

State legislatures have even attempted to usurp sovereignty straight from their constituents. One Arizona bill would allow the state legislature, by majority vote, to select electors to the Electoral College, regardless of voters’ preferences. Other GOP lawmakers are a little more subtle, such as those in New Hampshire and Wisconsin, who propose to allocate electors by Congressional district. As we demonstrated back in 2017, such a move in several battleground states would give a further advantage to the Republican candidate due to partisan gerrymandering. 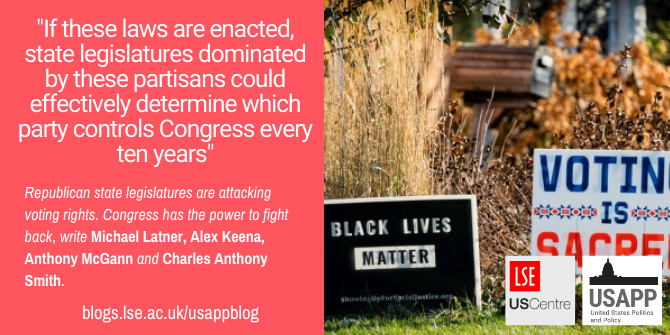 “Voting is Sacred – Black Lives Matter” by Tony Webster is licensed under CC BY NC 2.0.

Will Congress fight back? The For the People Act

What began as a Democratic “messaging” bill in the last Congress, HR1, the For the People Act, is now possibly Congress’ best chance to stop these state legislatures from encroaching on voting rights and subverting the constitutionally prescribed balance of power between state and federal government. While renewal of the Voting Rights Act and passage of the Fair Representation Act would restore legal protections against racial voter discrimination and greatly improve partisan competition, the For the People Act goes further by establishing national standards that would directly thwart these voter suppression efforts: automatic and same-day voter registration and related election modernization procedures; protections against registration list purging; vote-by-mail and early voting protections; protections for voters with disabilities; and the establishment of independent redistricting commissions.

Additional election protections include public financing measures, ethics standards and a number of other important provisions. Senate hearings on the bill start today, and there will be changes from the version passed in the House. The bill is huge, and needs work. But this is not the time to water down crucial eligibility, ballot access and redistricting protections. If we are correct in our assessment, there is little hope of getting the 60 votes necessary to overcome a filibuster. Republicans already hold a representational advantage, with smaller states having relatively more power in the US Senate due to malapportionment in that chamber. The consequence is that a white minority adverse to voting rights can kill legislation that would empower voters of color across the country. With all of the exceptions that have already been carved out, Americans should not allow the filibuster to buttress a powerful minority intent on restricting civil rights, as it historically has. Senate procedures should, once and for all, forbid the use of the filibuster against legislation concerning those rights.

The Senate has a brief opportunity before 2022 to defend voting rights and reaffirm its constitutional principles. Congress, the scene of a violent attack that disrupted the peaceful transfer of power only months ago, should have the courage to fight back.