Taxi drivers in the United States pay upfront to buy or lease a medallion and keep the fares for themselves. With Uber or Lyft drivers, instead, no medallion is required, but they must pay a proportion of the fares to the ride-share companies. Sydnee Caldwell and colleagues conducted a series of experiments and found a strong aversion to the medallion lease model among drivers: 81% of them would prefer paying a 25% fee to paying a $200 weekly lease.

One difference between American taxi drivers and their ride-share counterparts is how they are paid. In most large American cities, taxi drivers must own or lease one of a limited number of taxi medallions to have the right to drive. Most choose to lease a medallion by the shift, day, or week. After paying the lease, these drivers can drive as much or as little as they want, keeping all the fares they collect. By contrast, drivers who drive for ride-share companies, such as Uber or Lyft, typically pay nothing up-front. Instead, some of the fares they collect go to the ride-share company (proportional fee model).

In a recent paper, Joshua Angrist, Jonathan Hall, and I compared the economic benefits and costs of the taxi and ride-share compensation models. Specifically, we asked how much Uber drivers must be compensated for the loss of ride-share work opportunities (i.e., the loss of the proportional fee model) if the goal is to leave them as well off as they were before. Some drivers prefer the taxi model and therefore do not need compensation. However, these make up a small minority of ride-share drivers. For the average driver, the compensation required to make them whole is large, as a fraction of weekly earnings.

The contrast between lease-based and proportional fee models also appears in other settings. For example, while some hairdressers and beauticians rent chairs by the day or week, others give a portion of their income to the salon. Some franchise owners pay fixed royalty fees, while others pay royalties that are proportional to sales. Our analysis provides a framework that can be used to evaluate the relative benefits of these models.

Two parameters govern this rideshare—taxi trade-off. The first, the labour supply elasticity, tells us how hours respond to changes in wages. All else equal, a taxi driver’s hourly wage is higher because he/she does not pay a proportional fee on each trip. If a driver works longer hours when wages are higher, they are more likely to see a benefit to leasing.

The second parameter governing this trade-off is something we call lease aversion. Lease aversion is analogous to what behavioural economists often call loss aversion. This captures the extent to which drivers are averse to the gamble implicit in the decision to buy a lease. Drivers who take the taxi contract bet that there are enough fare opportunities to earn more than they would have under the default scenario, the proportional fee. This gamble may not pay off if the driver is unable to drive for personal reasons (for instance, if they are sick), or if rider demand is low.

We conducted a series of experiments to estimate the value of the ride-share compensation model. In these experiments, we randomly assigned reductions in the Uber fee to a large sample of Boston Uber drivers. Uber has changed how it compensates its drivers since we ran our experiments. However, at the time, most drivers in Boston faced a fixed 25% fee. Our fee reductions provided these drivers with the opportunity to increase their earnings by roughly a third.

We found that drivers responded sharply to changes in their hourly earnings. A ten percent increase in hourly earnings caused them to drive about 12 percent more. This was true for drivers who typically drove a few hours each week (5-15 hours/week), and for drivers who drove more regularly (15-25 hours/week). Figure 1 shows average driver behaviour the week before our fare increase, the weeks of treatment (a random half received the treatment in wave 1, the rest in wave 2), and the week after treatment. This figure reveals that there was a large increase in hours when the treatment was in effect, with little effect on the hours worked in the week before or after treatment. 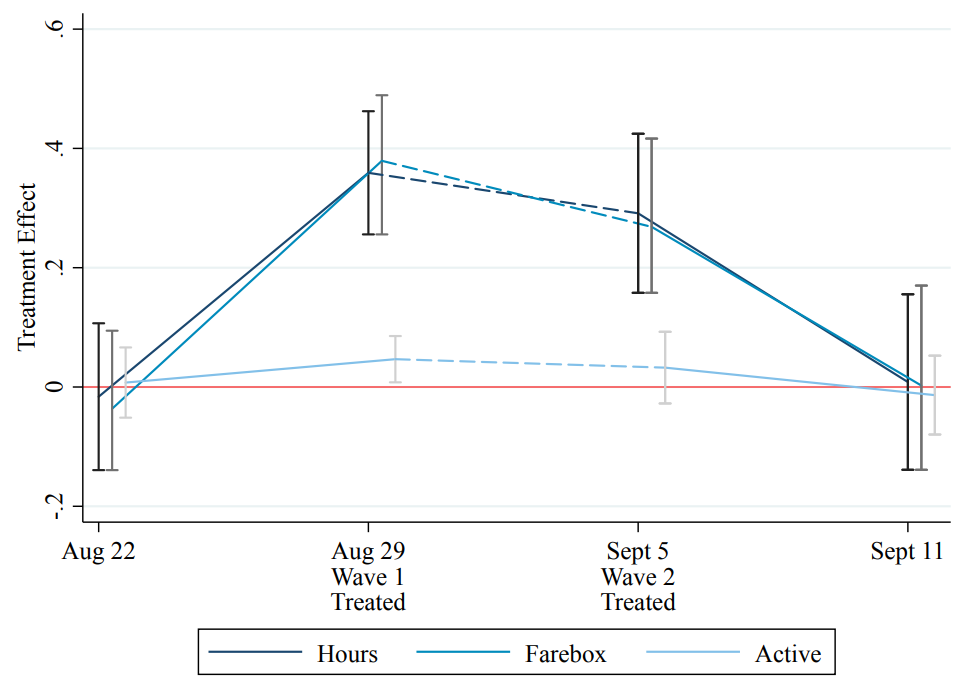 Our taxi experiments revealed that many drivers who would have benefitted financially from our offers failed to take advantage. For drivers who drove during the treatment week, the average expected financial benefit—after taking into account the cost of the lease—among those who did not accept our taxi offer was $115 (see Table 6 in the paper).

Simple inattention (not seeing or ignoring our messages) does not explain the patterns in the data. If a fraction of drivers simply ignored our messages, we would see that our predicted and observed opt-in rates would differ by a fixed fraction across all treatment groups. Instead, we see that gaps are larger in groups that faced larger virtual leases. Opt-in decisions are those we’d expect when drivers behave as though the offered lease is forty per cent more expensive than it actually is.

Our experimental results suggest that drivers in our sample—active drivers in Boston in 2016—would have to be paid an average of $445 to move to a $400/week leasing scheme from a 25% proportional fee. This is more than the size of the lease! Even with more modest lease payments, most drivers need compensation. For example, after taking into account drivers’ lease aversion, 81% of drivers would prefer paying a 25% fee to paying a $200 weekly lease.