Last month, Canada held its second election in less than two years as Liberal Prime Minister, Justin Trudeau sought a new mandate during the COVID-19 pandemic. But Trudeau’s gamble that Canadians would reward his party for its handling of the pandemic did not pay off, and he now still leads a minority government. Using new survey data, Harold Clarke, Thomas J. Scotto and Marianne C. Stewart find that while Canadian voters did approve of the government’s pandemic response, concerns about its handling of the economy and inflation deprived the Liberal party of an election majority.

On August 15, 2021 Canadian Prime Minister Justin Trudeau announced the county’s 44th federal election Criticized for calling what his rivals and many commentators saw as an expensive and unnecessary return to the polls after less than two years, Trudeau justified his decision in terms of obtaining a fresh mandate to address the continuing COVID-19 pandemic: ‘Canadians need to choose how we finish the fight against COVID-19 and build back better, from getting the job done on vaccines to having people’s back all the way to and through the end of the crisis’. When the election was held 36 days later, the electorate delivered almost the same underwhelming mandate as it had two years earlier with vote shares and the distribution of seats virtually unchanged. With 32.4 percent of the vote the Liberals captured 159 of the 338 seats in Parliament, while the principal opposition party, the Conservatives, attracted 33.7 percent of the vote and won 119 seats. Since his party won a plurality of seats, Trudeau would remain prime minister, heading another minority Liberal government.

COVID-19 was important, but was not the only issue on voters’ minds in this election

Trudeau had wagered voters would reward him with a majority because of how his government handled the COVID-19 crisis and the steps, including vaccine mandates and passports, he promised to take going forward. Using data from a national post-election survey conducted by Abacus Data, we investigate how the COVID-19 pandemic influenced voting for Canada’s two major political parties. These data indicate that the COVID-19 issue played politically much the way Trudeau expected. However, there were other important forces at work. Voters’ reactions to the Covid-ravaged economy were especially important.

Figure 1 shows that COVID-19 was selected most frequently by those surveyed as an important issue, but the numbers were not overwhelming—50 percent selected it as a ‘top three’ issue and 31 percent said it was the single most important one. Other issues, including inflation, health care, the environment and the economy all claimed the attention of substantial minorities. These are what those who study polls and polling call ‘valence issues’ upon which virtually everyone agrees about the ends of public policy and political debate focuses on ‘how to’ and, especially, ‘who is best able’. 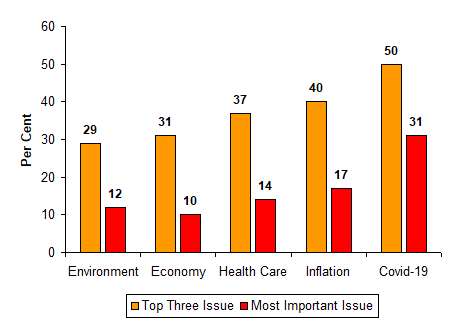 Voters saw Trudeau’s liberals as strong on COVID-19, but weaker on the economy

Research in Canada, Great Britain and other mature democracies documents that party preferences on the economy and other valence issues heavily influence electoral decisions, with voters using their partisan identifications and images of party leaders as cues to inform those preferences. In 2021 Canadians’ judgments about which party was best to deal with various valence issues varied widely. As Figure 2 shows, Trudeau was correct to bet that that the Liberals would be seen as best on COVID-19—44 percent of the survey respondents chose the Liberals and only 19 percent selected the Conservatives. The Liberals also enjoyed large leads on health care and the environment. By contrast, however, the Conservatives led the Liberals by 30 percent to 24 percent on inflation and by 40 percent to 29 percent on the economy. 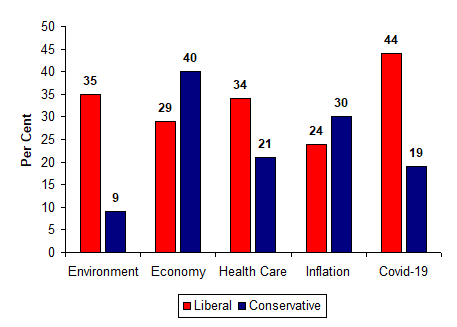 As the governing party in Ottawa, the Liberals’ weakness on the pandemic-battered economy was not surprising. When the 2021 election was called, inflation had increased to 4.1 percent on an annual basis and housing prices in most urban areas had reached historic highs. Reflecting the federal government’s efforts to soften the serious economic damage to individuals and businesses that the pandemic wrought, the annual deficit had ballooned to $314 billion (Cd) from $22 billion a year earlier. Unemployment was in retreat after reaching nearly 14 percent during the first wave of the pandemic in May 2020, but it was still over 7 percent when the election was called. 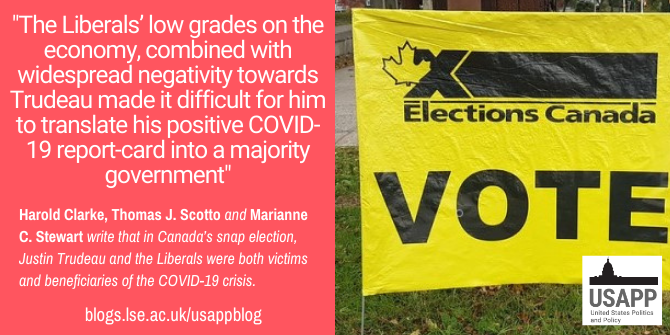 Trudeau clearly wanted to frame the election campaign narrowly around how his government had protected Canadians during the pandemic, but the economic fallout from the crisis was difficult to ignore. Many voters were concerned and when asked about economic conditions a clear majority (57 percent) responded negatively. Similarly, a majority (54 percent) gave the federal government a failing grade for its stewardship of the economy. Conservative Leader Erin O’Toole recognized the political opportunity these negative judgments presented and made sound economic management and the restoration of prosperity key themes of his campaign.

A Liberal majority remained elusive, despite an image edge

Partisanship and leader images were not Liberal strengths either. The Abacus survey reveals that the Liberal share of party identifiers was 29 percent, only 1 percent greater than that for the Conservatives. Similarly, although pre-campaign polls indicated Trudeau enjoyed a substantial ‘image edge’ over his Conservative counterpart, before the campaign began, the gap between the two leaders narrowed once the election was underway. In the Abacus post-election survey nearly half (48 percent) of the respondents had a negative impression of Trudeau whereas only 38 percent viewed him positively. The comparable numbers for O’Toole were 34 percent and 42 percent, respectively.

The Liberals’ low grades on the economy, combined with widespread negativity towards Trudeau made it difficult for him to translate his positive COVID-19 report-card into a majority government. Multivariate statistical analyses bolster this conclusion showing that both leader images and perceptions of party best on the important issue had strong effects on Liberal support controlling for several other predictors including partisanship, left-right ideology, and socio-demographic characteristics (age, education, gender, income, region, urban-rural residence). 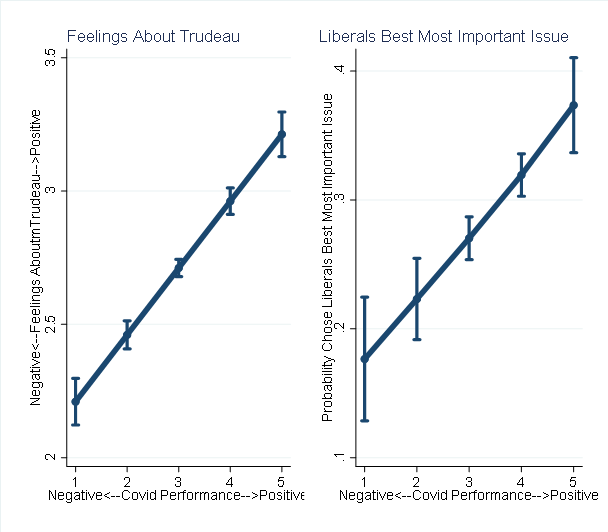 Trudeau was correct to think that the COVID-19 issue would work in his favor. Voters’ judgments about the federal government’s handling of the crisis strongly affected whether they thought the Liberals were best on the most important issue and their image of Trudeau (see Figure 3). The probability of selecting the Liberals on the most important issue climbs from .18 to .37.as judgments about the government’s handling of the crisis move from negative to positive. Similarly, impressions of Trudeau move from 2.2 to 3.2 on a 5-point negative to positive scale as evaluations of the government’s COVID-19 response become more sanguine. 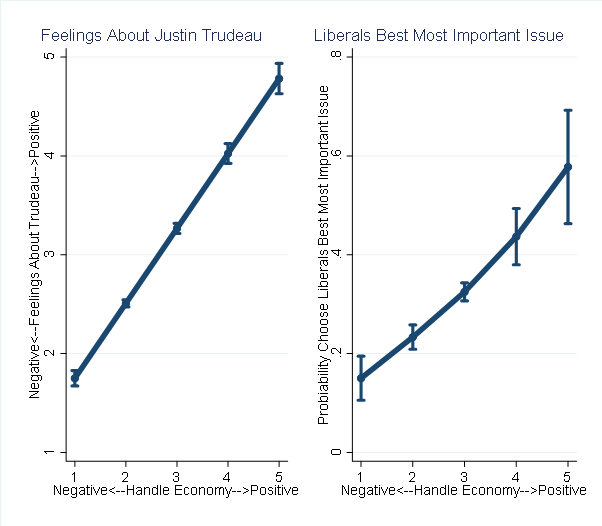 Are Best Able to Handle Most Important Issue

However, evaluations of the government’s economic performance were also very influential. As these evaluations become increasingly positive, the probability of selecting the Liberals as best on the most important issue increases strongly from .15 to .58 (see Figure 4). Trudeau’s image also improves, rising from 1.8 to fully 4.8 on the 5-point leader image scale. A major problem for the Liberals in 2021 was that many voters judged the country’s economy negatively and they held the federal government responsible.

Trudeau and the Liberals thus were both beneficiaries and victims of the COVID-19 crisis. Narrowly defined, the politics of the pandemic were such that the prime minister and his party benefited from steps they had taken or said they were about to take to address the crisis. After a slow start the federal government had orchestrated an intensive effort to get a large proportion of the population vaccinated. The vast majority of Canadians complied and also acceded to lockdowns and travel restrictions imposed to slow the spread of the virus. Many of these measures remained in place in various parts of the country when the 2021 election was called. As discussed, a substantial plurality of voters who designated the pandemic as their preeminent issue judged these government efforts positively.

But the survey data also testify that there was another side of crisis—pandemic economics. Decades of research in Canada and elsewhere document that the economy is an issue of great importance to voters, which has the potential to decide the fate of governments and their leaders. When Canadians cast their ballots on September 20, 2021 sharply rising prices, high unemployment rates, and a massive deficit were realities that many of them did not ignore, despite Trudeau’s efforts to focus campaign debate on his government’s continuing efforts to combat the health risks posed by COVID-19. These efforts and the sporadic insertion of ‘wedge issues’ such as gun control and abortion into the campaign conversation did not prevent widespread worries about the ailing economy. The result was that the politics and economics of the pandemic combined to keep the governing Liberals and their Conservative rivals right where they were when the election campaign was called.