Despite losing the 2020 presidential election, Donald Trump is still the Republican Party’s center of gravity. David W. Wise writes that while Trump may be in a strong position to win the 2024 election, by continuing to support him, the GOP may be sacrificing the party’s long-term electoral prospects.

In the immediate aftermath of the January 6, 2021 assault on the US Capitol it was possible that a bipartisan censure of President Trump could have been passed in Congress. Senate Majority Leader Mitch McConnell was quite clear in placing blame on the president, and House Minority Leader Kevin McCarthy proposed a censure.

Instead, Speaker Nancy Pelosi wasted precious time passing Articles of Impeachment that had no chance of getting 67 US Senate votes to convict. During that interlude Republican Senators had time to feel constituent anger and to worry about getting primaried.

When the Articles were finally delivered to the Senate on January 25th, any chance of a bipartisan censure had come and gone. Battle lines had been drawn. Those same Senators were then forced at the conclusion of the impeachment trial go on record whether they were or were not “with Trump.” Trump’s position as the center of gravity in the party was confirmed.

Although Trump lost the popular vote in 2016 and 2020, these margins can give a false sense of Trump’s upcoming electoral chances given how a president is actually elected, and it would be as foolish to discount his prospects in 2024. A large part of the popular vote total for Democrats comes from California, which runs up the party’s share of the vote country wide. However, in 2016 Trump received 1.4 million more votes than Hillary Clinton in the rest of the nation beyond California. Presidential elections are determined by the Electoral College where national candidates must win a majority in each state to win its electoral votes (Maine and Nebraska use a slightly modified system), with the ‘extra’ votes beyond this majority effectively not contributing. The Electoral College result would remain unchanged even if the Democratic candidate received all 17 million votes in California. 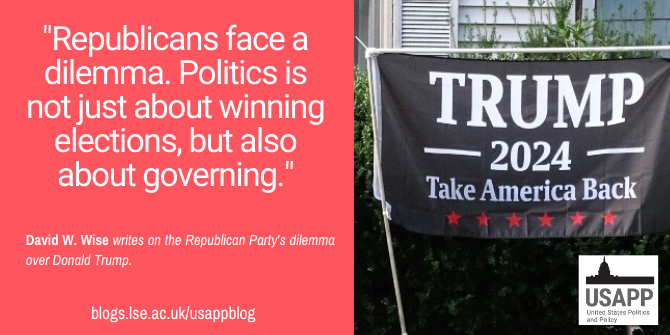 Republicans face a dilemma. Politics is not just about winning elections, but also about governing. A president whose strategy is to win with a minority of the popular vote and while in office is then content playing only for applause from his committed base is a threat to a party with an electorate shrinking demographically. In pursuing a policy agenda, the goal should be to try to convince those who did not vote for you to support your initiatives. However, Trump is so polarizing that it makes this almost impossible as it leads one open to the charge of being “like Trump.”

Trump is also scorched earth even among his supporters if they do not fall into line. That person will be vilified and face the prospect of being primaried with some significant percentage of the 74 million who voted for Trump ready to deliver his vindictive judgment. This hardened core of support is the source of his power over the party. Now Trump is now calling for Republicans not to vote  in 2022 and 2024 if he does not get his way.

To those interested in the Republican Party’s longer-term prospects this freezes in place a younger generation of leaders like Florida Governor Ron DeSantis, South Carolina Senator Tim Scott, former UN Ambassador and South Carolina Governor Nikki Haley, Missouri Senator Josh Hawley, and South Dakota Governor Kristi Noem. Yet all these candidates would pursue the same agenda in a less abrasive but more effective way. Perhaps the greatest fear is that if Trump does not run that he will undermine the eventual nominee through his incapacity to share the spotlight with anyone else. And those who are interested in the health of the American political system itself there is that “matter” of Trump’s repeated claims that the election was stolen and to the undemocratic attempt to overturn a certified election without any evidence to support that claim. Democracy depends on the gracious consent of the defeated.

In the past 120 years only two Republican presidents have been elected twice with a majority of the popular vote each time: Dwight Eisenhower and Ronald Reagan. Both men were affable and sought to work across the aisle. While Trump looks backward fueled by grievance, Ronald Reagan spoke with optimism of “morning in America” and the potential of the “city upon a hill.” With Trump winning is entirely personal. To Ike and Reagan victory was to advance principles. In his ascent Trump hijacked the “party of Reagan.” While Trump properly focused attention on many critical issues that had been ignored by establishment elites, his embrace of those issues sought polarization, rather than to build consensus.

David W. Wise
David W. Wise is a retired businessman from Baltimore and a graduate of The Fletcher School of Law and Diplomacy, Tufts University.