Following the one-year anniversary of the January 6, 2021, US Capitol insurrection, Professor Peter Trubowitz looks at the state of American democracy. He writes that three intersecting debates about US democracy are now developing: over the US social contract, who will govern America and how, and over US global leadership.

As last week’s many reflections on the January 6 attack on the Capitol have laid bare, America remains a deeply divided country, its politics swirling with lies and half-truths, and with both sides questioning the legitimacy of the political system, albeit for different reasons. Today, there are three great intersecting debates unfolding in the United States where the core understandings of what kind of democracy America is, and should be, are very much up for grabs.

The debate over the social contract

One of these debates has to do with the social contract. Both sides, left and right, seem to agree that it is broken, but they offer different explanations for why, and different prescriptions for fixing it. For the many Republicans under Trump’s spell, it’s about a political system that is no longer delivering for Americans the way it did in the 1950s, when 89 percent of Americans were white, paychecks kept pace with productivity growth and immigration policy strongly favored the entry of Europeans. For Biden and Democrats more broadly, it is about a political system that is no longer delivering for working families the way it did when there was more regulation, greater social protection, and less inequality. This debate is playing itself out over Biden’s Build Back Better plan to create jobs which will stay at home, expand and reform the social safety net, and increase educational opportunities, just as it played itself out over Trump’s efforts to reimpose national control over trade and restrict the flow of immigrants, who now come primarily from non-European nations. 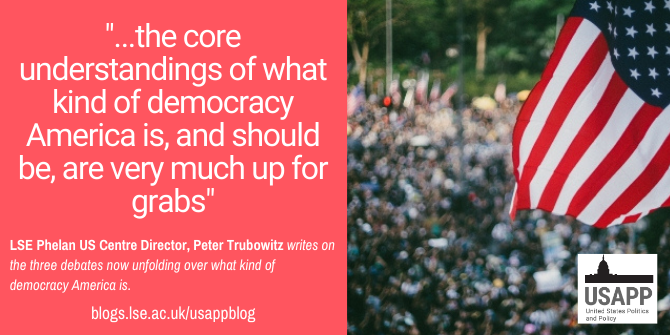 Photo by Joseph Chan on Unsplash

The debate over who will govern

The debate over the social contract is mirrored in a second great debate that has to do with the “rules of the game” and is most immediately about whose vote counts. It is being played out in state legislatures, the US Senate, and the Supreme Court. Joe Biden’s speech in Georgia this week, where he called for a carve-out in the Senate filibuster to pass pending federal voting rights legislation, falls into this category. So do the many state-level efforts by Republicans to curb voting access and chip away at impartial electoral management. Yet this is not only a debate about whose vote counts. It is also about which problem in America needs fixing — the one that Trump and his hard-core supporters stress or the one Biden and Democrats talk about. Those who think the core problem is America’s rapidly growing socioeconomic and cultural diversity favor limiting the franchise. Those who think it is about expansion of opportunity and inclusivity favor national voting standards. In short, the debate over the rules is a debate over who will govern America going forward, and how.

The debate over US global leadership

There is a third debate that is in no small part an extension of the first two. It has to do with foreign policy and is about whether the United States will continue to uphold the liberal world order. For Trump the answer was largely a no. In his view that order—and the liberal democratic values it enshrined—changed America in ways that eroded its sovereignty, diluted its identity, and sapped its will. Whether most Republicans leaders truly share this view is unclear: the record is mixed. For Biden, and most Democrats, there is a clear rhetorical commitment to strengthening the liberal order. How credible that commitment is to America’s allies, let alone to its adversaries, is very uncertain. The answer will depend a lot on whether Biden and the Democrats can put Donald Trump in the rear-view mirror by making meaningful progress on their vision of renewing the social contract and democracy at home. As we approach the one-year mark in Biden’s presidency, the jury is still out.