Noam Gidron (Princeton) (left) and Peter A Hall (Harvard) find that, over the past three decades, white working-class men in Western democracies feel they have lost social standing. People who lack social status tend to be politically alienated and to gravitate towards right-wing populist parties. While Donald Trump appealed directly to these people during his presidential campaign, the perceived fall in status probably increased support for Brexit in the UK. Redistributive policies will not be enough to stem this trend, because social status also depends on providing people with decent, well-paid jobs. But on a symbolic level, politicians also need to ensure that the less-educated feel they have a place and a voice in society.

The Brexit referendum exposed deep political divisions within British society, and more than a year after that vote, those divisions show no signs of disappearing.  Although the Leave campaign was carried to victory on the back of a broad coalition, one of its striking features was high levels of support for Brexit among white working-class men without a college education – a group that is also especially likely to vote for right-populist candidates in other countries.  Why is there such strong support for right-populist causes and candidates among the white working class?

However, we think that asking whether economic or cultural developments were more important to such outcomes is to ask the wrong question.  There are good reasons for believing that economic and cultural developments have operated together to increase support for populism. The more important question, then, is not whether populism is driven by either economic or cultural factors—but rather how economic and cultural forces might combine to shape the populist politics of our time.

In a recent article published in the British Journal of Sociology, we propose that one way to understand how economic and cultural factors interact is to see support for Brexit and right populism more generally among the white working class as a reflection of status anxiety rooted in broader processes of social marginalisation.  We support this argument using survey data collected across Western democracies between 1987 and 2014 as part of the International Social Survey Programme.

Our focus is on subjective social status, namely, a person’s sense that they are accorded the social respect or status associated with full membership in society. There are good reasons for thinking that economic and cultural developments have combined to depress the subjective social status of white working-class men.  Since social status is typically conferred by levels of income and the quality of one’s occupation, shifting patterns of employment that have eliminated well-paid, medium-skill jobs and forced many men into more precarious positions may well have undercut their own sense of where they stand in society.  At the same time, shifts in cultural frameworks, marked by an increasing emphasis in mainstream discourse on racial and gender equality, may have threatened the subjective social status of any who may have relied on the notion that they were white or male to underpin their own sense of social standing.

Thus, economic and cultural developments happening independently of each other may have combined to have additive effects on the social status of some groups.  But there may also be interactive effects at work here. For instance, movement toward a knowledge economy has increased the demand for highly-skilled workers and the wage premium to college degrees, putting people without such a degree at an economic disadvantage.  But, as more people acquire such degrees, the social esteem accorded those who lack one may well have fallen.  In this case, a particular set of economic developments sets in motion changes in cultural frameworks that multiply the effects.

If these conjectures are correct, we should expect to see some decline in the subjective social status of men without a college education over the past few decades, and that is what we find in this study of twelve developed democracies.  We measured social status using a question that asked survey respondents to place themselves on a social ladder reflecting whether they were closer to the top or bottom of society. In almost every country within our sample, men without a college education reported lower levels of relative social status in 2014 than they did two or three decades before. These declines were modest but remarkably consistent. 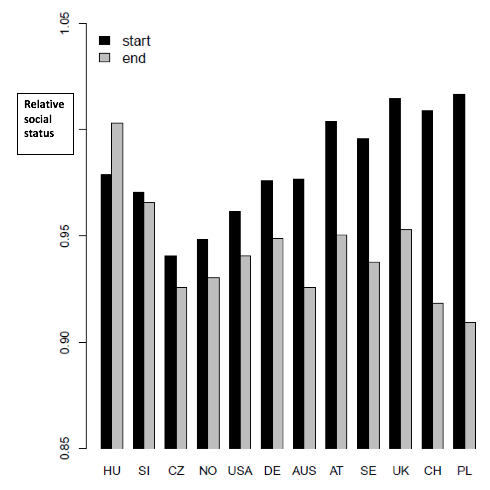 Is this decline in subjective social status reflected in support for the populist right? We think there are good reasons to believe it is.  Previous work in sociology has demonstrated that people care just as much about social status as they do about money. Thus, working-class voters who feel their social status is eroding may well turn against the mainstream parties who have presided over that; and they may well be inclined toward candidates who promise to restore that status, as many on the populist right do. Donald Trump appealed directly to such concerns, for instance, with language evident in this campaign speech:

These findings also carry implications for how the populist challenge can be addressed. Much of the current discussion is focused on providing better material compensation for the ‘losers’ of globalisation, often in the form of more generous programs of redistribution. Yet our research suggests that support for populism is not motivated primarily by demands for more redistribution but by more fundamental concerns about social recognition and respect. Since social recognition is closely-linked to having a decent job, addressing those concerns will require efforts to create such jobs and to make existing jobs more decent.  But it will also require efforts on the symbolic plane of political discourse to ensure that people in all walks of life are recognised as valued members of society.

Noam Gidron is a fellow at the Niehaus Center for Globalization and Governance at Princeton University. Beginning in 2018, he will join the faculty of the Department of Political Science and the Joint Program in Politics, Philosophy and Economics (PPE) at the Hebrew University of Jerusalem.

Peter A Hall is Krupp Foundation Professor of European Studies in the Department of Government, Harvard University, and at the Minda de Gunzburg Center for European Studies. 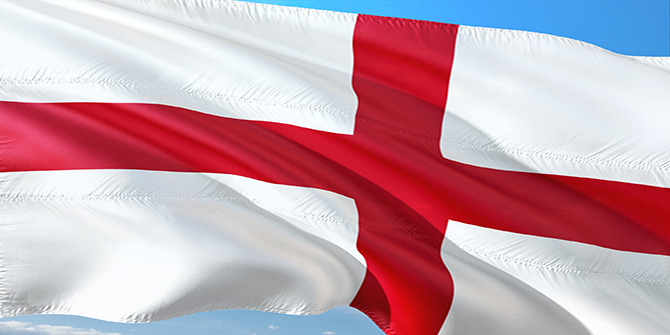