The Brexit vote was a challenge to Scotland’s regional autonomy. The country’s response has been to work towards removing itself from the source of its policy preference variation with Great Britain, writes Ryan Lux (University of Texas at Dallas). He argues that this can be explained by physical distance from the political centre, which is London. Both Northern Ireland and Scotland voted to remain in the EU while Wales and England steered toward a break from the institution, he concludes.

In international relations, it is commonplace to analyze the actions of a country by viewing that country as a singular actor. However, we know that multiple groups exist within any country that make up the national preferences. This issue is compounded when the government of a state has subnational governments underneath as the United Kingdom does. In recent interviews regarding the British withdrawal from the European Union, Scotland’s First Minister Nicola Sturgeon has argued for another Scottish independence referendum. In the 2016 Brexit vote, Scotland voted overwhelmingly in favour of remaining in the EU. We know that citizens increasingly desire regional control, yet at the same time, they also want the national policy to reflect their values. Scotland has clearly lobbied for increased regional autonomy over recent years, and been somewhat successful in this area. When an issue occurred that challenged this regional autonomy, the Brexit referendum, the Scottish response has been to work toward removing itself from the source of its policy preference variation with Great Britain.

Interestingly, the Welsh vote on Brexit was in line with the British vote. Figures 1 and 2 illustrate the vote percentage of each country for joining the European Community in 1975 and remain the EU in 2016 respectively. Both Scotland and Wales have sought increased regional control, yet clearly, they have different policy preferences. So then how can we reconcile these differing situations? Political parties are attributed as contributing to the desire for regional control, as evidenced by the dominance of the UKIP party during the Brexit vote. However, this potential explanation fails to account for another potential determinant, distance. Physical distance from the political center, London, may also have played a role, with both Northern Ireland and Scotland voting to remain in the EU while Wales and England steered toward a break from the institution.

Further complicating the puzzle is the upward directional pull on the UK by the European Union. Granting authority to lower government levels presents a set of challenges for the UK as a whole, while simultaneously dealing with the EU overhead. It would seem that power, or more aptly stated, authority, is being pulled from the British centre in both directions. A natural competition for political power exists, giving an environment in which savvy political parties can play to their voters in many directions.

Party elites drive voter preferences, a fact that is exacerbated as polarization increases. Party leaders use an “us versus them” mentality to frame public opinion. While the central government is the deciding factor in many aspects of foreign affairs, the subnational governments also play a major role. Subnational elite leaders matter in framing the arguments and can either increase or decrease the level of polarization.  If we make the analogy to running a firm, centrality is important to the exercise of power. Within an organisation, firms that are closer in proximity to the company’s headquarters exhibit signs of increased control by the governing board. In a similar vein, a region that lies in close physical proximity to the central government unit is subject to the increased exercise of control over that region. Then, as physical distance from the political centre increases, this effect should diminish. This would provide greater latitude and leverage in framing public opinion for the subnational leaders of regions farther from the centre.

The British Election Study conducted survey interviews between February 2014 and June 2017. Respondents were asked, “If there was a referendum on Britain’s membership of the European Union, how do you think you would vote?” Options were vote to leave, vote to stay, or refuse to vote. These surveys provide insight to voter’s decisions on the Brexit vote both before and after the actual vote occurred.  These responses are examined with regards to the country from which the respondent comes including a calculation, in miles, of the distance between their political centres. Additionally, respondent’s left-right ideology is examined to determine party influence. Euroscepticism is also added as another potential indicator.

Figure 3 shows that as the distance from London increases, the likelihood of voting to in favour of Brexit decreases when taking into account partisan affiliation. Figure 4 shows similar results, as the likelihood to vote “Leave” decreases the farther a region is from London. Indeed, Euroscepticism has a much higher effect on voting decisions than left-right ideology. Wales and Scotland each exhibit a lesser likelihood of voting to leave across both indicators, although the results remain positive. The effect does not revert entirely to the alternative of voting to remain in the EU. However, the effect is clearly diminished as physical distance increases.

A clear correlation exists between partisanship and the decision within the UK to leave the European Union. This effect is evident as well in regard to Eurosceptic positioning. This relationship also exhibits effects in light of the region’s physical proximity to London. The effect of ideology and Euroscepticism are weaker in Wales than in London, while Scotland shows even weaker effects. Clearly, England exerts more control over Welsh politics than it can Scottish politics, in large part due to physical closeness.

This post represents the views of the author and not those of the LSE Brexit blog, nor of the LSE.

Ryan Lux is a PhD Candidate at the University of Texas at Dallas. 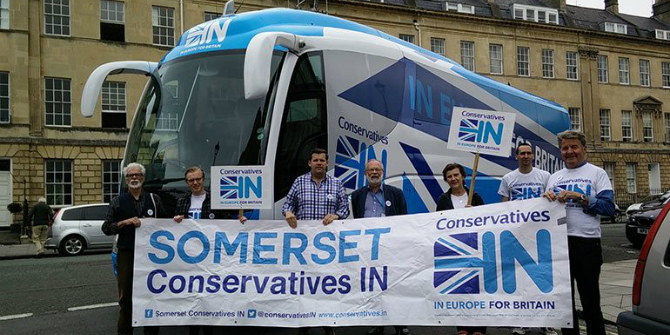 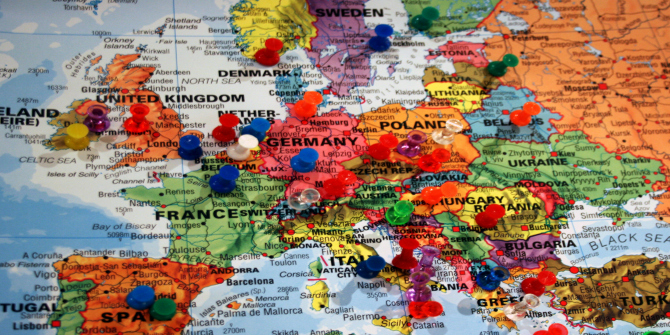 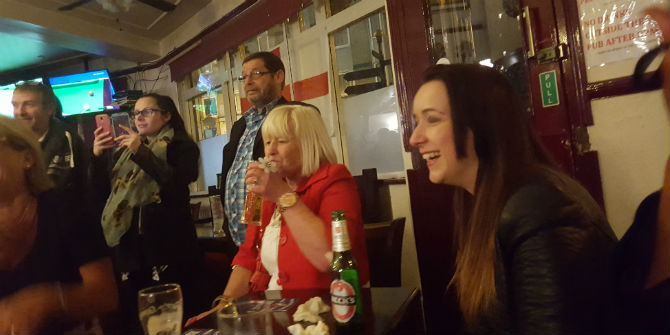