What’s happening to European solidarity in the wake of Brexit? In this blog, Nicholas Charron and Monika Bauhr (University of Gothenburg) explains EU citizens’ attitudes towards cohesion policy. They find that less than one-half of EU citizens have even heard of the policy itself, while roughly one-third claim they have ‘benefitted from some EU project in their area’. They also observe that attitudes on support for EU economic integration have a lot to do with how people see home institutions and the degree of their European identity.

As the European Union enters into the next decade, its leaders are seemingly more ambitious about future integration rather than less, despite the recent setback of Brexit and the rise of anti-EU populists. In his state of the Union in 2018, Jean Claude Junker emphasized several ways forward – ‘European solidarity’, ‘rejection of exaggerated nationalism’, and support for ‘balanced migration reform’.  Yet he did not mention one key policy tool for achieving a closer Union – Cohesion Policy and the Structural Funds, which are “the only real, significant redistributive mechanism in the EU…[1]” and consistently constitute the second largest item in the EU’s budget.  As Cohesion policy essentially redistributes resources from wealthier EU countries to poorer EU regions, it creates winners (net recipients) and losers (net donors), it has been a target in anti-EU rhetoric, including in the lead up to Brexit.  Despite elite commentary, we know surprisingly little about EU citizens think of the rationale behind the policy of Cohesion – e.g. economic redistribution within the EU.

As part of a Horizon2020 project, we launched a survey to investigate how citizens feel about economic integration within the Union, where 17,200 citizens were interviewed.  In addition, people were asked a set of questions on knowledge and experience with the EU’s regional policy, along with how one identifies with Europe, political attitudes and perceptions of institution and the economy.  Consistent with previous Eurobarometer surveys, we found that less than one-half of all citizens (roughly 45%) have even heard of the policy itself, while roughly one-third claim they have ‘benefitted from some EU project in their area’. EU citizens are lukewarm on the idea of Cohesion – just over half say that they ‘somewhat agree’ with continuing the policy, while just under 6 in 10 want their country to spend about ‘the same’ as it does now, as shown in Figure 1. We also observe strong opposition to Cohesion, while some appear very supportive. Our main two explanations for why citizens vary in their attitudes on support for EU economic integration are ‘benchmarking’ (using attitudes about one’s home institutions) and ‘identity’ (how strongly one identifies as European vis-à-vis one’s home country and how one conceives of ‘being European’). 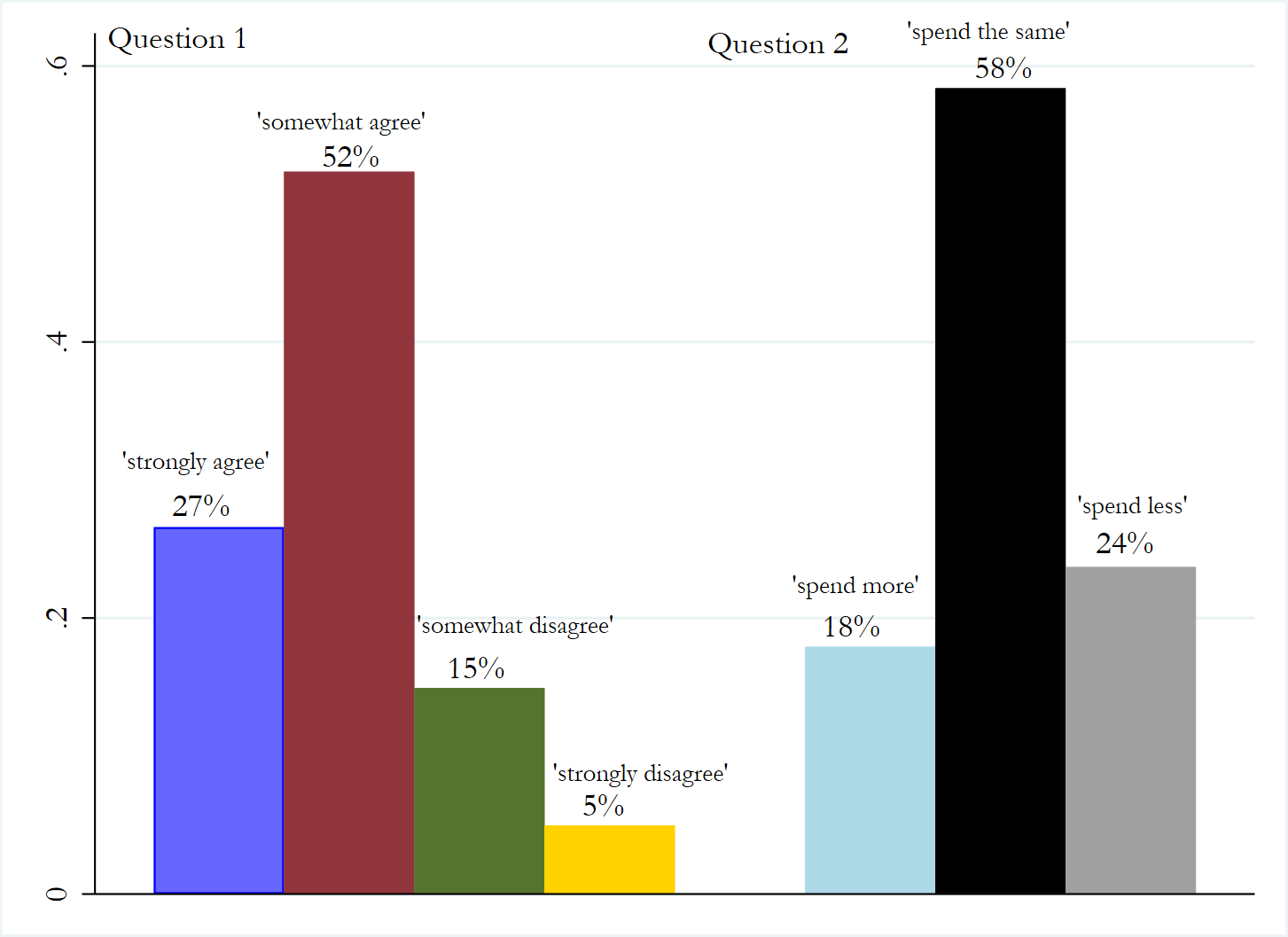 Note: All respondents are given some priming background information about Cohesion policy, and then asked: Question 1, “In your opinion, the EU should continue this policy, where wealthier countries contribute more, and poorer EU regions receive more funding.” 1. Strongly agree, 2. Agree, 3. Disagree, 4. Strongly disagree, 5. don’t know.  Question 2, preferences for one’s home country spending on Cohesion: ‘In your opinion, compared with what it spends today, should (COUNTRY) contribute, more, about the same, or less to this EU policy? 1. More, 2. About the same, 3. Less’. Weighted responses shown.

With respect to ‘benchmarking’, we focus on the perceptions of corruption that citizens hold for their home institutions as well as for the EU.  The x-axes in Figure 2 show the relative perceptions of corruption, with values further to the right (left) indicating that people believe their national institutions are more (less) corrupt than the EU. The findings reflect what some call the “compensation effect” – that while high perceptions of national corruption undermines support for actions made by domestic governments (including redistribution), it in fact leads to greater support for EU integration. In other words, people who believe that domestic politicians misuse their taxes would rather have the funds handled by the EU.

Figure 2: Perceptions of Corruption and Support for EU Cohesion Policy 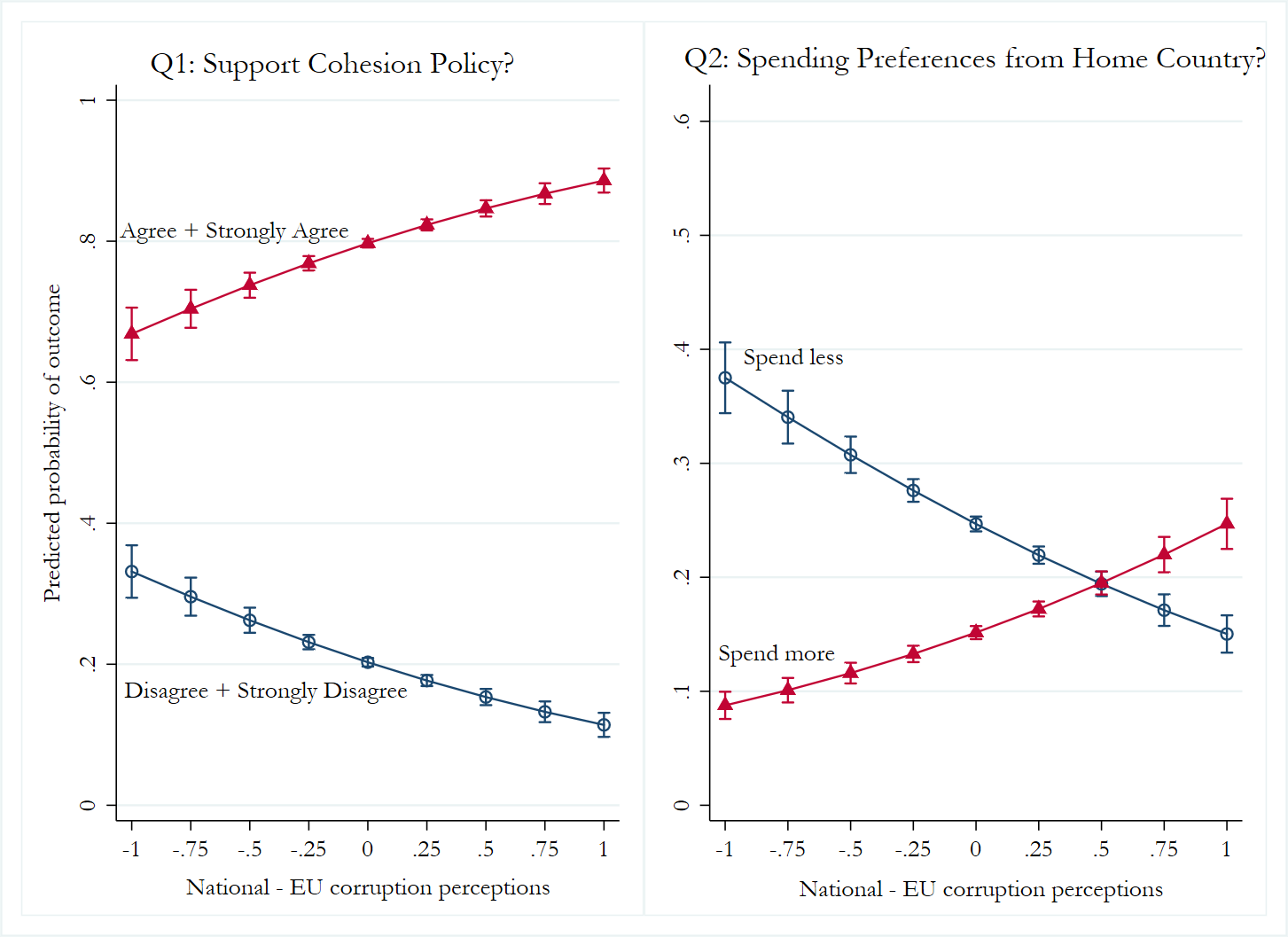 Note: model 1 is a logit model and model 2 is an ordered logit model.  Control variables and country fixed effects and design weights included.

Second, we look at ‘identity’ in two dimensions. First is the strength of one’s attachment to Europe (as well as one’s home country).  Second is how people conceive of what ‘being European’ is – does it mean we share a common religion (Christianity) or is it having a set of common civic institutions and symbols, such as a common market, flag, passport, etc?

On the question of ‘strength’ of identity, our results largely confirm many previous studies on public support for EU integration – that national attachment has a negative effect, while EU attachment increases support, all things being equal.  Yet what do people in fact mean when they say they identify strongly with ‘Europe’?  We ask several questions about what is important for people when they think of what ‘being European’ is.   We then construct a measure that subtracts a ‘civic’ identity with Europe from a more ‘religious’ identity with Europe.  The results in Figure 3 show that people who regard Europe as religious rather than civic are less likely to support Cohesion policy and prefer their home country to invest less in the policy in general.  Our main take-away from this is that how one conceives of ‘Europeness’ matters for support for integration. 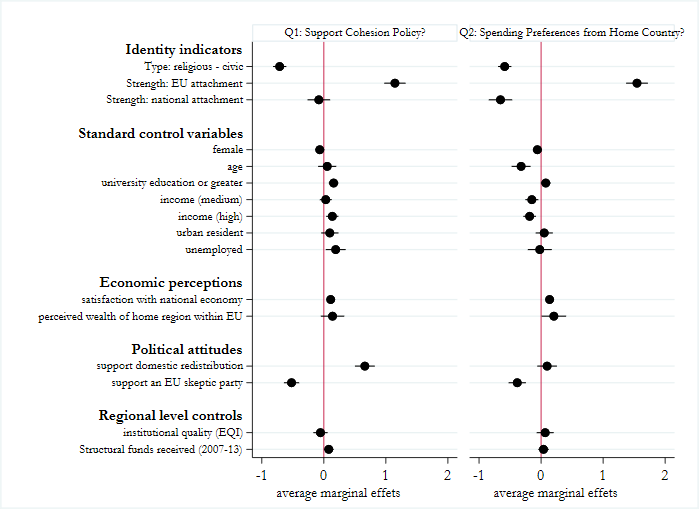 What about other factors?

In addition to benchmarking and identity, we also looked at typical ‘rational’ explanations – meaning if they were ‘winners’ or ‘losers’ economically from the policy.  We find little evidence that individual level factors such as income, one’s position in the labour market, or regional factors such as Structural funds received and GDP per capita play a systematic role in assessing support for Cohesion policy. We do however find that perceptions affect support somewhat – perceiving a better home economic and that one’s region is relatively wealth increases support for Cohesion.

As Cohesion is a foremost means of economic redistribution within the EU, the policy can be a sensitive topic to bring up in certain contexts, or even politicized as shown during Brexit.  Our research shows that the majority of citizens – mostly in donor areas – are in fact unaware of this policy, which leads to what we find as an ‘indifferent majority’ that expresses relatively soft support for the policy idea.  Stronger support for the idea of Cohesion policy comes from those that are strongly attached to the European identity, and who believe that ‘Europeanness’ is defined more inclusively (civic) rather than exclusively (religious). In addition, we find that support for the ‘compensation effect’, where people who believe their national institutions are corrupt would rather transfer more economic sovereignty to Brussels in hopes for better governance.

Nicholas Charron is Associate Professor in the Department of Political Science and a research fellow at the Quality of Government Institute at the University of Gothenburg in Sweden.  His work has mainly focused on the causes and consequences of state capacity and corruption, multi-level governance within the EU, public opinion and electoral behavior.  He is also the author and co-creator of the European Quality of Government Index (EQI), which measures ’quality of government’ and corruption at the sub-national level for over 200 regions in Europe.  His latest publications can be found in Journal of Politics, Comparative Political Studies, European Journal of Political Research, European Union Politics, Electoral Studies, West European Politics, and International Studies Quarterly.

Monika Bauhr is Associate Professor at the Department of Political Science, University of Gothenburg, and the head of the Quality of Government Institute. She has also served as a consultant and participated in public events relating to climate change, corruption and development policies. Between 2014 and 2017 she has been the Scientific Coordinator and Principal Investigator of the ANTICORRP (Anticorruption Policies Revisited: Global Trends and European Responses to the Challenge of Corruption), a large-scale multidisciplinary research project, funded by the European Commission. Her most recent work appears in journals such as the International Studies Quarterly, Global Environmental Politics, Governance, Comparative Political Studies and the European Journal of Political Research.