Labour is trailing in the polls and its manifesto has been attacked for profligacy. But the polls are a poor guide to the election outcome, as Theresa May’s ratings in 2017 show – and Labour’s spending plans are roughly in line with those of Germany, writes Danny Dorling (University of Oxford).

In April 2015 the Conservatives polled, on average, at 33.6% and their lead over Labour was only 0.7%. David Cameron went on to win a comfortable majority a month later. The Conservatives’ vote had risen by only 2.4 percentage points in May 2015; but Labour’s fell by 2.2. The Labour leader Ed Miliband resigned. Here, all polls taken in the UK over each month are used to produce and average for that month and the rate of change is calculated from the month before to the month after the month in question – except for the case of November 2019, as we do not know yet what the polls in December 2019 will be.

Table: Average support in the polls – % of those intending to vote, and change in that % in brackets

Note: Support for the Brexit party is included in the UKIP column – change is shown after each share and is change from the month before to the month after – per month (Thus 0.7 in Feb 2015 for the Conservatives is (33.5-31.1)/2).

In November 2019, given all polls reported up until November 23, Boris Johnson’s Conservatives stand at 40.1% in the polls, a lead of 11.4% over Labour – in both cases worse than May’s position a month before her disastrous general election. However, unlike May, support for Johnson’s Tories is still rising in November 2019. But so is support for Labour. More importantly, the Liberal Democrats’ support is dropping faster than it did in the run-up to the previous two general elections, suggesting people are planning to vote tactically. The percentage of those backing UKIP, the Brexit Party and the Greens also fell each month from September 2019 onwards.

How do Labour’s spending plans compare to the countries in the rest of the EU?

Will Hutton, writing in the Guardian, has described Labour’s spending commitments in its 2019 election manifesto as meaning that: “Social democracy is to be expunged from Labour’s ruling bodies – and an amalgam of green statist, top-down socialism and social democratic remnants is to take its place.” But is this true? The graph below show current public spending in selected European countries and the USA. Labour’s spending plans would move it to just below the position of Germany by 2024. For Hutton’s comment to hold water, Labour would have to aim to be Finland, which is currently governed (very well) by the kind of coalition he describes. Here are public spending trends in European countries, Japan and the United States, as a proportion of GDP. In all the countries public spending rose to bail out the banks in 2008, but before and after that the levels were very different. 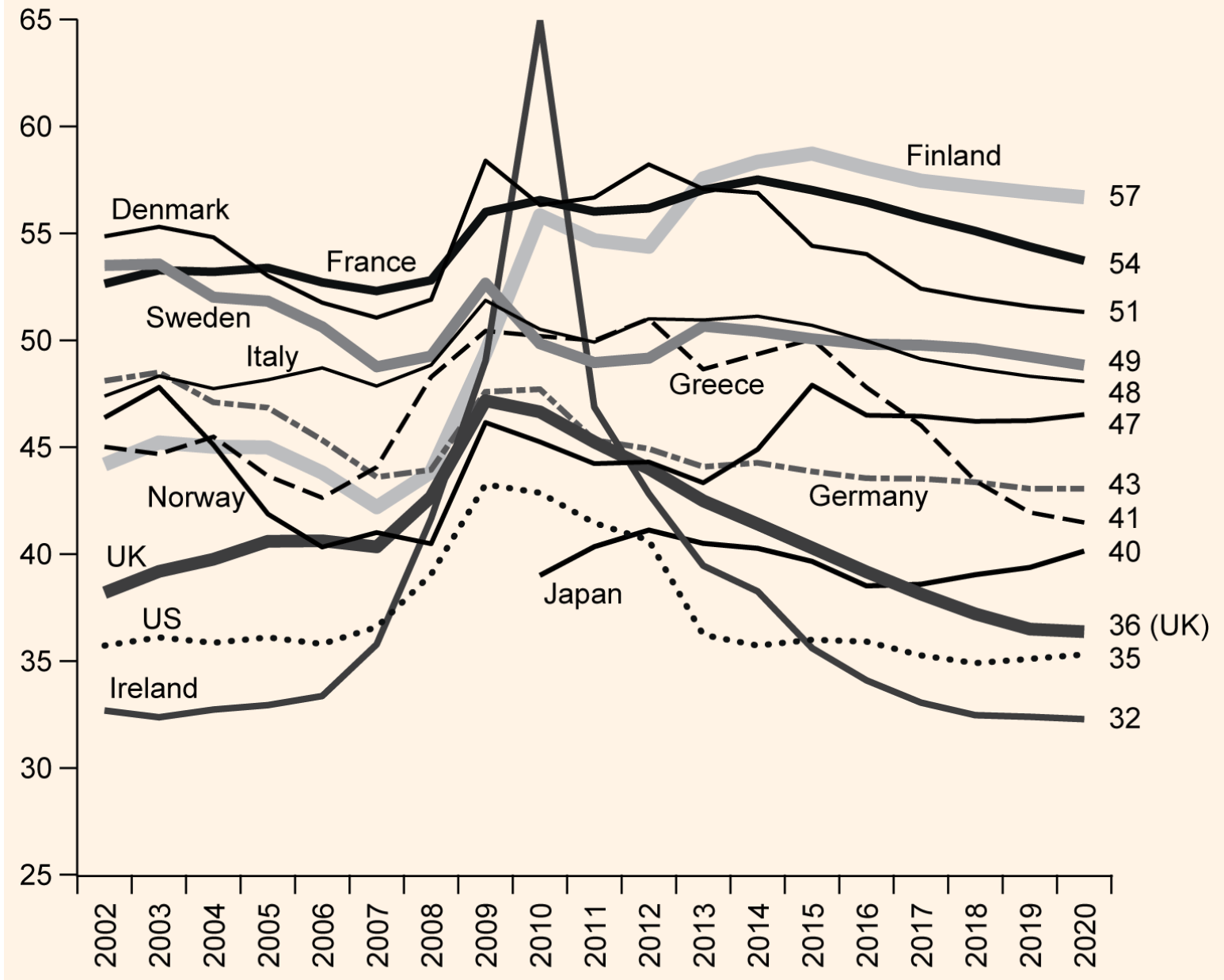 Source: The 2010, 2012 and 2015 IMF database, projections after 2014. The figure comes from A Better Politics: How Government Can Make Us Happier, by Danny Dorling

Danny Dorling is the Halford Mackinder Professor of Geography at the University of Oxford. A Better Politics: How Government Can Make Us Happier is available as a free ebook.

The curve of inequality and the Brexit Way October 15th, 2019