“It’s worth bearing in mind that when we talk about immigrants in this country, these are immigrants currently saving people’s lives”, Piers Morgan commented on Good Morning Britain last week. This statement would have rung true if said last month, last year, during the EU referendum campaign or at any time in the recent history of migration to the UK. These positive arguments about migration are rarely heard in the mainstream media. The unprecedented COVID-19 crisis brought about a change, at least on the surface, in the rhetoric on immigration. In this blog, Alexandra Bulat (UCL) argues that soundbites won’t help migrants – policy change will.

We all remember certain politicians telling us how low skilled migration needed to end after Brexit. ‘Ending freedom of movement’ and ‘taking back control of our borders’ have been two of the soundbites gleefully repeated by government ministers in Parliament since 2016. The UK’s points-based immigration system, proposed in February 2020, defined migrant contributions purely in terms of monetary contributions. Instead of levelling up rights, it levelled them down for EU migrants, and did little, if anything, to improve the rights of non-EU migrants.

Much of the political narrative about immigration in the UK applies a narrow economic definition of ‘contribution’ to categorise what types of migrants are desirable, and welcomed, and who should be subject to strict ‘control’. Language matters – the UK’s points-based immigration policy statement described EU migrants as ‘stock’.

This ‘high-skilled = good. Low-skilled = bad’ migration binary has been criticised, including in my own research showing how the public’s subjective interpretations of ‘low-skilled’ migration do not necessarily match policy definitions. In a recent LSE Brexit blog, Patrick McGovern explained how labelling migrants as ‘unskilled’ or ‘low-skilled’ makes it easier to justify their exclusion from society.

It has been less than two months since the government published their plans for a points-based immigration system designed to exclude ‘low-skilled’ workers who do not tick the right boxes on the points list. The news headlines about low-skilled workers being ‘banned’ or ‘barred’ from entering the UK are still fresh in many people’s minds. ‘Ending cheap foreign labour’ was supposed to be the UK’s ‘immigration revolution’, according to some tabloid media.

These low-skilled migrants include care workers, retail staff, and delivery drivers who are keeping the country safe and fed during the Coronavirus crisis. The ‘cheap foreign labour’, scorned on by some of the commentariat just a few weeks ago, are our neighbours and friends who volunteer alongside us to help other friends and neighbours in need. Suddenly, more and more public voices show appreciation for the contribution of migrants, and that contribution seems temporarily demonetised.

The problem is, of course, that praise in the media or in political speeches won’t get very far when migration policies are concerned. Policy changes are urgently needed to make sure that migrants in the UK receive the support they need in these difficult times. Going on radio or television and commenting how much you appreciate ‘our EU friends, neighbours, and colleagues’ won’t help anyone who is anxiously waiting for their settled status, while the Home Office EU Settlement Scheme Resolution Centre had to close during the pandemic. Showing appreciation for Indian doctors and Filipino nurses in the NHS won’t make it fair that non-UK migrants have to pay the NHS surcharge (and EU migrants will be subject to the same rule when the new immigration system is implemented), which is set to increase to £624 a year in October 2020. No amount of praise on social media will bring together the thousands of families separated by the minimum income requirement policy.

I’ve been a campaigner on EU migrants’ rights since 2017. I focus on the EU Settlement Scheme, which is only one of the many immigration policy areas that need to change to ensure migrants are not left behind and are treated fairly. Some may assume that the rights of EU citizens in the UK are a done deal. I regularly speak to people who are convinced that EU migrants in the UK all have an automatic indefinite leave to remain, just as promised by Boris Johnson and others when campaigning for Vote Leave in 2016.

The reality is far from what had been promised. Securing ‘settled status’ (indefinite leave to remain under the EU Settlement Scheme) is not easy for everyone. In the current COVID-19 crisis, the system produces even more anxiety and worry for EU citizens and their family members. the3million, the largest organisation campaigning on EU migrants’ rights in the UK, recently submitted evidence to the Home Affairs Select Committee on how EU citizens and their family members will be impacted during the pandemic.

There is no automatic granting of indefinite leave to remain for EU citizens as promised in 2016. EU, EEA, Swiss citizens and their non-EU family members have to make a successful application to receive pre-settled or settled status. While securing their status was difficult for some before the pandemic, it is increasingly more difficult now. Most lines of support and advice are closed. The voluntary sector, already overstretched, is struggling to adapt as many services to the online space with limited funding.

The COVID-19 situation means that it will be more difficult for people to get advice if they need it, to actually submit the application (and impossible at the moment if they need to send in physical documents to the Home Office) and it will take much longer to receive a decision. This legal limbo already affects some migrants, such as the non-EU family member who answered the3million’s call for evidence last week. He explained how after losing their job in March, his family could not move to cheaper accommodation because the landlords would not accept his certificate of application for the purpose of to rent checks. They were also refused Universal Credit.

Last month saw a record number of people applying for Universal Credit. COVID-19 can affect anyone and there will be many more who will need support. More than a third of those who applied to the EU Settlement Scheme receive ‘pre-settled’ status, which is a form of limited leave to remain in the UK for five years. One of the key differences between the two forms of status is in the rights to welfare. Those with settled status have the same rights to welfare as UK citizens. However, pre-settled status does not automatically count as ‘right to reside’ for the purpose of welfare benefits. The non-EU family member referred to earlier had pre-settled status. He was refused Universal Credit as he failed the ‘habitual residence test’. Like many others, he is worried about how to make ends meet for his young family.

Another example of something that is not well-known amongst the public is that to be granted settled status, one needs to prove they have continuously resided in the UK for five consecutive years and be able to evidence at least six months every year. When the COVID-19 pandemic started, some EU migrants and their family members decided to leave the UK to be closer to relatives and families who need support in their country of birth or other countries. One of the concerns highlighted by the3million in the HASC submission was precisely on this issue: how will these citizens maintain the continuity of their residence if they are unable to return to the UK safely for a longer period of time?

These are just a few examples of how what some may dismiss as policy detail has a real and lasting impact on the lives of migrants. There are many unanswered questions on a whole set of issues, with several migrants’ rights organisations calling for scrapping policies that make their lives even more difficult right now, such as the minimum income requirement, ‘no recourse to public funds’, and the NHS surcharge. The solutions we need during the COVID-19 crisis are incompatible with the hostile environment policies.

The COVID-19 crisis is a wakeup call to reassess our values as a society. More of us realise that anyone can face financial difficulties unexpectedly and need to access welfare support. We can all see that ‘low skilled’ (more accurately, low paid) workers are likely the people who support us the most during this pandemic. When we meet migrants in our local volunteer networks, we see them as people, not as numbers. While the public attitudes on immigration seem to soften, the negative impact of successive governments’ immigration policies on migrants’ lives still carries on.

The values that hold our society together during these difficult times are the antithesis of the hostile environment policies affecting migrants every day. We all want the same things: to feel secure, to be able to access support when we need and for our families to be safe and healthy. The last thing migrants need now is to be denied support and face even more uncertainty over their status. Migrants are part of our communities; they are not commodities. It’s time for a narrative shift that translates into policy change. Please keep in touch with and support those organisations linking arms right now to bring about this change.

This article gives the views of the author, and not the position of LSE Brexit, nor of the London School of Economics. Image: Simon Davis/DFID.

Alexandra Bulat is a migration researcher who recently submitted her PhD thesis on attitudes towards migration at University College London. Alexandra works part-time at the3million, the largest organisation campaigning for EU migrants’ rights in the UK. She is also a volunteer OISC immigration adviser at the charity Settled, assisting EU citizens with their (pre-)settled status applications. Alexandra tweets on citizens’ rights @alexandrabulat. 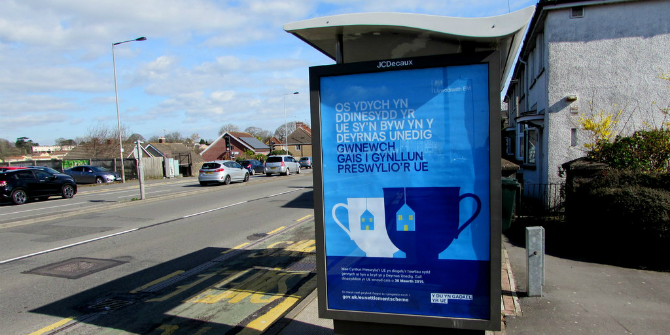